A nail-biting finish is on the cards if recent results between these teams is any guide, with South Sydney and Manly having already played out two one-point thrillers this season.

The Sea Eagles prevailed 13-12 at Lottoland back in round four while the Rabbitohs had their revenge with a 21-20 win at ANZ Stadium in round 17.

They had the Roosters' measure twice during the season but the Rabbitohs were no match for the premiers when push came to shove in the opening week of the finals.

Souths diehards pointed to the atrocious start to the game, the lack of decent possession and the absence of stars Dane Gagai and Sam Burgess, but there's no room for any excuses when the stakes are raised even higher this week.

Burgess should be not only jumping out of his skin to play, he owes it to his team-mates to live up to his superstar status and deliver an inspirational performance similar to the one he produced in the 2014 grand final.

The Sea Eagles have proven they can't be taken lightly after ending Cronulla's season despite having the likes of Martin Taupau, Tom Trbojevic, Joel Thompson and Curtis Sironen stuck on the sidelines.

Taupau returns from suspension this week and Des Hasler's side will again feel they have nothing to lose with the club having already surpassed expectations this season.

Rabbitohs: The return of captain Sam Burgess (suspension) and centre Dane Gagai (hamstring) is a huge boost for the Bunnies who will line up 1-17 as named. Burgess replaces Jaydn Su'A while Gagai's return sees Campbell Graham go to the wing and Corey Allan drop out. Tom Burgess has been named to start after coming off the bench last week and he swaps with brother George, who goes to the interchange. Kyle Turner and Dean Britt were the first two cuts from the extended squad on Thursday. Su'A and Allan made way an hour before kick-off at ANZ Stadium.

Sea Eagles: Des Hasler's men are 1-17 with Martin Taupau back on board after a week's suspension and starting alongside Addin Fonua-Blake in the front row. Sean Keppie drops back to the bench while Toafofoa Sipley is out of the side. Tony Williams and Tevita Funa were the first two omitted from the squad 24 hours before kick-off while Lachlan Croker and Toafofoa Sipley were the final cuts an hour before game time. The Sea Eagles have lost their past nine games at ANZ Stadium.

His side didn't win and he was overshadowed by former team-mate Luke Keary, but a light bulb must've gone on in Souths halfback Adam Reynolds' head in the second half of last week's loss to the Roosters. Reynolds showed he's at his most dangerous when he runs the ball more often, swerving and ducking defenders to score the Bunnies' only try. The experienced No.7 has to go close to matching Manly, Queensland and Australia Test star Daly Cherry-Evans if the Rabbitohs are going to prevail.

As mentioned Reynolds has to make sure to pack his full bag of tricks, while his halves partner Cody Walker needs to bounce back strongly after being keptquiet last week. Sam Burgess has to prove he is still this team's No.1 leader and keep his discipline in check, while Cam Murray and Damien Cook need to keep defenders guessing with quick feet in the middle of the field.

The lesser lights will need to step up again. Addin Fonua-Blake was inspirational  up front last week and will need to repeat the dose against Burgess and friends, and if the Sea Eagles pack can get a roll on then dynamic dummy-halves Api Koroisau and Manase Fainu can cause havoc against the Rabbitohs' big men. Cherry-Evans' performance will once again be crucial as the team's focal point in attack in the absence of Tom Trbojevic.

Good news for Souths with Sam Burgess back. Wayne Bennett admitted he got his back five rotation wrong last week and they got blown off the park. It'll take a great mental readjustment after a heavy loss. Des Hasler came up with a masterclass victory against Cronulla. Fonua-Blake and Cherry-Evans were great. The battle of the forwards will be really important in this game. For South Sydney to win it'll come back to their discipline improving and a high completion rate, because they rely on that quite heavily. If the don't do that they won't win the game. Rabbitohs by 4.

These teams are chalk and cheese when it comes to second-phase play this season. Only the Eels have made more offloads this year than Manly's 307, while South Sydney make the second-fewest offloads per game of any team in the competition. Minor premiers Melbourne is the only club that throws offloads less often than the Rabbitohs.

The Sea Eagles haven't beaten South Sydney twice in a season since 2010. Manly's leading try-scorer that season was Tony Williams, with 16. 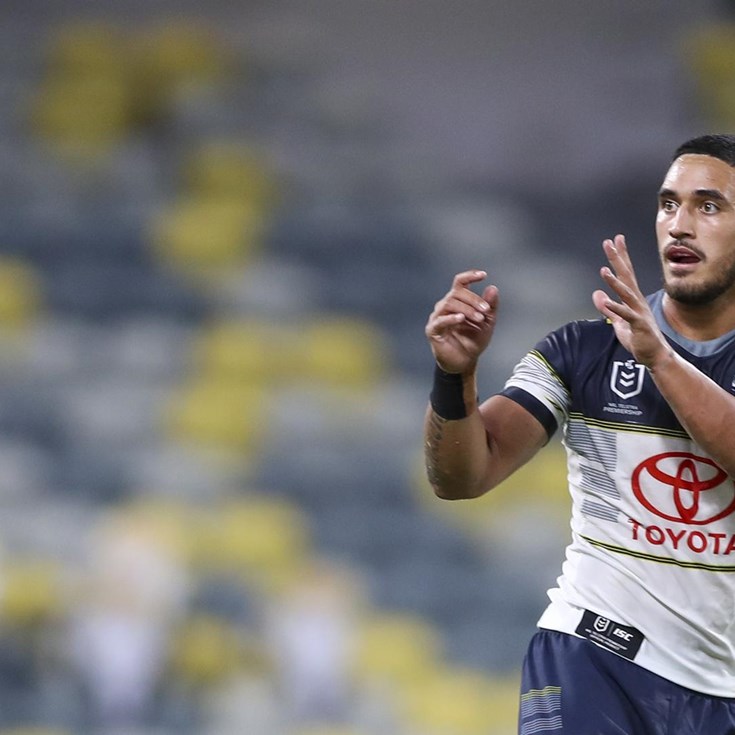