Gehamat Shibasaki and Jayden Brailey scored their first tries in Newcastle colours as the Knights went on a points-scoring spree with a 10-try, 58-0 drubbing of an under-manned Roosters outfit at Central Coast Stadium.

Three tries in the first half was only the entrée to seven in the second – scored by nine players with Mitch Barnett the only one to score a double. Brailey scurried over from dummy-half pushing through several defenders to score. The former Sharks rake was joined by former Broncos back in Shibasaki in getting their name on the score sheet.

Newcastle was supposed to easily win this one, especially after the Roosters named their side on Thursday – just two days after landing back in Sydney from their World Club Challenge triumph. Their team was devoid of any of their premiership or WCC players.

In contrast the Knights' starting side is expected to also be the 13 that face the Warriors in round one on March 14.

For the Roosters, probably few if any will re-surface against the Panthers also on March 14. Just four players in their 17 at Gosford – Lachlan Lam, Drew Hutchison, Matt Ikuvalu and Poasa Faamausili – had any NRL experience, with none of them more than 13 games.

Nonetheless Adam O’Brien’s men wanted to make amends for the embarrassing 38-12 loss to the Dragons in Maitland a week ago, and get some momentum going for the upcoming 2020 season. And for the majority of the second half their star players like Mitchell Pearce, Kurt Mann, Kalyn Ponga and Brailey were watching from the bench.

You have to venture back to 2016 to find a Trent Robinson side held scoreless, albeit this is only a NRL trial. The Roosters suffered two heavy losses in 2016 during the regular competition in a forgetful year for the Bondi Junction club, who finished 15th on the ladder.

The second-string Roosters side started with some verve, more than holding their own over the opening 20 minutes, muscling up in defence and making good ground in their sets of six.

But after Hymel Hunt’s crossing in the right corner was disallowed for a forward pass from Ponga, that seemed to strike a match within the Knights.

They scored three quick tries within 10 minutes through Barnett, Brailey and Ponga – who also converted all three – to race to 18-0. That remained the half-time score.

Ponga’s four-pointer was a beauty as he began his acceleration the moment Mitchell Peace was handed the ball, which he placed perfectly to catch his fullback on the fly.

In the second half Mason Lino took over the No.7 duties with Kurt Mann remaining at five-eighth for the opening 10 minutes. Ponga was also rested with Tex Hoy slotting into fullback.

The Knights announced earlier today that 20-year-old Hoy had been elevated to the Knights top 30. He celebrated with a fine 30-metre individual try in the 73rd minute.

O’Brien, the former Roosters assistant, walked over to Trent Robinson on the sideline to shake his hand, plus that of chairman Nick Politis, before kick-off. Just as well – they might not have been in the mood after absorbing that kind of defeat in the famous Tricolours jersey. 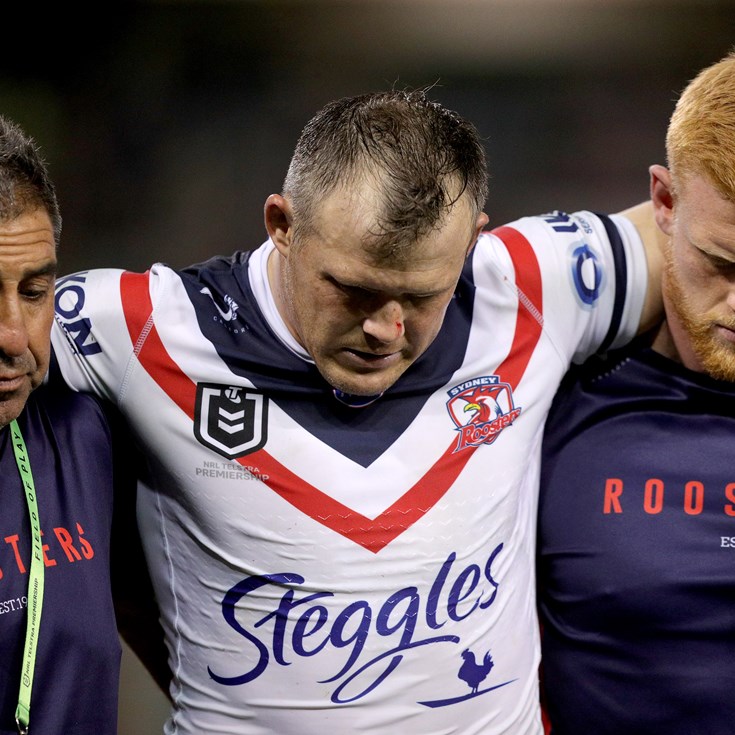 Suaalii one of a few options for Robinson