Valentine Holmes, Scott Drinkwater and Jason Taumalolo led the Cowboys to a dominant 36-6 win over the Titans at Queensland Country Bank Stadium on Friday night.

A shut-out in the second half by the Cowboys saw them secure their second win for the season with the loss the Titans was their 14th in-a-row stretching back to 2019.

Holmes racked up three try-assists in a match in which Ben Hampton and Reece Robson both crossed for doubles.

Robson's impact off the bench was impressive, with his crisp service from dummy half and nose for a gap in the defensive line evident.

Taumalolo was limited to just 76 metres in the first half, but responded with a superb second half that pushed his match total to a game-high 290m.

The Titans had the worst possible start with a fumble from Tyrone Peachy in the first set for his side. That mistake compounded by a six-again set with an attempted intercept by Jonus Pearson piling on the pressure for the away side.

North Queensland threw everything they had at the Titans off the back of their glut of possession.

However, the Titans' defensive line held firm including stopping a scrambling Jake Granville from dummy-half with the Cowboys hooker held just short of the line.

Eventually, the Cowboys were able to crack the line with Drinkwater and Holmes linking up to put Hampton over untouched.

After barely touching the ball for the first 10 minutes, the Titans scored off the back of three consecutive sets with Brian Kelly fooling the Cowboys with a brilliant show of footwork.

Moments later, a Kyle Feldt counter-attack from his own line gave the home side 60 metres with an excellent short-ball from Drinkwater put Justin O'Neill over to give the Cowboys a six-point lead.

After a surging run from Dale Copley, the Cowboys found themselves down a man when Mitchell Dunn was sent to the sin-bin for a professional foul but poor service to Taylor resulted in an unhappy end to the attacking set.

Trailing 14-6 heading into the second half, Gold Coast absorbed plenty of pressure before hooker Nathan Peats secured an intercept pass on his own line to relieve the pressure.

However, Peats turned from hero to villain in the next set with a forward pass.

A barnstorming run from Jason Taumalolo and six-again set up the Cowboys attack, with Reece Robson spying a tiny gap from dummy-half and barging his way over to make it 20-6.

Robson made it a double minutes later after he wrong-footed the Titans defence on their own line, leaving him to dive over gifting North Queensland a dominant 20-point lead with as many minutes remaining.

Hampton bagged his second after another amazing display of passing from Drinkwater and Holmes on his inside, with two crisp passes putting the Cowboys winger over.

Kyle Feldt completed the scoring in the final minute. 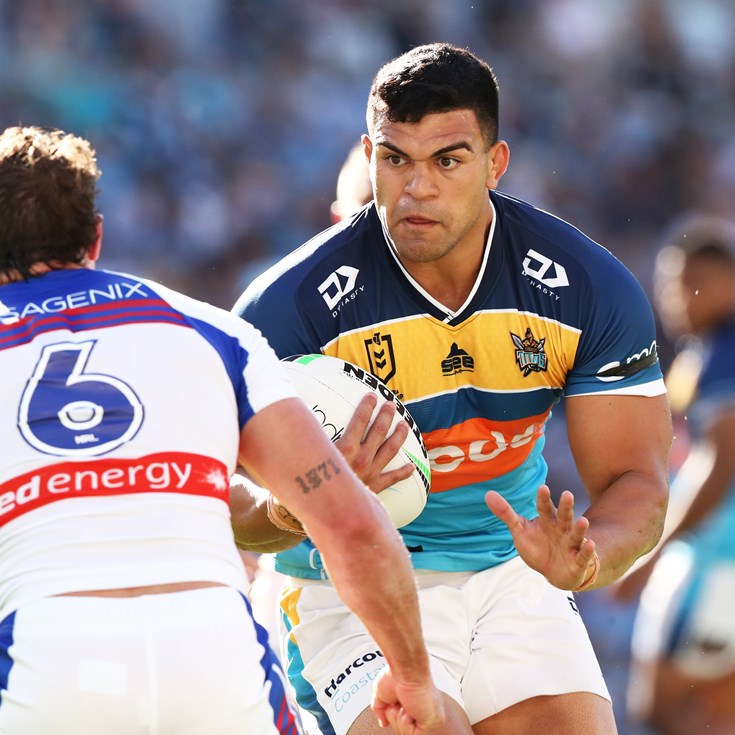 Hampton gets a double of his own