No Pearce, no Watson, no Ponga, no replacements, no possession, no luck. No worries.

Newcastle overcame the loss of star halfback Mitchell Pearce and hooker Connor Watson in the opening minutes against Penrith to snatch an unlikely 14-14 draw.

Already without suspended superstar Kalyn Ponga, injured hooker Jayden Brailey and forwards Mitch Barnett and Lachlan Fitzgibbon, Adam O'Brien's men had just 29 per cent of possession in the first half and conceded an eight-point try.

However, Newcastle bravely defended set after set to force the game to golden point before claiming an extra-time draw in a match Penrith coach Ivan Cleary conceded had been a lost opportunity for his team.

"I just felt we backed off a bit, we were happy with our lead," Cleary said. "They got a lot of confidence out of defending their line and from there it was going to be a dog fight.

"Credit to the Knights, they were very brave and kept finding a way to keep us at bay."

Capewell scores his first try as a Panther

By full-time, interchange hooker Chris Randall had completed 71 tackles – a record for a debutant – as the Knights were forced to make 85 more tackles than the Panthers.

Newcastle deserved to be the story on Sunday, regardless of the result.

Pearce, the captain and player who most of Newcastle's play revolves around, had to be assisted from the field in the fifth minute after being knocked out when he got his head in the wrong place while attempting a tackle.

Watson shifted from hooker to halfback and rookie Chris Randall took over the dummy-half duties but two minutes later he was lying on the ground after injuring his right ankle when fended off by powerful Panthers back-rower Viliame Kikau.

After trying to play on, Watson limped from the field in the ninth minute.

Twelve minutes later Glasby joined him and Pearce in the medical room for a HIA after an attempted tackle on Luke Capewell went wrong.

In between, fullback Tex Hoy – one of three Newcastle debutants whose parents were watching on from the upper tier of the eastern grandstand after being given exemptions - saved a try when he held up Dean Whare over the line and had a hand in preventing another.

Centre Enari Tuala tackled former NSW Origin winger Josh Mansour into touch to stop another try but there was no denying Kikau in the 19th minute when he stepped off his left foot and charged at the line from close range.

Ahead 6-0 when Glasby temporarily departed, the Panthers extended their lead after Capewell powered over five-eighth Kurt Mann, who was now also performing the halfback role, to score in the 23rd minute.

The Panthers were awarded an eight-point try after Newcastle winger Edrick Lee struck Capewell in the face with his shin as he tried to kick the ball out of his hands.

At that stage, it seemed only a matter of how much Penrith would win by but anyone thinking that hadn’t counted on the defensive resolve and courage of their opponents.

Pearce leaves the field in the first half

Glasby was cleared to return just before halftime and when Jacob Saifiti forced his way over for a try 12 seconds before the siren sounded, the Knights dared to dream.

Saifiti was forced from the field for a HIA but the Knights were growing in confidence and they got within sight of the lead when Glasby put boom centre Bradman Best over in the 59th minute.

Mann missed the conversion attempt but Best levelled the scores at 14-14 when he scored in the 68th minute after Lee batted back a kick from Mann and neither side could break the deadlock before full-time or after 10 minutes of extra time.

Rookie Panthers five-eighth Matt Burton had five attempts at field goal and Cleary praised him for stepping up to try and win the match in the absence of suspended NSW Origin halfback Nathan Cleary.

"I gave him a wrap, I thought he was really brave and he just kept standing up," Cleary said. "I've seen plenty of kids, either with field goals or goal kicks, when things are not going so well hand it over to someone else.

"I figured the more he took the closer he was going to get and that is how it turned out. He hit the post. He is pretty disappointed but it was his second game of first grade." 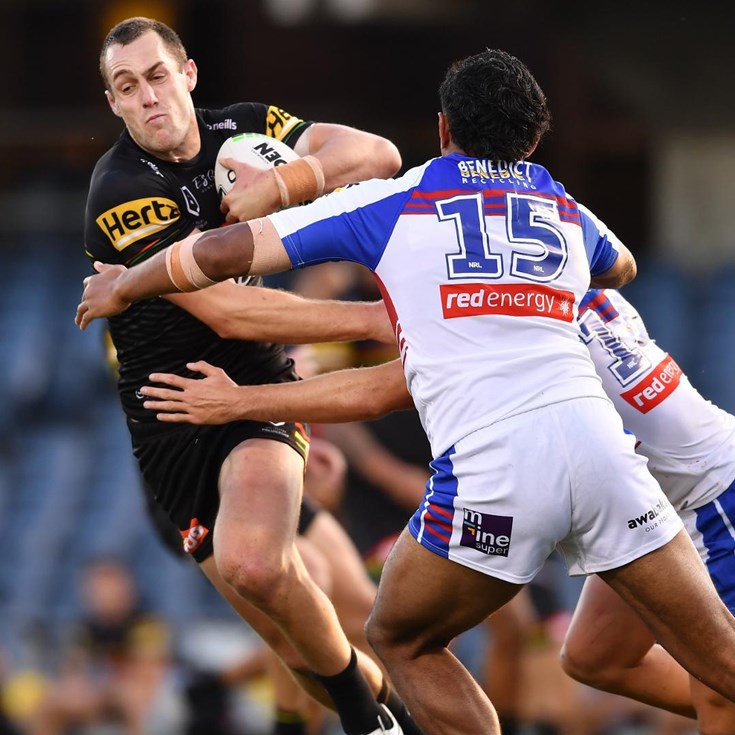