A forward pass that looked to go backwards, two tries in 60 seconds and Parramatta casting back to the decade of their dreams with their first 4-0 start to a season in 31 years.

Saturday night's clash with old foes Manly started with top billing, Des Hasler remembering wistfully during the week how "they wrote songs [beer ads] about Manly and Parra in the '80s and '90s".

By the end of the evening the Eels were 19-16 victors despite a second-half Sea Eagles fightback, a final minute match-winning try to Reuben Garrick called back controversially due to a forward pass.

Having fought back from a 16-point deficit early in the second half, Manly were away down their right through Tom Trbojevic, whose last pass to Garrick looped over the 20-metre line after appearing to come out of his hands backwards.

Trbojevic was diplomatic speaking on Fox League moments after full-time.

"You get those ones, disappointing one but that's footy I guess."

NRL head of football Graham Annesley admitted the call was wrong after full-time, cold comfort for the Sea Eagles and their fans.

For Parramatta it was their fourth-straight win to start the year for the first time since 1989.

That season the blue and golds finished ninth. The two previous occasions they went undefeated in the first month was in 1983 and 1986.

In a COVID-19-impacted competition they now sit top of the table, preparing for another grudge match with fellow highflyers Penrith next week.

Eels coach Brad Arthur conceded such a start bodes well for a fan-base deprived of premiership success for 34 years.

But the blue and gold faithful know the drill, and so does Arthur. Even in a year like 2020, competitions aren't won in the first month.

"It’s nice for our fans but we want to repeat that every game," Arthur said.

"We need to repeat our attitude and mentality. If we got beat on the death there tonight, if the pass had gone the other way, we have to go back and have a look how we let them back into the game.

"In terms of our attitude and mentality, that’s the priority for us right now. We've still got a long way to go."

Even without a crowd at Bankwest Stadium, Maika Sivo had them in raptures as he proved the difference and ultimately the backbone of a 12-2 half-time lead that belied a glut of early Eels possession.

Despite hammering Manly's line for much of the first half scores remained at 2-all (very '80s) until the half-hour mark.

It was then that Sivo produced his usual Bankwest magic, much to the appreciation of a cardboard cut-out crowd.

All 194 centimetres and 102 kilos of Trbojevic stopped Sivo a metre out from the tryline after a left-edge shift by the Eels.

But Sivo still spun 180 degrees in the tackle to basketball a superb pass in for Michael Jennings and an 8-2 Parramatta lead.

Jennings collects a Sivo offload for the opener

So it stayed until 20 seconds before the break until Sivo laid on another off a planned scrum play, where he hit a rugby union-esque line before offloading for an unmarked Dylan Brown.

When Kane Evans barged over moments later the Eels led 18-2 and another six-again infused blow-out loomed.

But Manly being Manly, they clawed their way back.

First through Jorge Taufua, the former Eels junior who scored his ninth try in 13 games against Parramatta.

Then Dylan Walker, who dummied and jinked his way through the line for an 18-12 deficit at 51 minutes.

Walker steps off the left to get Manly within six-points

Oregon Kaufusi should have put the result beyond doubt when he fell on a Reed Mahoney grubber, only to bobble the Steeden like it was one of the old wet leather numbers of yesteryear.

As possession evened up, the Sea Eagles threatened further.

Parramatta spent plenty of time getting acquainted with their tryline.

Up stepped Mitch Moses with a wobbly old field goal that rattled the woodwork, but still took the Eels out to a critical seven-point lead.

It was needed when Taufua barged over out wide once more with just two minutes to play.

From there Manly came calling again through Trbojevic and Garrick.

But for the drift of the ball and the referee's call, they would have had a famous win over their '80s rival.

Instead it was Parramatta singing. 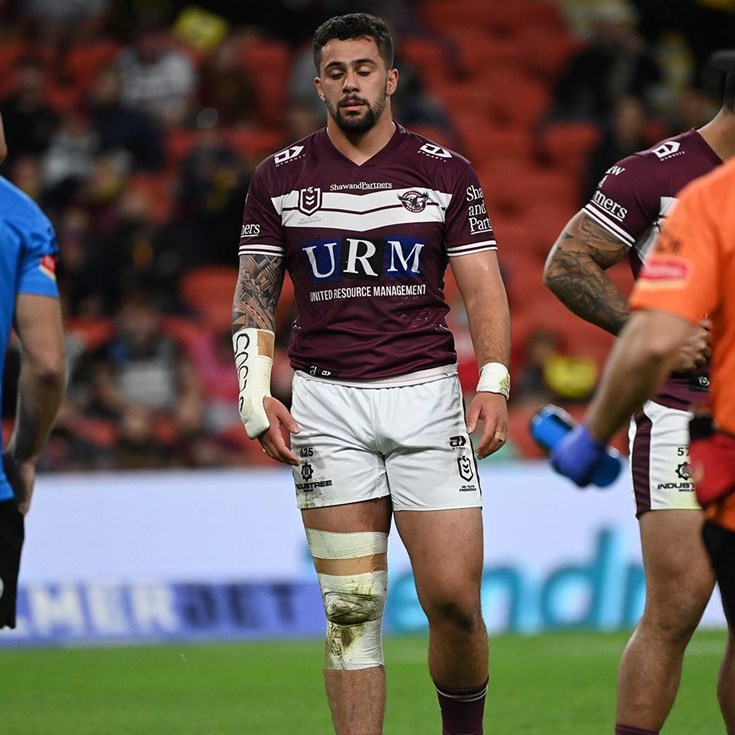