Raiders players ensured Ricky Stuart could celebrate his 400th NRL match as a coach on the long bus ride home to Canberra after coming from behind to defeat Wests Tigers 14-6 in a tense encounter at Campbelltown Stadium on Saturday night.

The Raiders rebounded from last weekend's 34-18 loss to Newcastle to move into equal second-place behind Parramatta but the Tigers made them work hard for the two competition points in greasy conditions.

Afterwards, Stuart was embraced by his players in the dressing room and they cheered as he skolled a beer to celebrate becoming just the eighth coach in NRL history to reach the 400-game milestone.

“It is a lot better feeling today than last week, I can assure you," Stuart said.

“That was a big win considering we were on the bus for three hours to get here and you have got to get off the bus to play a highly intense game. Those wins are very valuable when you have got to travel a lot.

“We got back to some of the standards we have been working on and building on over the last 18 months. We had to be very resilient tonight, they threw a lot at us. I thought defensively that was a very strong display and they dug very deep."

A stint in the sin bin by former New Zealand Test prop Russell Packer proved costly for the Tigers, with Canberra winger Nick Cotric scoring in his absence to put the Raiders out by eight points.

Packer was making his first NRL appearance since April 2019 and it was a night to forget as he was one of the Tigers players to miss a tackle in the lead-up to Jack Wighton's 49th-minute try and was also placed on report for a high tackle on Joe Tapine.

Raiders captain Jarrod Croker kicked a 68th-minute penalty goal from the incident to secure victory for his side.

“It was really important that we stayed on task and stuck to the plan we were working on all week," Stuart said. "That was what we spoke about at half-time. If things weren’t working for us not to get impatient and try to do it on your own."

Stuart revealed he had decided to start Jordan Rapana on the right wing ahead of Bailey Simonsson because he was expecting former Raiders centre Joey Leilua to be fired up for the match.

"They were very good mates at home but he had a job to do and he did it," Stuart said of Rapana.

"I thought it was important, [with the Tigers] having BJ on that edge with so much experience that I needed to match that experience with Jarrod and Jordan and obviously Jack there with Elliott [Whitehead]. They did a wonderful job."

Until Wighton scored, the Tigers appeared to have responded to Maguire's decision to drop captain Benji Marshall and four other players after last weekend's 28-23 loss to Gold Coast with a gritty and energetic first half.

However, the Tigers lost their way as the game wore on.

The first signs of the Tigers intent came in the second minute when hooker Harry Grant charged down a kick from Wighton and almost scored after Raiders fullback Charnze Nicoll-Klokstad fumbled the ball.

The enthusiasm which Reynolds is renowned was evident when the former NSW Origin five-eighth led the chase for his own kick and he and winger David Nofoaluma forced Nicoll-Klokstad into error near the Raiders line.

Reynolds then laid on the opening try of the match in the 18th minute with a short bomb on the Canberra try line that Curtis Scott fumbled into the arms of Tigers halfback Luke Brooks, who dummied and raced over to score virtually untouched.

At the other end of the field, the Tigers defence continued to repel the Raiders, with Grant stopping opposing hooker Josh Hodgson before the try-line and winger Tommy Talau halting Cotric in a similar position.

Brooks takes advatage of a loose ball from kick contest

A try-saving tackle by Rapana prevented Nofoaluma scoring just before half-time to keep Canberra's deficit to just four points at the interval.

Whatever Stuart said to his team during the break had the desired effect and they looked set to score early until a wayward pass from Wighton to Nicoll-Klokstad went over the sideline.

Wighton decided to run the ball himself the next time Canberra were near the Tigers line and he forced his way past several defenders to score in the 49th minute.

Jarrod Croker's conversion put the Raiders ahead 6-4 and things got worse for the Tigers when Packer was sin-binned for pushing Rapana to the ground as he attempted a quick tap after a penalty for a strip.

The Raiders took immediate advantage of the extra man, with halfback George Williams kicking for an unmarked Cotric to come racing through and pick up the loose ball to score in the 56th minute.

A Moses Mybe penalty goal put the Tigers within a converted try of their opponents midway through the second half but Croker restored the eight-point advantage with a penalty goal after Packer's high shot. 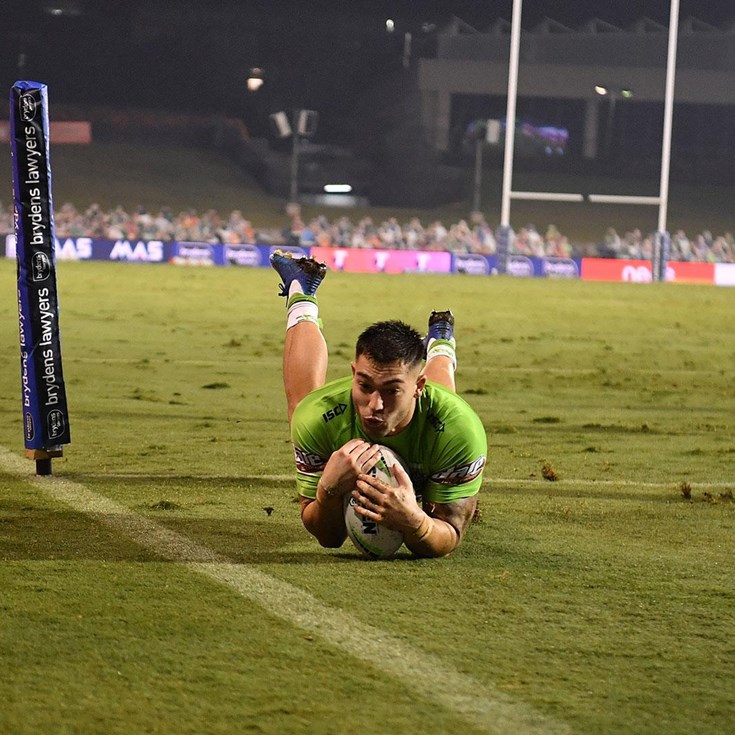 Brooks takes advatage of a loose ball from kick contest