Newcastle's unbeaten streak has ended but they remain nicely perched in fourth place heading into round six.

Adam O'Brien's men lost no admirers in a 26-12 loss to Melbourne in which they threatened to produce an almighty second-half comeback.

This round they're up against a Broncos side that showed character to narrowly lose to Manly in round five after being shellacked 59-0 by the Roosters the week prior.

Brisbane have lost one young gun but are set to regain some heavy artillery as they aim to get their season back on course.

New Knights hooker Andrew McCullough will face his former team for the first time after playing 260 matches for the Broncos.

Knights: Gehamat Shibasaki replaces Enari Tuala in the centres and Tim Glasby starts at lock, with Herman Ese'ese shifting to the bench. Lachlan Fitzgibbon returns from a hamstring injury in the second row, with Aidan Guerra moving to the bench and Brodie Jones out of the side. Pasami Saulo dropped off the extended bench on game day, while Phoenix Crossland and Starford Toa were cut from the squad 24 hours prior to kick-off. The Knights have won their past two games against the Broncos.

Broncos: New recruit Issac Luke comes into the game-day 17 for his club debut. Kotoni Staggs has been sidelined after suffering a hamstring injury at training on Sunday. Corey Oates goes back to the wing, Herbie Farnworth moves to centre to cover Staggs, Alex Glenn and Tevita Pangai jnr return in the second row and Joe Ofahengaue moves to the bench, with Rhys Kennedy out of the 17. Kennedy and Jamil Hopoate were omitted from the squad on Thursday night while Tesi Niu and Tom Dearden dropped out of the game-day squad. The Broncos have not scored after half-time in their past three games.

Mitchell Pearce has got Newcastle humming, using his vast game-management experience to pull the strings. The opposite halfback, Brodie Croft, has shown glimpses of his best but may have been a tad disappointed last week as the Broncos didn't capitalise on an 18-point lead. 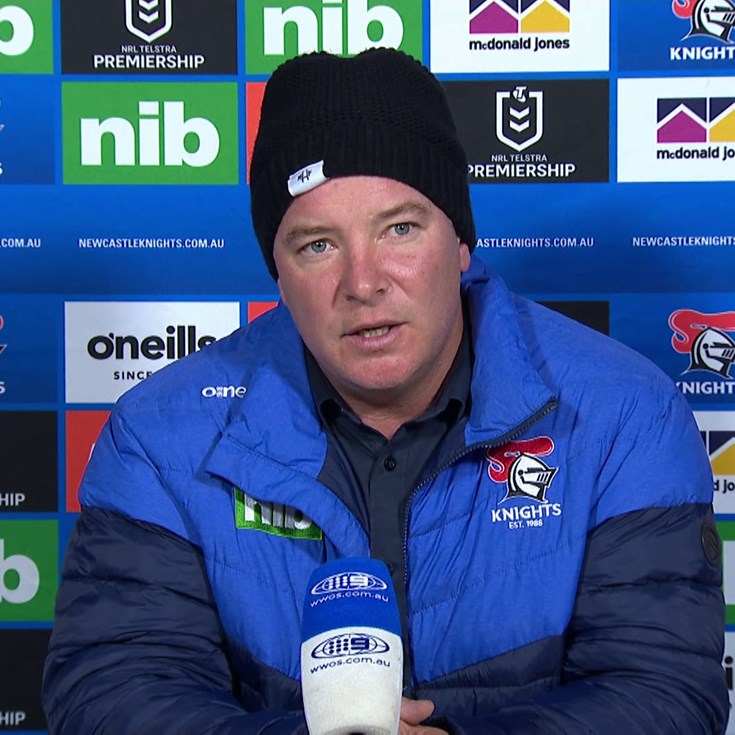 Carrigan sent to sin-bin for late contact on Pearce

Coates turns on the speed after interception

Mann threads the needle for Hunt