Marquee playmaker Ben Hunt remains determined to reclaim the No.7 jersey this year but is willing to bide his time at hooker if the team continues to build following their first win of the season.

Dragons coach Paul McGregor pulled the trigger with a plethora of last-minute changes in Sunday's upset win over the Sharks with Hunt's move considered a long time in the making.

His switch to hooker via the bench meant Dragons captain Cameron McInnes shifted to the unfamiliar role of lock.

Both men produced quality performances in response to McGregor's changes with the same scenario likely to occur when the Dragons travel to Brisbane for their clash with the Titans on Saturday.

"It's is not my preferred position but I didn't mind it and at the end of the day I want to win," Hunt said.

Round 6 - Taupau out, Hunt back to the bench

"[Cam's] the same, he just wants to win games as well. He likes to play nine but end of the day he wants to win.

"It's been a long, hard, trot down here and if I can help us win at nine then so be it. I'm not overly accepting of it but know it my head the game and how I've been playing.

"I haven't been playing up to scratch, there's no hiding that. Long-term I want to play in the halves but at the moment if this is what's best for the club I'm more than happy to do it."

Centres are the centre of attention again

Hunt refuted suggestions made last week that he had conversations with McGregor offering to be dropped from the team altogether given his own poor start to the season.

"We had conversations and it's pretty obvious to everyone I haven't been playing well but I never said I didn't want to be in the team," Hunt said.

"Another conversation was when he moved me to nine I said I understand the decision to do that.

"I never asked to be demoted. I knew there would be changes to the team. I wasn't expecting it but had a feeling it might happen.

"I understood that and wanted to get on with life. There's no point sitting around and sooking about it, that's not going to get me back in the seven jersey.

"It's just about playing good footy and getting me back enjoying myself and playing well. If the opportunity comes up I need to be ready to take it on.

"Obviously it's not going to happen overnight, I need to do a lot of the right things at training and in games and get back to playing the style of football I can."

Fullbacks in the frontline dominant in Round 5

Hunt's emotions spilled out when the Dragons secured their first win of the year with the Australian representative visibly celebrating in the sheds with his teammates post-match.

"It was a relief, I just wanted to have some more fun and get some enjoyment in the place," he said.

"It's been a long couple of months for us here, everyone's down and I just wanted to celebrate the win. I wanted the boys to get around it and enjoy it as much as possible.

"There's a little bit more positivity this week coming into video, everyone's bouncing around with a bit more of a smile on their face and enjoying things so it's quite nice." 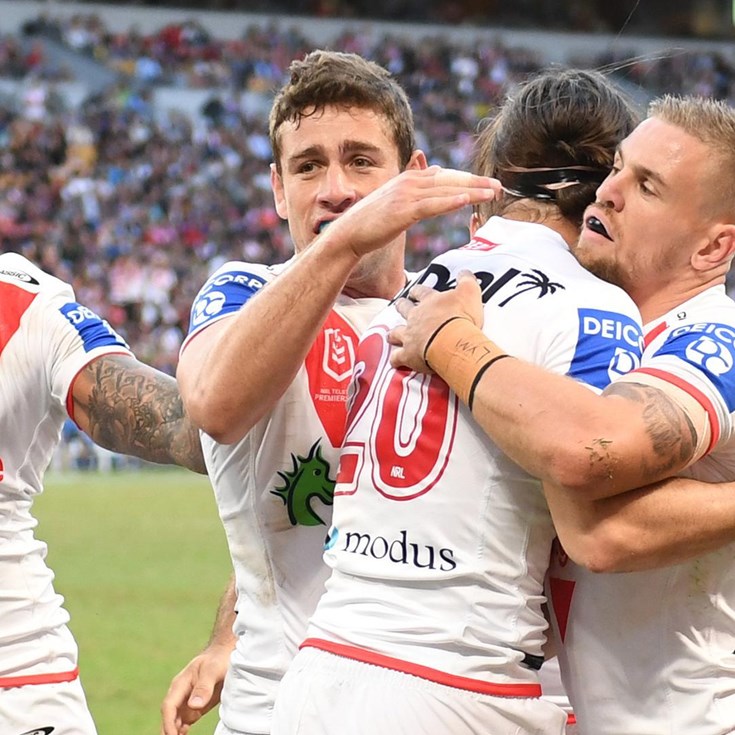 Hunt: Don't let the team down