Manly will limp into the latest installment of their famous rivalry with Cronulla after injuries to key men Tom Trbojevic and Dylan Walker.

But as they showed in beating the Raiders after the pair went down last weekend, the plucky Sea Eagles can never be discounted.

The Sharks probably won't have much sympathy for their old foes, who beat them in two brutal grand finals in the 1970s.

That will surely be on the Sharks' minds as they shoot for back-to-back wins.

Sea Eagles: Sean Keppie will start the match in jersey No.16, with Martin Taupau to come off the interchange bench. Morgan Boyle and Abbas Miski were the last two players dropped from squad. Tom Trbojevic (hamstring) and Dylan Walker (ankle) are out with Brendan Elliot moving to fullback, Lachlan Croker to five-eighth, Jorge Taufua returns on the wing. Cade Cust joins the interchange.

Haumole Olakau'atu and Toafofoa Sipley were omitted 24 hours before kick-off. Manly have won 11 of their past 12 games against the Sharks.

Sharks: As was the case last week, with an hour until game time it was announced that Braden Hamlin-Uele will start the match with Andrew Fifita to come off the interchange bench. Scott Sorensen ad Connor Tracey were the last two players dropped from the squad. The Sharks’ winning record against the Sea Eagles (26%) is their worst against any opposition. William Kennedy and Jackson Ferris were omitted 24 hours before kick-off.

Sione Katoa v Jorge Taufua. If not for Katoa's brilliant hat-trick against the Bulldogs, Cronulla would be almost at the foot of the ladder instead of just outside the top eight. The acrobatic winger is pitted against the powerful Taufua in what should be a great battle. 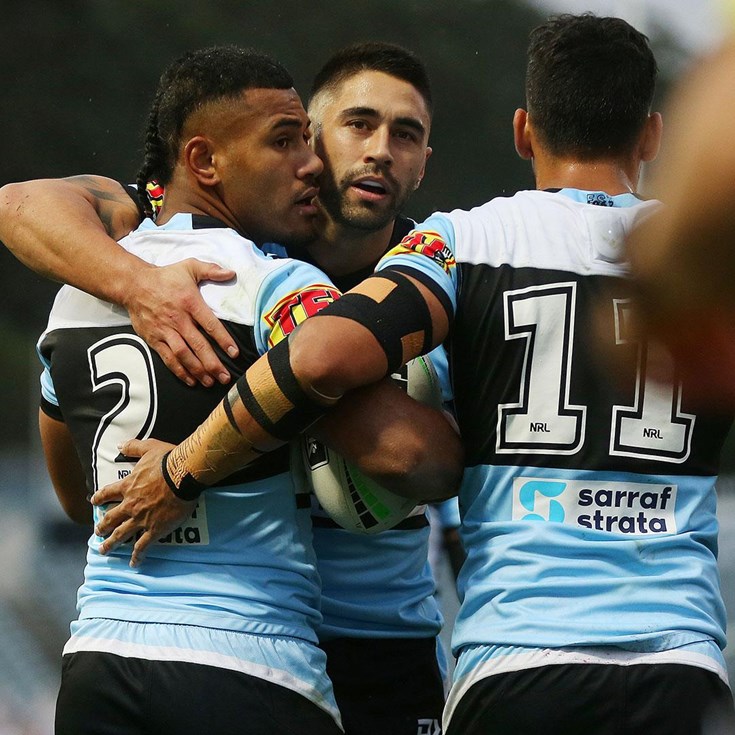