And still, with only 15 men - one of those being Isaac Liu who played on with a broken rib - and some $2 million of playing stock sidelined, the Roosters had enough tricks up their sleeve to slay the Dragons.

With Radley and Verrills going down untouched on a wearing Bankwest Stadium surface, turf will dominate Saturday's headlines.

But a 26-12 triumph for the premiers remains a worthy water cooler topic considering the highlights put on show.

No wonder Trent Robinson, even admitting it was against his better judgement, was willing to wax lyrical about his team's efforts.

"It was really incredible some of the performances out there," Robinson said.

"I'm really proud of them. I thought they adapted really well and played really tough.

"You don't have to coach these guys a lot. There's not a lot of messages out there. You listen to [Luke] Keary or Boyd [Cordner] talk, they're the ones that are really coaching them on the field.

"That's why I really like the way they adapt... I've said it before, I really like walking in and coaching these guys. Every single day. Because they're just outstanding.''

Before the injury carnage, Robinson shuffled his deck like a Vegas blackjack dealer to account for losing his fullback and the world's best player, replacing him with a pretty handy one in Joseph Manu.

Brett Morris, substituting in at left centre for brother Josh (calf) took just four minutes to cash in, powering over all too easily from an early left-side shift.

And when Radley went down screaming in agony, Robinson and his coaching staff "felt sad for 30 seconds, because that's a young guy that's copped a big injury".

Manu produced a welcome distraction soon enough, and a show to put Cirque Du Soleil out of work.

Putting a bomb up himself like he was back in the backyard in Tokoroa, Manu chased his kick through and regathered over the top of Matt Dufty.

In the same motion, Manu swung a no-look flick pass straight into the hands of Jared Waerea-Hargreaves before his own feet hit the ground, laying on what will surely be the most stunning try of the 12 he has scored in 224 NRL outings.

Shortly afterward, Verrills collapsed as he approached the defensive line, his night, and potentially his season over if an ACL rupture is confirmed.

Trailing 10-0 but with the opposition dropping at every turn, the Dragons began to fire.

Ageless Morris leaps his way to a hat-trick

It was Matt Dufty with a bit of magic himself to get them on the board, bulleting a cut-out pass onto Mikaela Ravalawa's chest for St George Illawarra's first points.

And it was Dufty again pulling the money play three minutes later.

His pinpoint pass for Zac Lomax continued a rich vein of playmaking form for the pintsized No.1, and gave the Dragons a 10-10 roll into halftime.

When the show resumed, Luke Keary simply stole it.

With the poise of a three-time premiership winner, the 28-year-old made magic out of nothing, swooping on a hot-potato Roosters attacking play in the 50th minute.

Having already run 15 metres to get into a play he had already featured in, Keary promptly laid on a millimetre-perfect grubber for Morris to score again.

When he next went to the line Keary did it all himself, beating Cam McInnes all ends up from 10 metres out for what proved to be the matchwinner.

By the 75th minute a finale wasn't needed, an incredibly tough two competition points already in the bag.

But having gutsed it out the Roosters kept entertaining to the end, with Keary kicking across field for Morris's third try of the night. Magic to the very end. 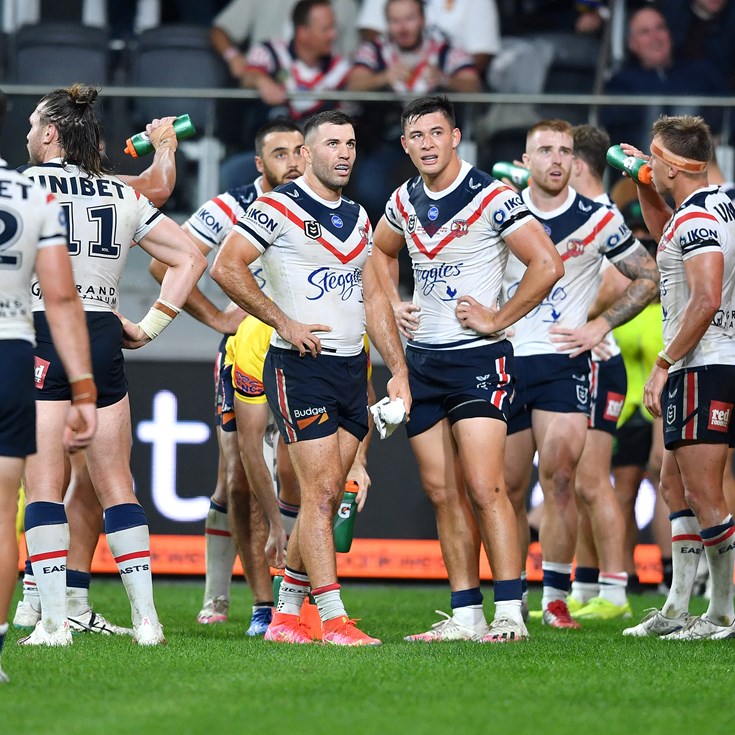 Twinning attitude: How Morris brothers inspire JWH to soldier on