The Raiders produced a stirring comeback to force golden point against the Eels but Ricky Stuart wasn't overly impressed with what he witnessed from last year's runners-up.

In contrast, Paul McGregor must have taken plenty of positives out of his side's performance against the Roosters, even though the Dragons came up empty.

For many years the Dragons found it impossible to win in Canberra and they are sure to face a hostile reception this weekend from a small but vocal crowd returning to GIO Stadium for the first time since round one.

A broken nose suffered in the rugged clash against the Eels won't slow down impressive Raiders half George Wiliams and his showdown with the Dragons' mature age rookie Adam Clune will be one of many intriguing clashes in Canberra.

Raiders: Ricky Stuart has made late changes, promoting Emre Guler and Ryan Sutton to the starting lineup. Josh Papalii and Joseph Tapine will come off the bench. Bailey Simonsson moves from the interchange to replace Jordan Rapana on the wing and Michael Oldfield replaces Curtis Scott at centre, with Scott dropping to the bench. Halfback George Williams broke his nose last week but will be fine to play. Tom Starling and Matt Frawley were the last players pruned from the reserves, while Dunamis Lui and Kai O'Donnell were omitted 24 hours before kick-off. The Raiders have won only two of their past five games at GIO Stadium.

Dragons: No changes for the Dragons, who have won five of their past seven games against the Raiders. Tristan Sailor and Eddie Blacker were trimmed from the squad an hour prior to kick-off, while Billy Brittain and Tim Lafai were omitted on Thursday.

Charnze Nicoll-Klokstad v Matt Dufty. Raiders fullback CNK scored two tries last week to help force the game into over-time and they’ll need his attacking magic again. Dragons No.1 Dufty has been sensational for the last three weeks, unveiling an awesome passing game that has led to him setting up five tries.

Raiders hooker Josh Hodgson has made 299 tackles so far in 2020 – good enough for eighth best in the NRL. Concerningly for the England international, he is credited with a NRL-high 42 missed tackles. 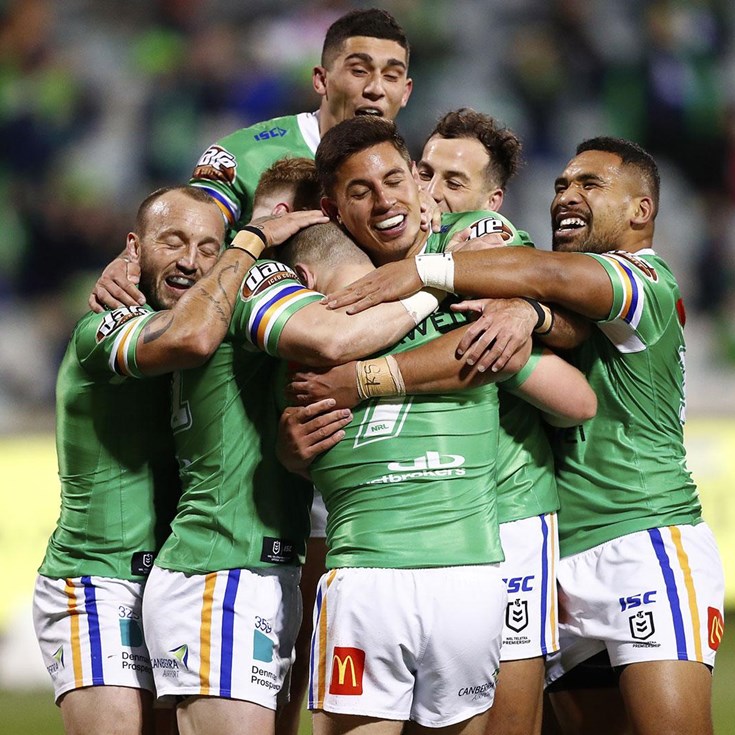