The class of playmaker Shaun Johnson came to the fore to lead the Sharks to a 40-10 win over the Titans on Saturday after fullback Matt Moylan once again succumbed to a hamstring injury.

Moylan, who set up the Sharks' first try, was replaced in the first half with the scores locked at 6-6.

Johnson, who had thrown a wayward pass in the first half for Corey Thompson to race away and score, stepped up in the second half to set up two tries and take his try assists for the season to a perfect dozen.

With the Sharks holding a narrow 12-10 lead at the break it was Johnson who took the game by the scruff of the neck.

It was the club’s third consecutive win and took the Sharks, until Manly hosts Newcastle on Sunday, into eighth position on the ladder.

The Titans were rocked during the week with three injuries to key players with Kevin Proctor (ruptured biceps) and Phil Sami (dislocated shoulder) suffering training mishaps, and Brian Kelly (quad strain) not recovering from an injury he sustained in the 30-12 win over the Broncos.

Coach Justin Holbrook was forced to ring the changes with Tyrone Roberts returning from an ankle injury at fullback and Corey Thompson switching to the wing.

Beau Fermor made his NRL debut in the second row with Erin Clark coming on to the bench and Bryce Cartwright moving into the centres.

Braden Hamlin-Uele opened the scoring for the Sharks with a perfect piece of hole running from a slick Moylan pass.

The Sharks then fluffed their lines when try-scoring chances were on offer and Thompson made them pay when he swooped on a loose Johnson pass and raced 90 metres to score a runaway try to level at 6-6.

Moylan grabbed at a hamstring while chasing Thompson and limped off minutes later. Titans rake Mitch Rein then hobbled off with a left knee injury to add to the mounting Titans casualty ward.

Andrew Fifita made a real mark when he came on in the 28th minute. Wade Graham took the ball to the line and with an inside pass found his 2016 premiership-winning teammate on the rampage. It was Fifita at his best as he left four Titans defenders in his wake.

The Titans refused to buckle and Fermor, who appears to be a player of real promise, soon raced 50 metres off a Taylor pass. Roberts looped around Taylor and try-scoring machine Anthony Don did the rest to reduce the Sharks' half-time lead to 12-10.

Fermor was at it again minutes later but failed to see Taylor looming up on his inside for what would have been a try under the sticks if the pass had been thrown.

Johnson made an immediate difference after half-time with his 11th try assist for the season, finding Briton Nikora running an outside-in angle to score under the sticks.

Minutes later Johnson put on a right foot step and found Blayke Brayley on the inside to score another. The forceful and direct running of Fifita and Hamlin-Uele in the lead-up was also telling.

Chad Townsend danced through the Titans defence and the Sharks led 30-12. Royce Hunt barged over for his first NRL try and veteran Bryson Goodwin also crossed.

The Titans lost Tanah Boyd to a shoulder injury in the second half to complete a week from hell on the injury front.

The Sharks were well served by their big men with lock Jack Williams enormous early before Fifita continued the momentum. Aaron Woods, Hamlin-Uele and Toby Rudolf are starting to warm to their task in the middle with the wide-running Nikora adding another genuine threat.

Moylan, who has had multiple hamstring injuries, is a real concern for the Sharks.

"I’m not exactly sure what has happened. Clearly it is a hamstring but how bad it is we won’t know until we get back and have some scans," coach John Morris said.

"Obviously when he was chasing back on that break he felt something pull and couldn’t continue the game so it is not a good sign.

"It is a concern for Moyza. He has had a couple of soft tissue injuries and until we know more we can’t give any clear update but you’d think it would be a couple of weeks."

The Sharks weren’t at their best in the first half, despite leading 12-10,  but Morris was delighted with the way they responded in the second stanza.

"It was 28-nil in the second-half and I was really happy with the way they closed out that win after in our last two games we let sides back into it and gave away a few cheap points,” he said.

"We certainly went through them. Five of our seven tries were scored by forwards."

Johnson steps off the right then sets up Brailey 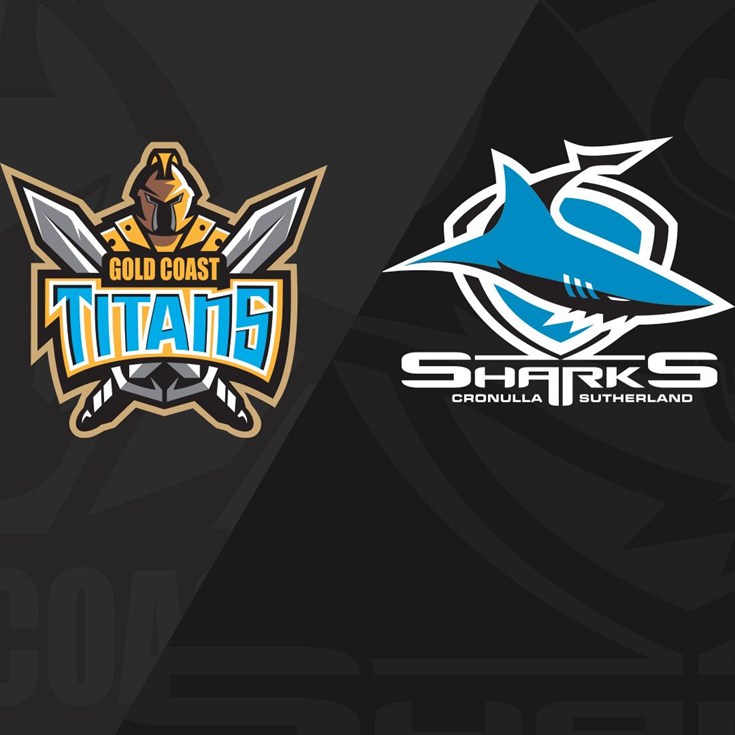 Don pegs one back just before half time for the Titans

Graham turns it inside to Fifita on the last