Another devastating season-ending injury to rising Rabbitohs centre Braidon Burns has taken the gloss off a rugged 26-10 South Sydney win over Canterbury.

Burns suffered a dislocated kneecap when Souths looked to have the hard-fought victory in the bag, continuing a wretched run for the 23-year-old.

Burns has impressed decent judges in his 31 NRL games but those have been strung together across four seasons as hamstring and knee issues, and a badly broken ankle, have kept him stuck on the sidelines.

Coach Wayne Bennett confirmed fears for the worst that surfaced when Burns fell awkwardly on his right knee late in the match and needed the medicab to leave the paddock.

"He's dislocated his knee cap so he'll probably be gone for the season," Bennett said.

"It's the last three or four years I understand, I think he's finished each season with different leg injuries.

"He's a 10/10 bloke who tries his hardest for you, he's great to have around the club. So it is hard but it's the game we play and the risk you take.

"We've all spoken to him. You don't know what to say. You feel his pain and you can't do anything for him, that's what it is but it doesn't make it easy. On him or the coaching staff."

For Souths their first 40 minutes of rust was followed by a far more rugged second stanza, edging them past a dogged Canterbury outfit and back within sniffing distance of the top eight.

The Bunnies big guns barely fired a shot for the first half at Bankwest Stadium on Sunday night, before Cody Walker and Adam Reynolds rallied the cavalry for a 16-point win.

Reynolds simply couldn't kick one straight as 56 per cent of first half possession only amounted to an 8-6 Rabbitohs advantage.

But after the break the pint-sized half laid on one try from the boot and would've had another but for a wicked bounce bamboozling James Roberts.

Instead it was Walker going to the line with intent for the first time in the 58th minute, he and Cameron Murray trading roles for Walker to power over from a short ball.

That made for a 10-point ball game, not that the Bulldogs were to be daunted.

As they often do, they hung tough and hung in, twice trimming the Rabbitohs lead to within striking distance, but lacking the strike to go further.

As a result their efforts amounted to a fourth-straight loss, the last thing besieged coach Dean Pay needs with a verdict on his future still unknown.

South Sydney move back into the winners' circle and ninth position, behind Cronulla and Wests Tigers by the smallest of points differential margins. They made it look a formality early on.

That wasn't the case throughout, but Alex Johnston's third-minute try loomed ominous – the Souths speedster putting his best asset on show after being told there is no room for him at Redfern in 2021.

It was Latrell Mitchell sending him on his way with a catch and pass on the red and green side of halfway, Johnston duly leaving Dallin Watene-Zelezniak for dead as he went in, away and 60 metres for the first try.

The Rabbitohs' left edge continued to gather steam and Damien Cook joined them as he went close to sneaking over, Souths settling instead for a 25th minute penalty goal and an 8-0 lead.

Errors undid the cardinal and myrtle while Canterbury's halves Brandon Wakeham and Kieran Foran began to run with relish.

The latter copped a dislocated finger late in the half for his troubles. The former put the Dogs at ease with a clever 35th-minute chip kick for Canterbury's first points, straight into the in-goal and the arms of Marcelo Montoya.

Reynolds with the ball on a string

Upon the resumption Reynolds found his range straight away, grubbering for Jaydn Su'A's first try in Rabbitohs colours.

Raymond Faitala-Mariner gave the Bulldogs hope when he crashed over in the 54th minute.

But Walker gave Souths breathing room soon enough, while Gagai got his try in the end, snaffling an intercept as the Bulldogs pressed with one last attacking raid and running 95 metres. 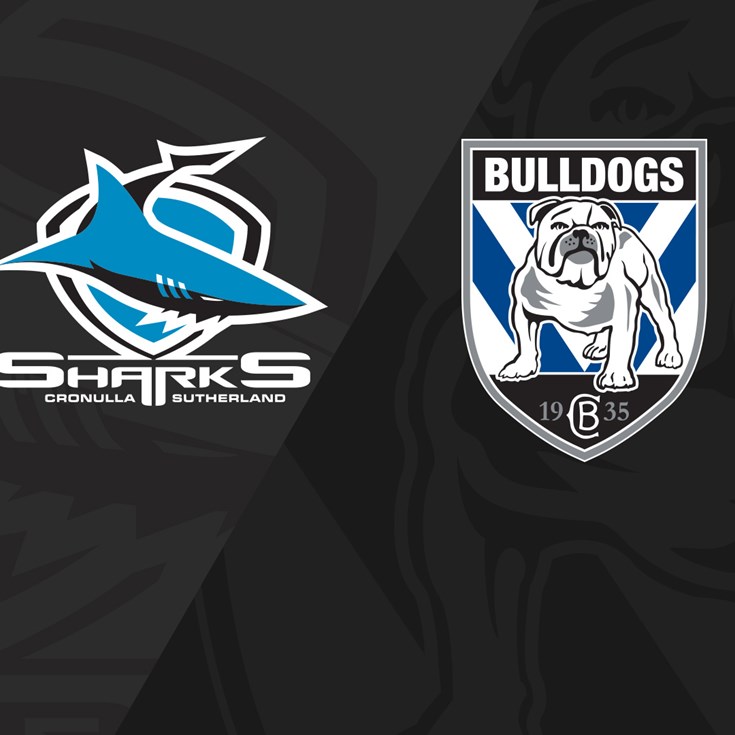