Having been on the road since round one, Newcastle prop David Klemmer "can't wait" to make the 10-minute trip to McDonald Jones Stadium to play before a home crowd.

Klemmer enjoyed the chance to bond with his teammates on long bus rides down the M1 and a game-day flight to Townsville, but he is keen to perform for the Knights faithful in Sunday's clash with the Eels.

"It's good for my kids. I'm not leaving early and I get to see them. It's great for us to play in front of our fans this week," he said.

The NSW Origin front-rower said the challenge of facing table-topping Parramatta "is why you play rugby league".

Despite feeling the after-effects of their brutal win over Manly on Sunday, Klemmer is confident Newcastle's physio and high performance staff will get the team physically primed to take down the Eels.

The Knights had just one fit man on the bench at a stage in the second half. Winger Edrick Lee (broken arm) and back-rower Sione Mata'utia (head knock) are now sidelined, but star fullback Kalyn Ponga will play provided he passes concussion protocols.

"I thought it was obviously gutsy for us and something that we need to keep improving on. We can't just hang our hat on that," Klemmer said of the dramatic victory.

"We've got to keep improving and today [Wednesday] was a good day at training to get ready for this week.

"It's hard during the time but we trained the whole pre-season like that. It was a tough, gruelling one.

"Adsy [coach Adam O'Brien] put us through situations like that in training. It's difficult but we were able to get through it, there's always light at the end of the tunnel."

Klemmer wasn't shy in praising Parramatta for being the benchmark of the competition so far when it comes to attacking play.

"They're a quality footy side, you can see in the games since we've come back from this break," he said.

"They're a high side, fast pace, they're playing 1-17 - the people on the bench are playing really good footy."

But he believes there's a simple way for the Knights to ensure they compete - holding the ball.

They did that exceptionally well against the Sea Eagles, completing 88% of their sets.

"So every week's a new challenge for us to get to where we want to be at the end the year."

The battle of the big men will be one to savour - headlined by Klemmer and the rapidly improving Saifiti twins against Junior Paulo, Reagan Campbell-Gillard and Nathan Brown. 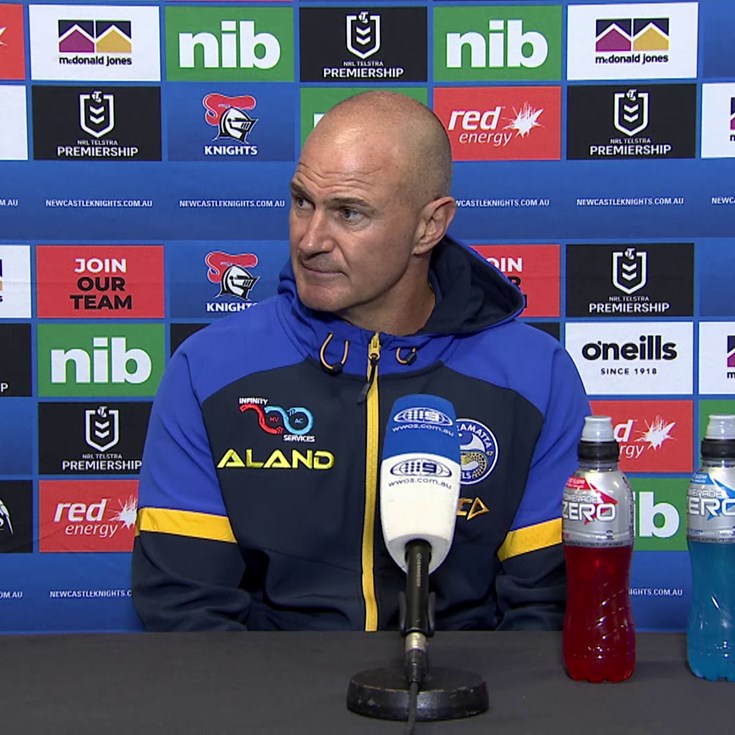 Knights to face their biggest test of the season against Eels