Both these teams will be burning to bounce back after last-start defeats, the Warriors blowing an early lead against the Titans and the Sharks run off the park by Penrith.

Cronulla's loss came after three straight wins, over bottom-eight sides the Bulldogs and Titans and an injury-hit Manly outfit. This is another game they'll be expected to win but the Warriors have been gutsy this year despite seemingly everything going wrong for them off the field.

The New Zealand outfit has won two of its past five matches, and looked red hot early on against the Gold Coast with skipper Roger Tuivasa-Sheck scoring his first try of the year in probably his best attacking performance of the season. They'll be backing themselves to go one better against a beatable Sharks team.

Warriors: Warriors coach Todd Payten has reshuffled his forward pack an hour before kick-off. Jack Hetherington (No.15) will start at lock with Karl Lawton moving into the second row and Eliesa Katoa dropping back to the bench. Five-eighth Kodi Nikorima returns from a head knock in place of Chanel Harris-Tavita.

Lachlan Burr and Adam Pompey dropped off the reserves list on Saturday. The Warriors have won three from three at Central Coast Stadium this season.

Sharks: Bryson Goodwin is out of the Sharks team, with Josh Dugan moving into the centres and William Kennedy (No.20) to start at fullback. In another change to the initial team named on Tuesday, Scott Sorensen will start at lock with Toby Rudolf to come off the bench.

Ronaldo Mulitalo is back from a knee injury. Siosifa Talakai will play despite suffering a head knock last weekend. Billy Magoulias and Nene Macdonald dropped out of the extended squad 24 hours before kick-off.

The Sharks have defeated the Warriors in five of their past six meetings.

Roger Tuivasa-Sheck v Josh Dugan. Tuivasa-Sheck is renowned for his flair and speed but he hasn't been afraid to do the dirty work this season, frequently helping out his injury-hit forward pack with hit-ups early in sets.

This week he comes up against another well-credentialed No.1 with a strong running game, with Dugan the kind of experienced campaigner capable of leading the Sharks out of their middling form this season.

In a badly beaten team, Josh Dugan's performance at fullback provided a rare highlight last weekend. The one-time representative star ran for a team-high 151m against Penrith, with bench back Nene Macdonald the only other player to reach triple figures. 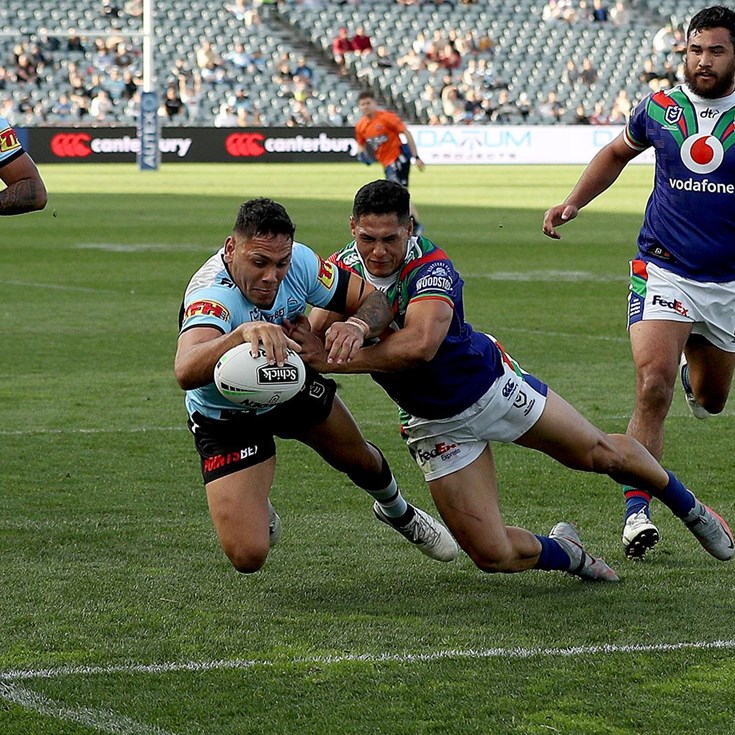