Cronulla remain on track for the finals but another thumping by Penrith has provoked serious doubts about whether they can compete if they get there.

The eighth-placed Sharks are four points clear of Wests Tigers, St George Illawarra, Manly and the Warriors but a couple more losses and the pressure could increase tenfold in the last few rounds.

It was against the Cowboys way back in round four that Cronulla opened their account. North Queensland's season nosedived dramatically from that point but interim coach Josh Hannay has at least got his scrappy side playing with some heart as they tested likely finalists South Sydney and Newcastle over the past fortnight.

Jack Williams and Bryson Goodwin dropped off the extended bench an hour before kick-off after Moylan and Teig Wilton were trimmed from the reserves on Friday.

Cowboys: Murray Taulagi was ruled out on Friday with a knee injury and is replaced by Connelly Lemuelu in the centres.

Valentine Holmes returns from an ankle injury on the wing with Hamiso Tabuai-Fidow and Tom Opacic out. Daejarn Asi returns at five-eighth in place of Ben Hampton.

Francis Molo starts at prop with Josh McGuire moving to lock for the injured Jason Taumalolo (calf) and Tim Gilbert added to the pine.

Peta Hola was cut from the squad 24 hours before kick-off and Shane Wright and Jake Clifford were omitted on game day.

The Cowboys have not won at Netstrata Jubilee Stadium since 2003.

Braydon Trindall v Michael Morgan. Trindall will be keen to show he can cut it in the NRL after an impressive debut last month in the win over Brisbane and then last week's loss to Penrith.

Opposing halfback Morgan was brilliant with two tries against the Rabbitohs in round 14 but he couldn't help the Cowboys score a point against the Knights. He'll be determined to rectify that.

There's no questioning Cronulla's attacking firepower with an average of 24.9 points per game – but they have glaring defensive issues. The Sharks have missed the most tackles (551), though North Queensland aren't without their own frailties, ranking sixth (439). 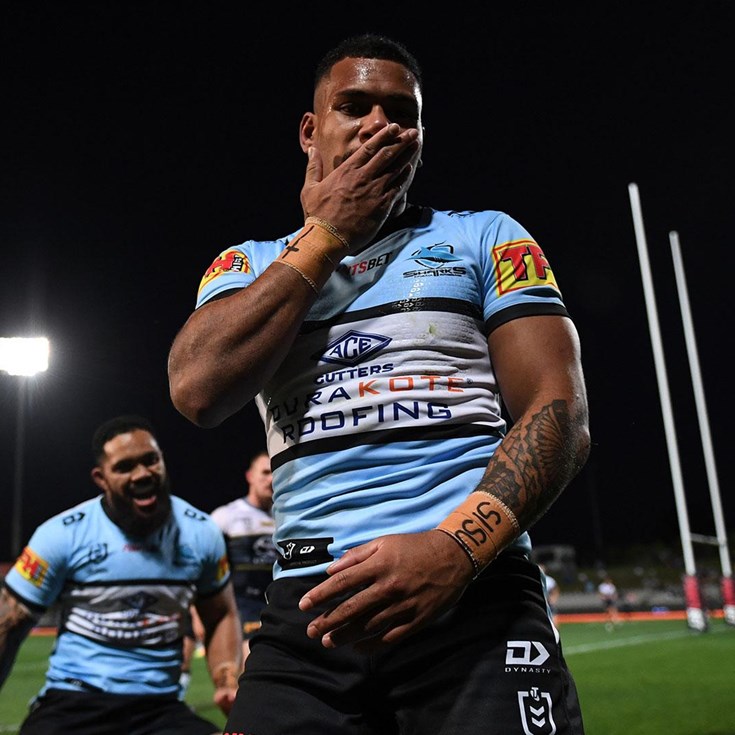 Execution perfection from Kennedy and Katoa

Nikora bursts through on the right edge