The Warriors continued their solid march towards the top eight thanks largely to the devastating Peta Hiku-Adam Pompey right-side partnership in a commanding 36-6 win over the Knights at Tamworth's Scully Park.

Warriors skipper Roger Tuivasa-Sheck also made life unbearable at times for opposing captain Mitchell Pearce as he stepped him twice to score a double.

The Knights left edge of Enari Tuala and Starford To'a will be seeing Hiku and Pompey in their sleep after the crafty centre set up Pompey twice with sublime flick passes. Not even the cover defence of Kalyn Ponga could stop the points from coming.

The Warriors have leapfrogged the Dragons into ninth and will stay there if the Wests Tigers and Sea Eagles lose their round 16 games.

After edging to a two-point lead at the break 8-6 the Warriors trampled all over the Knights, keeping them scoreless as they ran in five tries of their own in the second half.

It is now the fourth win in five games for Todd Payten's men as they surge towards the NRL finals with just four games remaining. It was also the perfect "thank you" note for the locals.

Tamworth's postcode of 2340 has adorned the Warriors' jerseys since their two-week quarantine in the picturesque north-east NSW city in May. Of course the Knights also have a strong connection with the country music capital since they had a week-long pre-season camp there in December.

Hiku flicks it to Pompey

But the Knights were starved of possession for the opening quarter of the game and that came back to haunt them. The Knights could have climbed to fifth on the ladder but will remain in seventh spot.

Pompey's second try came off the back of three repeat sets on the Knights line from forced drop-outs to show how much in control Payten's men were.

Payten had a broad smile of satisfaction on his face afterwards.

"There's a good feeling around the place at the moment – certainly there's some confidence and some belief and that's a pretty lethal combination," he said.

But he was cautious about announcing the Warriors would make the top eight.

"I think we're a good team. Confidence is definitely growing like I said they're enjoying themselves," he said.

"We haven't had that conversation yet [about the finals]. But it's probably going to start. For us it's pretty simple and is about everyone getting their job done and when that happens we get results like that.

"We play Parramatta next week and that will be our biggest test to see where we really are."

The Warriors are still in discussion with the Eels on keeping George Jennings and Daniel Alvaro, when they face their current club.

"It's still to be finalised, but I know the players themselves are keen to play. We're hopeful."

What Payten is already thankful for is how young halfback Chanel Harris-Tavita has stepped into the breach left in the halves through the exit of Blake Green.

The coach caught Harris-Tavita yelling orders at senior player Tohu Harris as he went about controlling the game well by linking the forwards to the backline.

"That's the development we needed from him," Payten said. "It's a tough gig for a young half to tell those senior players where to go and what to do."

Pre-game it had all the hallmarks of arm wrestle with the Knights on a three-match winning streak and the Warriors feeling confident with three victories from their past four games.

But the Warriors didn't follow the script early and dominated from the opening whistle – at the 13th minute mark they had completed seven from eight sets for an 88 per cent possession rate, compared with four from seven sets for the Knights.

A no-look flick pass from Hiku to his winger Pompey follow by a sideline conversion and a penalty to Chanel Harris-Tavita and the Warriors were out to an 8-0 lead.

But on their first foray into the Warriors 20-metre zone – after 19 minutes of play – the Knights scored through centre Gehamat Shibasaki off a Mitchell Pearce bomb. At 8-6 that's when things started to get interesting as the grind began.

The Scully Park ground announcer kept playing the Dave Dobbyn hit "Slice of Heaven" at each break in play as the Warriors started to get the upper hand. However, the score remained unchanged at half-time.

The stats at the break were telling. The Warriors had three players over 100 metres off one less set than the Knights, while the Knights had no-one.

Ten minutes into the second half and Tuivasa-Sheck scored his fourth try of the year – but his third in his past three games – to put the Warriors out to 14-6. Luck was well and truly on the Kiwis' side with Harris-Tavita's conversion hitting the right upright but bouncing in.

And after tries to Pompey, George Jennings, Tuivasa-Sheck's second and Jazz Tevaga the score had ballooned out by six tries to one.

It was an unhappy 150th NRL game for Knights prop David Klemmer. Maybe his 151st next week against the Sharks back home at McDonald Jones Stadium will be better.

Peak Hiku with the magic ball 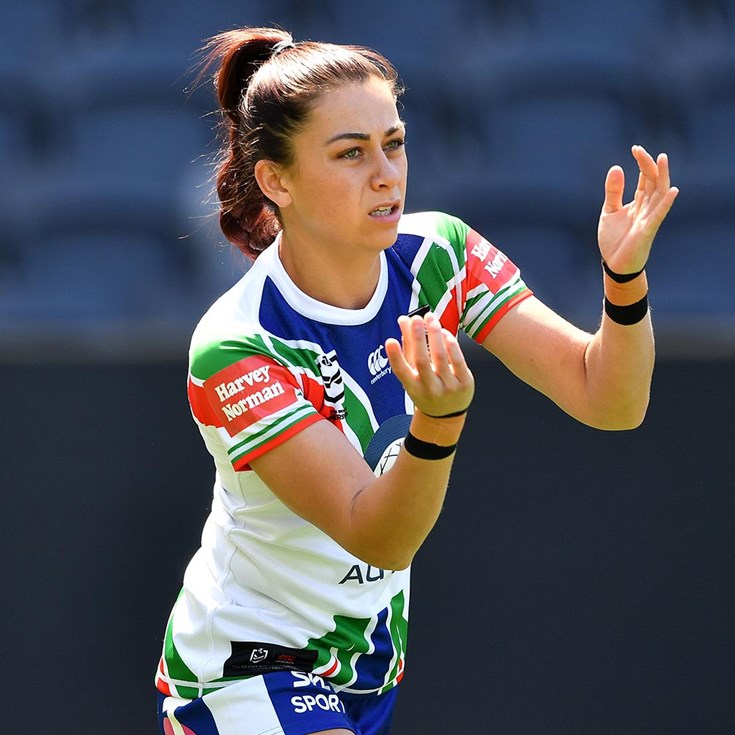 Warriors thump Dragons to end campaign on a high