Williams was the drawcard but it was James Tedesco who lit up GIO Stadium with a match-winning performance to celebrate Josh Morris's 300th game milestone in the NRL.

The timing of SBW's return coincided with the club's push for a top-four finish over the three weeks heading into the finals.

That's all the Roosters superstar declared he'd need after a cameo against the Raiders that showed glimpses of class.

"Since I've got that [game] out of the way and I've blown out the cobwebs, God willing I'll start to find my feet in a couple of weeks," Williams said.

Robinson gives an insight into the 'aura' of SBW

"Experience has shown me it will take me a couple of weeks.

"It was to be expected. I haven't played in six months I'd only had a couple of weeks training.

"The big difference for me is when the bell rings. That has quickened the game [set re-starts], but it's also helped the game evolve a bit into more free-flowing footy."

Predominantly an edge forward during his first two stints in the NRL, Williams was thrown into the middle and could be used there in the future given the Tricolours rich stocks in the back row.

Boyd Corder is a lock on the left edge, while Sitili Tupouniua is turning heads to hold onto the right side spot for now.

Every touch from SBW's return to the NRL

Angus Crichton's successful return from a knee injury saw he and Williams forced to the middle, which could be an indicator of what lies ahead for the seasoned campaigner.

"I got on there and we were straight into an 18-tackle set. It was a nice way to be re-introduced to footy.

"Hopefully I get the nod to have another crack and build on tonight's performance.

"I'm under no illusions coming into this star-studded side, the biggest challenge is making the top 17, and if I do I don't get the choice if it's the middle or an edge.

"It's whatever is best for the team. I'll play my part and if it's in the middle or not so be it.

"As a team, we're moving in the right direction and how we want to base our game, especially off defence."

"Sonny has this aura about him off the field, which is why there's interest in our game," Robinson said.

"So many people are interested in watching the game. It would have been Australia, New Zealand, England and France, all these countries we want to go to with the game.

"But inside the dressing room we feel that as a player and a teammate. He's a great guy. He's a teammate.

The big difference for me is when the bell rings. That has quickened the game

"His thing is there's not a separation between him and the other guys.

"The aura internally and externally is slightly different. But it has a huge effect.

"Everyone knows that external aura. He's willing to work and do his job in the middle of the field."

The Roosters host the sixth-placed Newcastle Knights at the SCG next Saturday. 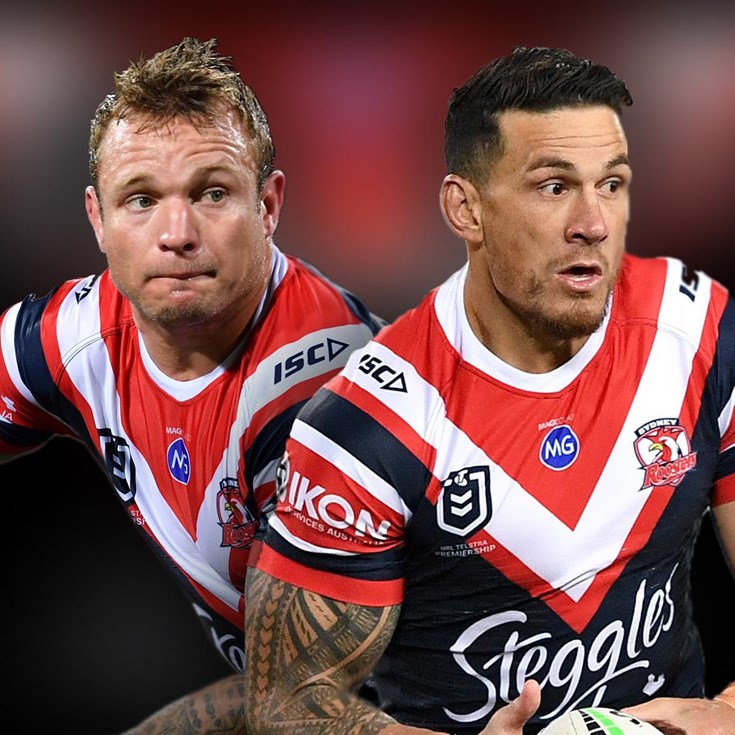 Friend and SBW fit, but how will Sonny be used?

'We just ran out of time': Roosters take confidence from fightback