With their finals hopes finally extinguished St George Illawarra can settle into the role of spoiler and first up in a three-leg gauntlet of finals contenders are Canberra.

The Dragons' failure to take their chances against the Cowboys on Sunday means that now not even the numbers add up so they will be playing for pride and to impress newly named 2021 head coach Anthony Griffin.

But, having briefly flirted with an unlikely late-season run at the top eight, things don't get any easier because after they host fifth-placed Canberra they are away to sixth-placed Newcastle and at home to second-placed Melbourne to round out the season.

The Raiders, who can't afford another stumble after dropping two points behind the fourth-placed Roosters, will want to make it count against the Dragons because they also face a challenging finish to the regular season against the Warriors and Sharks.

Dragons: Tyrell Fuimaono was a late inclusion after Jacob Host was a late scratching due to a calf injury in the warm-up. Cody Ramsey is set to make his NRL debut on the wing in place of Mikaele Ravalawa. Paul Vaughan will return from suspension in an all-new front row pairing with Kaide Ellis. Josh Kerr and Blake Lawrie have moved to the bench.

Eddie Blacker was cut from the reserves list an hour before kick-off after Brayden Wiliame and Max Feagai were omitted on Friday. The Dragons have lost four of their past five games at WIN Stadium.

Raiders: Dunamis Lui starts at prop with Ryan Sutton going back to the bench. Matt Frawley and Matthew Timoko were cut from the squad on game day after Soliola and Sam Williams were omitted from the squad 24 hours out from kick-off. Raiders captain Jarrod Croker requires two goals to become the 10th player to kick 800 NRL goals.

Corey Norman v Jack Wighton: Their 2020 numbers are remarkably similar given that both have solidified remarkably different perceptions - Wighton as the man who measures up in the big moments and Norman as a much less reliable playmaker when the pressure is on.

Canberra's injury woes have captured most of the attention but their struggles in attack could prove decisive when it comes to securing a top-four finish and, from there, how far they progress in the post-season.

Only one other team in the top eight (Parramatta, 336) has scored less than the Raiders' 344 points and most of their serious finals rivals are around 100 points ahead in that category. 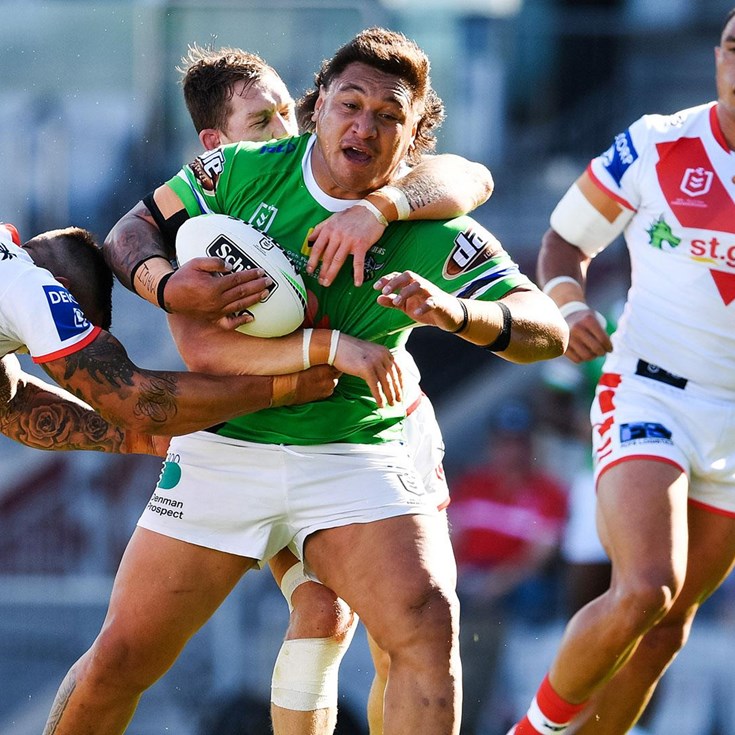