Melbourne's focus is turning from the minor premiership to wrapping up a top-two finish with their hopes of chasing down front-runners Penrith fading.

The Storm's finishing run of the Cowboys, Wests Tigers and Broncos shouldn't present too many difficulties but bridging a three-point gap to first seems unlikely given this week's derby with Parramatta is the one-loss Panthers' final significant regular-season obstacle.

North Queensland's reward for snapping a nine-game losing streak is back-to-back appointments with the top two teams in the competition.

The Cowboys' young playmakers Jake Clifford and Scott Drinkwater combined beautifully with veteran fullback Valentine Holmes to snatch a golden-point win over the Dragons but they face a challenge of a whole other magnitude against the Storm with Camerons Smith and Munster pulling the strings and Ryan Papenhuyzen providing the firepower from the back.

Storm: Tui Kamikamica will return from a back injury on the interchange bench in jersey No.20. He and Tom Eisenhuth were both elevated from the reserves list to the game squad an hour before kick-off. Albery Vete and Isaac Lumelume were the last two players to make way.

With Ryan Papenhuyzen out with an Achilles injury, Nicho Hynes will play fullback. Winger Suliasi Vunivalu returns from a broken jaw. Nelson Asofa-Solomona is back from a calf injury to fill the hole left by Christian Welch's suspension.

Ryley Jacks is the new face on the bench with Chris Lewis omitted. Sandor Earl and Max King dropped off the extended bench 24 hours before kick-off. The Storm have won their past 10 games against the Cowboys.

Cowboys: As was the case last week, Tom Gilbert will start the match, with Gavin Cooper dropping back to the bench. After Shane Wright and Ben Hampton were omitted from the reserves on Saturday, Jake Granville and Peter Hola were omitted an hour before kick-off.

The Cowboys have lost eight from nine against top-eight opposition in 2020.

Cameron Munster v Scott Drinkwater: The Cowboys pivot will have to cut down his mistakes when he goes toe-to-toe with arguably the competition's best five-eighth. Drinkwater leads the NRL with 26 handling errors while Munster isn't even in the top 50. He also has 44 missed tackles and while he only just edges the Storm star (41) in that category his tackle efficiency of 74.5 per cent lags badly behind Munster's (86 per cent). So a clean game is imperative if he's to lead North Queensland to an upset victory.

Melbourne are winners of 10 in a row against North Queensland, not having lost to the Cowboys since finishing on the wrong end of a 32-12 scoreline in their 2015 preliminary final. The Storm trailed 16-12 at halftime but failed to trouble the scorers in the second half as the visitors pulled away en route to their maiden premiership. Cooper Cronk and Tohu Harris scored Melbourne's tries and Cam Smith kicked two from two while Gavin Cooper, Michael Morgan and Justin O'Neill registered doubles for the Cowboys and Johnathan Thurston kicked four from six. 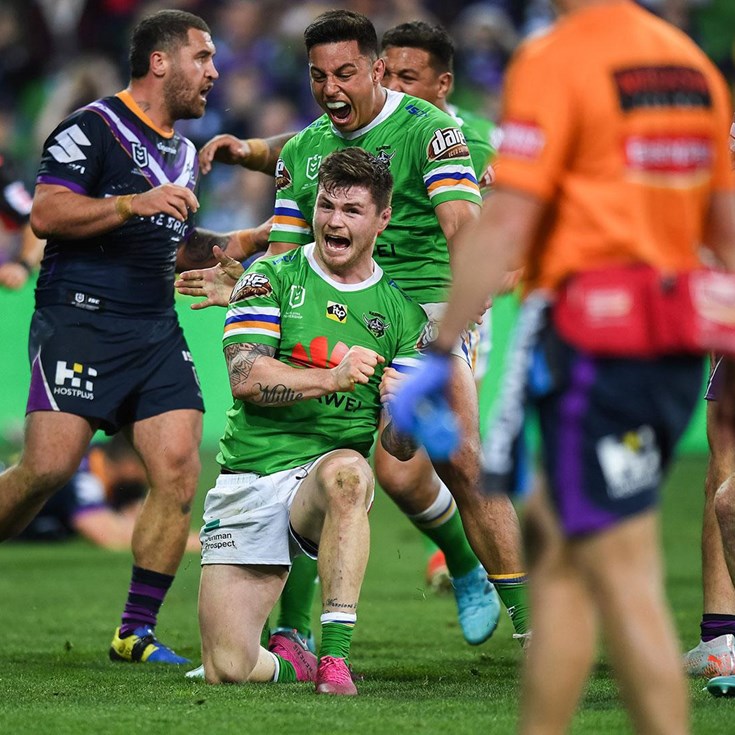 Bateman steals the win for Canberra