Morgan Harper earned high praise after carving up his old team in Manly's 32-20 win over the Bulldogs but the excitement was offset by more injuries.

Five-eighth Cade Cust (high ankle sprain) is expected to miss the final two rounds while prop Addin Fonua-Blake (PCL aggravation) will race the clock to play next week after the pair were forced off late.

The Sea Eagles trailed 10-0 after half an hour at ANZ Stadium on Friday but piled on four tries in 13 minutes either side of the break to claim the ascendancy and snap a six-game losing streak.

Centre Harper, who marked his Manly debut in last week's loss to Wests Tigers with two tries, scored a solo stunner and made 214 metres against the club he left in July.

"It's been exciting to watch someone [Harper] come in and take that opportunity with both hands," skipper Daly Cherry-Evans said.

"He's played great footy for two weeks and he's put his hand up not just for the next two weeks but for next year."

Coach Des Hasler said the 22-year-old "has got a bright future".

Halfback Daly Cherry-Evans was the architect of the revival, playing expansively to set up three tries and two line-breaks.

Harper carves up the Bulldogs

"It's hard to evaluate your own game after losses and the last six weeks has been really hard to find something to be happy about on an individual level," Cherry-Evans said.

"But there's just something about winning footy games that you just find it a bit easier to dive into your stats and see what you did good.

"It was great on a team level to score the points we scored and to hold them out at different stages was really pleasing."

Bulldogs winger Jayden Okunbor played his first match of the season after having his contract reinstated and claimed a late try.

Last-placed Canterbury, who have now slumped to seven straight losses for the first time since 2008, are running out of chances to avoid the wooden spoon and will rue blowing another strong start.

Jake Averillo, playing five-eighth in the absence of the injured Kieran Foran, provided the opening try to second-rower Matt Doorey after six minutes.

Lewis pinches it from Cherry-Evans

Winger Nick Meaney converted and soon added a penalty goal. The Sea Eagles responded on the back of some Cherry-Evans skill.

The Australian Test No.7 zipped across field and back to the middle where he linked with agile behemoth Taniela Paseka, who stepped past Chris Smith to cross under the posts.

Will Hopoate looked a moral to grab a try against his former club, but the charging veteran was denied by a fantastic Harper tackle.

Cherry-Evans took an offload near halfway and slung the ball wide to Albert Hopoate, then backed up to take the ball again, find space and place a grubber that was swooped upon by Curtis Sironen.

The Sea Eagles snatched the lead on the stroke of half-time when centre Brad Parker broke through on the left edge after a Cust pass.

The carve-up continued in the second half as Cherry-Evans threw a flat short ball to hole-running back-rower Jack Gosiewski.

Paseka with the fancy feet

But Manly's Funa sliced clear on a kick return and a few plays later Harper pulled away from a couple of defenders and zoomed 45 metres to the line.

The Bulldogs continued to create chances but shoddy execution cruelled them before Manly prop Martin Taupau joined the extremely rare club of front-rowers who have scored from their own grubber.

Hasler celebrated his 250th match in charge of the Sea Eagles, describing it as "a great honour" and a "privilege to be involved in the NRL".

The veteran mentor said star fullback Tom Trbojevic (hamstring) and winger Reuben Garrick (shoulder) are strong chances of returning against the Titans next Saturday while five-eighth Dylan Walker (foot) will be "monitored". 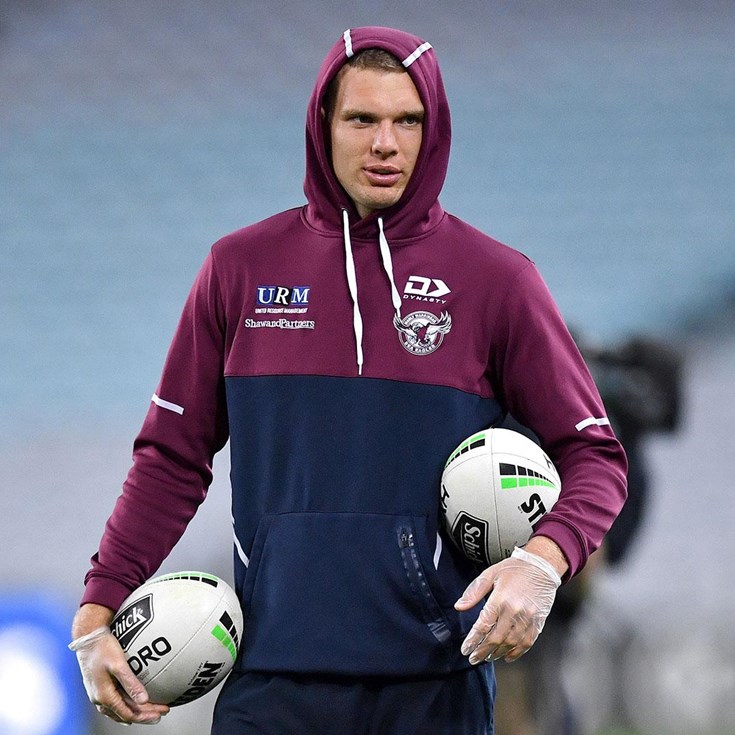 Paseka with the fancy feet