With the finals well out of reach and only two games remaining, the main goal for the Cowboys is simply to finish the season on the highest possible note.

The club has appointed a new coach for 2021 in Todd Payten and some players should already be thinking about taking every positive step they can to cement a first grade spot for next season.

Penrith avenged their round five loss to Parramatta (their only defeat of the season) with last week's 20-2 home win over the Eels.

They have answered every challenge in 2020 and head into Friday night's clash at Townsville needing one more win to clinch the minor premiership.

Cowboys: North Queensland have made one late change with Tom Gilbert being promoted to start in the second row and veteran Gavin Cooper sliding back to the bench. Jake Granville and Ben Hampton were the final omissions from the match-day 17.

Jason Taumalolo (calf) makes his return to action after training well on Wednesday and being added to the 17-man squad on Thursday. His inclusion hasn't come at the expense of debutant Ben Condon, who will start on the bench. Daejarn Asi also came into the team 24 hours before kick-off in place of Esan Marsters in the centres.

Murray Taulagi has replaced Justin O'Neill at centre while Corey Jensen is set to start at prop with Francis Molo moving to lock for the suspended Josh McGuire.

John Asiata is also suspended with Emre Pere and debutant Ben Condon called up on the bench. Peter Hola and Marsters were the two men to drop out on Thursday.

The Cowboys have lost all four games against top-four opponents in 2020.

Panthers: Penrith are 1-17 after Billy Burns and Matt Burton were the final cuts from the match-day squad. Mitch Kenny has replaced hooker Api Koroisau, who is being rested after his head knock last week. Props James Tamou and Zane Tetevano have also been afforded a break. Moses Leota will start in the front row while Kurt Capewell and Jack Hetherington, in his first game back from a Warriors loan deal, have joined the bench.

Dean Whare and Charlie Staines were cut from the reserves 24 hours before kick-off.

The Panthers have won only one of their past seven games in Townsville.

Scott Drinkwater v Jerome Luai. If the Cowboys hadn't been cursed by injuries to so many key players there's a good chance they'd be in top eight reckoning. Drinkwater's performances have been one of the few silver linings and the former Storm fullback has shown he isn't afraid to take charge in crunch time.

Luai continues to improve every week and his chemistry with halves partner Nathan Cleary is one of the main reasons why the Panthers are on top of the ladder.

The Cowboys gave the Panthers a minor scare when they clashed in round 10 at Penrith. The game was tied 4-4 at half-time before the Cowboys took a 10-4 lead two minutes into the second half. The Panthers clicked into gear with tries to Brent Naden, Stephen Crichton and Nathan Cleary to claim a 22-10 win. In their only meeting last year the Cowboys turned a 12-4 half-time lead into a 24-10 triumph over the Panthers. 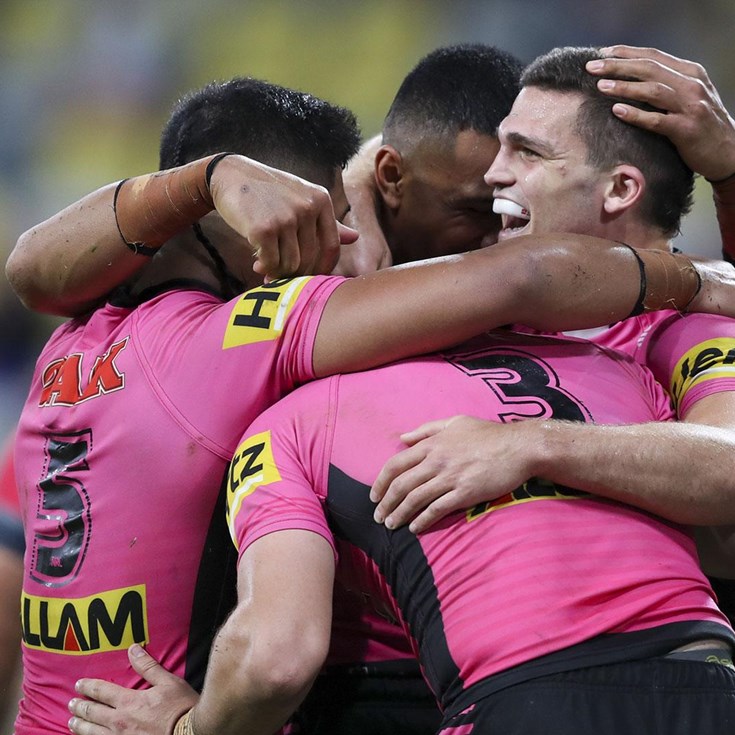