After being embarrassed by Newcastle, prompting interim coach Dean Young to compare their efforts to "under-eights stuff", the Dragons can save face at home against the mighty Storm to end another turbulent season.

Second-placed Melbourne are down a few troops but based on what we've seen in recent weeks, St George Illawarra will need to drastically lift to upset Craig Bellamy's finals-bound side.

The Storm have scored 108 points across their past three games while the Dragons leaked 102, so the hosts will have their hands full.

Dragons: Paul Vaughan (eye) is out, with Kaide Ellis starting at prop and Tyrell Fuimaono joining the bench. Jordan Pereira was the other player omitted from the extended squad on Saturday.

Jayden Sullivan will debut in the halves alongside the returning Adam Clune with Ben Hunt suspended.

Brayden Wiliame and Corey Norman were the two players left out an hour before the match.

Max Feagai has been called onto the wing with Jordan Pereira out and prop Eddie Blacker handed a debut on the bench, while Euan Aitken (hamstring) has returned at centre.

Jacob Host (calf) is back in the second row with Tariq Sims moving to the bench and Tyrell Fuimaono out while Blake Lawrie will start with Kaide Ellis benched. The Dragons have lost four from five at Netstrata Jubilee Stadium this season.

Plenty of players rested at Melbourne with an entirely new backline. Ryan Papenhuyzen (Achilles) will return with Nicho Hynes shifted to the bench. Josh Addo-Carr and Suliasi Vunivalu are rested with Sandor Earl and Issac Lumelume on the wings. Brenko Lee and Justin Olam are out with Ricky Leutele and Paul Momirovski the new centre pairing. Cameron Munster and Jahrome Hughes are rested with Ryley Jacks and Cooper Johns in the halves.

Trent Loiero and Judda Turahui were trimmed from the extended bench 24 hours before kick-off. The Storm have won six of their past eight games against the Dragons.

Cameron McInnes v Brandon Smith. Whether he plays hooker or lock, McInnes is the heart and soul of the Dragons and the proud skipper will be desperate to inspire his troops after last week's hiding. Smith, meanwhile, gets his chance to pull the strings from hooker with chief playmakers Cameron Smith and Cameron Munster on the sidelines.

Despite their consistency, there is only one category in which Melbourne are the league leaders - dummy-half runs (291).

The Dragons rank 10th in that category with 179 and may need their outside backs to step in for more scoots to match the Storm's production. 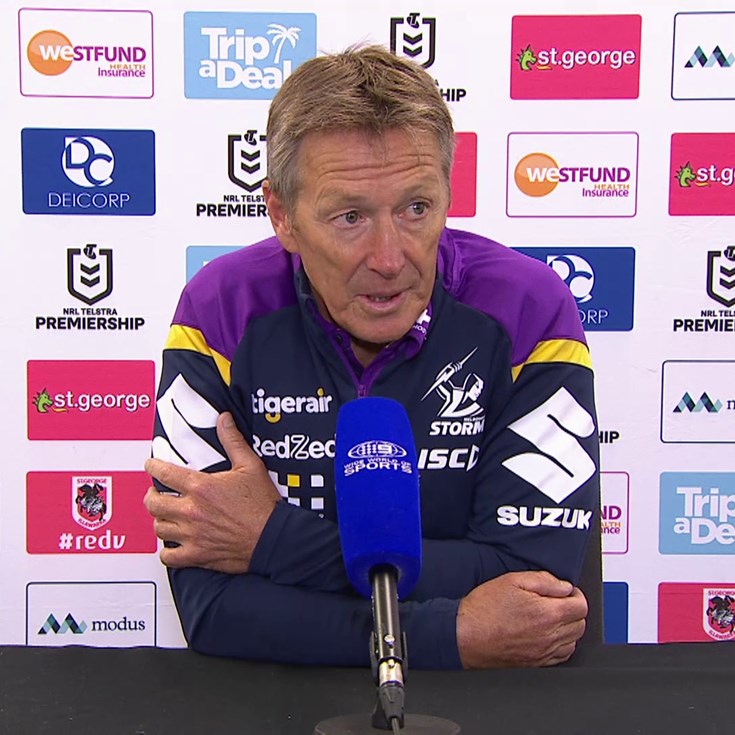 Frizell gets a double and the Dragons secure the win

Frizell crosses in his final game as a Dragon

Earl dives over in the corner