Panthers captain James Tamou was happy to accept Luke Thompson's word that the Englishman didn't intentionally eye gouge him in an imperious 42-0 win over the Bulldogs.

On Sunday, Thompson was referred straight to the judiciary after being charged with eye gouging in the match at ANZ Stadium.

Tamou made a complaint to referee Henry Perenara in the 15th minute and the match review committee have since decided Thompson has a case to answer.

"I was hoping to get the penalty but obviously the play went on. There's not much in it," Tamou told reporters.

"He said after he was just trying to get something to try and get me down, which was fair enough. In the scheme of things, you're trying your best just to do your job and try and win the tackle.

"He said there was nothing in it. I've been keeping my eye on Luke and I don't think he's done anything like that throughout the year. From my point of view, I don't think there was much in it.

"I hope nothing comes of [the Thompson incident] and I hope he sticks around because he's a good player."

Thompson on report for alleged eye-gouge

A vocal contingent of fans stuck around after full-time to watch the Panthers being presented with the shield by NRL CEO Andrew Abdo.

"Today wasn't really about the minor premiership, because that was over last week," coach Ivan Cleary said.

"Today we were just trying to get finals ready. I felt good about what happened today and I'm looking forward to next week.

"We're super hungry. A new competition starts next week with the best teams. But we've put ourselves in a good position. We're very confident with our own game and what we can produce."

There could be a concern for winger Brian To'o, who "jammed his ankle" and left the field with four minutes remaining.

Sentiment was in the air to begin the clash with Canterbury farewelling a raft of players. Stalwart prop Aiden Tolman, unwanted by the club next season, was denied the chance to play a 223rd match in blue and white due to a calf injury in the warm-up.

Kerrod Holland, Sauaso Sue and Jack Cogger made their final Bulldogs appearances as the injured Kieran Foran, who is set to re-join Manly in 2021, watched on.

Capewell pounces on a Luai kick

It was announced this week that long-time referee Gavin Badger wouldn't be retained as an NRL match official and he bowed out on touch judge duties.

Stand-in Penrith fullback Daine Laurie set up the first try for To'o in the sixth minute as the Panthers took control after an early 40/20 kick by Cogger.

Capewell then helped himself to a double from kicks either side of Naden's first try. The score ballooned to 24-0 at half-time despite Canterbury hanging reasonably tough in defence for the opening half an hour.

Luai opens up the Bulldogs to set up Naden

Winger Josh Mansour got the party started in the second term with a 54th-minute try before Naden crossed again off a deflected Nathan Cleary grubber.

Matt Burton powered in after a Luai short ball in the 66th minute and Tamou got his first four-pointer of the year to finish an eight-try rout.

Young Bulldogs outside back Tui Katoa made an assured debut after Okunbor went off in the 25th minute. Faitala-Mariner's afternoon was cut short midway through the second half.

Capewell returns the favour for Naden 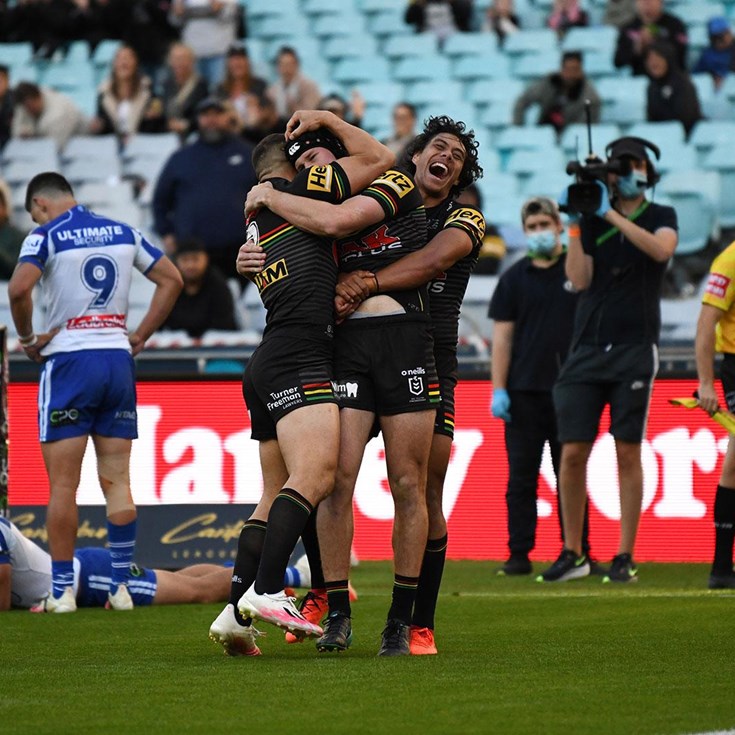