South Sydney will march on to their third grand final qualifier in as many seasons after a stunning 30-point fightback ended Parramatta's horror week with more finals heartbreak.

By all rights, not least their pre-game lead-in, the Eels were dead in the water.

A simply electrifying first-half flurry by Clint Gutherson and co proved otherwise, with three tries in five minutes as "The King" reigned supreme making for a shock 18-8 Eels lead.

The Bankwest crowd was duly in raptures, only for Damien Cook to answer in kind and run riot himself.

Cook had a hand in three tries as the Rabbitohs rattled up 30 points in 40 minutes after the break, ruthlessly exploiting critical errors from first Mitch Moses and then Gutherson himself.

With South Sydney storming back to a 20-18 lead after halftime, Moses lined up a penalty goal from point blank range with 19 minutes to go.

Instead of levelling proceedings, Moses' shot cruelly struck the upright, ricocheting straight to Jaxson Paulo for a 60-metre run downfield.

By the set's end Gutherson, until this point a moral for man-of-the-match honours, was fumbling a Cook grubber straight to Bailey Sironen.

Parramatta's week started with first Maika Sivo being lost to injury, then Blake Ferguson being scratched as well.

For Michael Jennings to be rubbed out 12 hours before kick-off by a failed drug test, and then the Eels to fight back in spectacular fashion, said plenty about the resolve in Brad Arthur's maturing squad.

The Rabbitohs' own rise spoke just as much about their form with ball in hand, which has delivered 35 points a game for the past 10 weeks.

A showdown with minor premiers Penrith next Saturday night is their reward, Wayne Bennett once more delivering them to within 80 minutes of another grand final.

Having been in this same spot twice before in the past two seasons, Bennett revealed a tapered approach for his Rabbitohs side in what has been topsiest of turvy seasons.

"The good thing is [this team] don't want to be beaten, they just keep turning up," Bennett said.

"When we had the break for COVID, some teams trained really hard and flogged their players, but we weren't in that category. I wanted them playing well this time of year.

"We played well at the beginning of last year and then lost our mojo. Parramatta are pretty much in the same boat to what happened to us last year. You can't do it [all year].

Crafty Cook turns it inside to Knight

"I think they've played to about 70 per cent of their ability tonight. We need to find a bit more, we've got an opportunity to do that, and I'm confident we can.''

For the first 20 minutes, progress to another preliminary final looked a formality as Souths made all the running and led 8-0

Junior Paulo changed that in an instant as Parramatta pushed one, then two, then three picture-perfect offloads.

The first had Phil Gould dubbing Junior Paulo's effort Arthur Beetson-esque in commentary, the 123-kilo big man laying on Gutherson's first try with defenders hanging from his every limb.

George Jennings scores as Gutherson gets into open space

Within two minutes Lane produced a fair imitation for Gutherson to streak into the backfield.

"The King" trumped both with his effort on the fly, matched by George Jennings as he collected it around his ankles and crossed for the Eels to lead.

When Gutherson dummied and darted over for his second, Parramatta suddenly held a 10-point advantage and the 14,510-strong crowd in raptures.

But with halftime the Bunnies took a breath, and then Cook took charge.

Reynolds provides the spark, Murray gets the points

Springing to life as the game opened up, Cook did the same to Parramatta's marker defence with a simple ball for Liam Knight to go over.

Adam Reynolds then produced a pretty offload of his own to bust the Eels' left edge, Cameron Murray looming in support for South Sydney to hit the front.

Showing the finals nous still lacking from the Eels, Souths went for the throat and found fortune in the errors from Moses and Gutherson.

Long-range tries to Jaxson Paulo and Cook made sure of the result, a late salvo from Jennings just not enough to save Parramatta from more post-season pain.

Cook try locks in a date with the Panthers 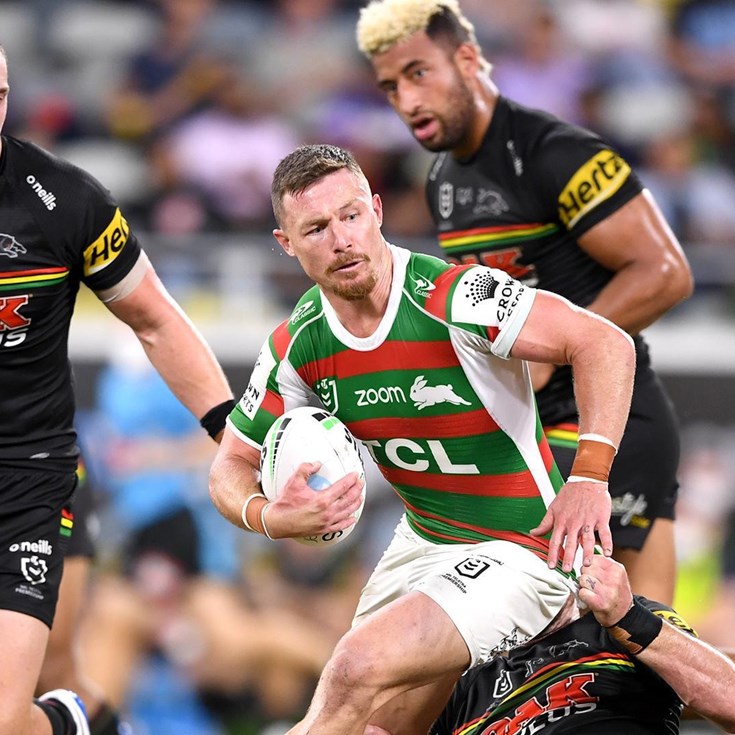 Movement the key to the South Sydney attack