Warriors coach Brad Donald praised his team's "astonishing" progress as they finished their NRLW campaign in style with a 22-10 victory win over a depleted St George Illawarra outfit at ANZ Stadium on Saturday.

He also singled out the team's rugby sevens stars for their special brand of entertainment.

Outstanding performances from Warriors trio Evania Pelite, Ellia Green and Karina Brown proved the difference at the Olympic Park venue as both sides searched for a first-up win to finish the season.

The Warriors squad came together just over a month ago in unusual circumstances with just five incumbent players making the trip to Australia.

Donald said the final round win was "great reward" for everyone who contributed to ensuring the club was represented in the NRLW this season.

"For us to see what we were able to create in four weeks is astonishing," Donald said.

"Everyone has had a role in that from the players to support staff, to New Zealand rugby league, the Warriors and NRL.

"It's a great tribute to those girls who were left at home."

Dibb gets in on the freakish offload act

Green and Pelite bid farewell to their stints in rugby league with the pair proving dominant on the left edge with a try each and combined 305 metres, five line breaks and 16 tackle busts.

Pelite's battle with Jessica Sergis was a highlight in the game with the rugby sevens convert getting one over the reigning Dally M medallist with a lethal fend that sent Sergis flying.

Another huge hit from Green on Sergis added to the edge dual but the Dragons centre wouldn't shy away with some strong defensive efforts of her own in return.

"Those [rugby Sevens] girls have showed us what the standard of professionalism in a contact sport can look like," Donald said.

"They're incredible humans off the field and their work ethic and attitude has been second to none.

"Things like this creates relationships, not just with the players but with the network. We'll correspond and learn some stuff from this and cross-pollinate between the two sports.

"The great thing about the movement is there's a spirit across all sports. We talk about the NRLW being the same game, but our way, and it certainly is.

"There's a great spirit of collaboration between sports and I think for us to take the next step from amateur to semi-professional and professional we need to learn from other codes."

The Dragons were forced to play with 16 players ahead of the clash due to an injury toll that saw NSW representatives Maddie Studdon (ankle) and Tiana Penitani (knee) ruled out before kick-off.

Dragons coach Daniel Lacey turned to debutant Jade Etherden in the halves and the first 15 minutes looked encouraging before the side fell away.

Another Dragons debutant, Teagan Berry, was denied the opening try through a last-minute saving from Madison Bartlett forced her into touch.

Dragons captain Sam Bremner went down Berry's edge again three minutes later and the 18-year-old took her second chance to plant the ball over in the corner.

However, an error from Maddison Weatherall in her first appearance of the season proved a coach-killer after points with the Warriors scoring from the following play through Pelite's heroics on Sergis that helped send Green over.

The Warriors were in again shortly after when Shontelle Stowers found Madison Bartlett on the right edge with a crafty offload.

A double to Shaniah Power in the second half ensured victory for the travelling Warriors, who came together pre-game for a cultural haka to acknowledge their campaign.

"These girls have just shown up for each other. We've been underdogs the whole way through, to do what they've been able to do off the field and enjoy each other's company," Donald said.

"I can honestly say I've never been in a group that's had one issue."

In a further concern for the Dragons, Keeley Davis left the field late in the match with a back injury as the side narrowed the lead late with a burrowing try to Aaliyah Fasavalu-Fa'amausili. 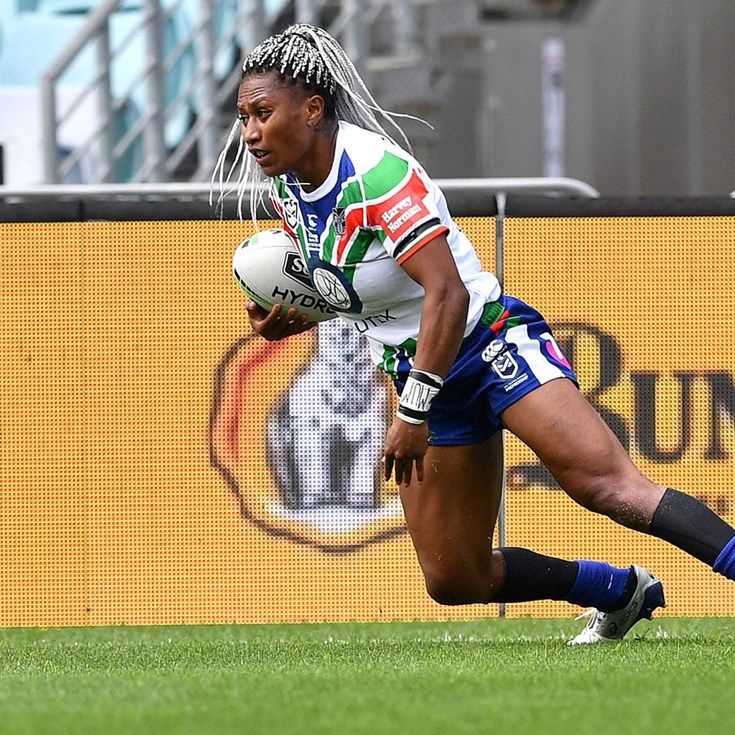