Here's all you need to know about the Canberra Raiders' 2021 Telstra Premiership draw.

Canberra should start favourites in each of their first four games, beginning with a home clash against the Wests Tigers. Matches against the Sharks, Warriors and Titans follow before a couple of tricky contests against top-four contenders Penrith in round five and Parramatta in round six.

Both these teams should again be in premiership contention, making these two contests a crucial barometer of how they'll be shaping up in next year's finals equation.

Bulldogs (Round 10, Suncorp Stadium – Magic Round)

Canterbury splashed the cash to land former Raiders star Nick Cotric, who will go up against his old teammates in Magic Round in Brisbane. The neutral venue means Cotric won't have to face a Canberra home crowd this year.

The teams met once in 2019, with Canberra prevailing 34-20 at home, and they'll be expecting to get the job done again in round 10.

These teams have established a finals rivalry in the past couple of seasons. Canberra toppled the Storm in Melbourne in the opening week of the 2019 finals before the Victorian club got revenge in the 2020 preliminary finals.

The teams split the results in the regular season – Canberra winning once again in Melbourne while the Storm got the points at GIO Stadium – so these matches are shaping up as more unpredictable blockbusters next season.

The Raiders sent the defending premiers packing in the second week of the 2020 playoffs, Jack Wighton leading the Green Machine to a 22-18 victory.

The Tricolours will have a new halfback but remain an NRL powerhouse and will be desperate for revenge when the teams meet in Perth in May, having already beaten Canberra at GIO Stadium 18-6 last year.

Manly have been a bogey team for the Raiders lately, winning five of the last six contests between the sides including the last three (Canberra's last win over the Sea Eagles was a narrow 21-20 escape at home in 2018). The Green Machine get two chances to make amends in the second half of the season.

An eight-game stretch throughout April and May looms as the trickiest period for Canberra, with a run of matches against opponents including Penrith, Parramatta, South Sydney, Newcastle, Melbourne and the Roosters.

All six teams played finals football this year and should be contenders again next season, with the run culminating in a trip to Perth to face the Tricolours ahead of a round 13 bye.

Fans in Wagga Wagga were made to wait for their next taste of live NRL action when a planned Raiders-Knights match in the town in April this year was cancelled due to COVID-19 restrictions.

But they'll get their chance to see both teams in action when they face off on May 8 at McDonalds Park. Canberra last played at the venue in round 8, 2019, beating the Panthers 30-12 on that occasion. 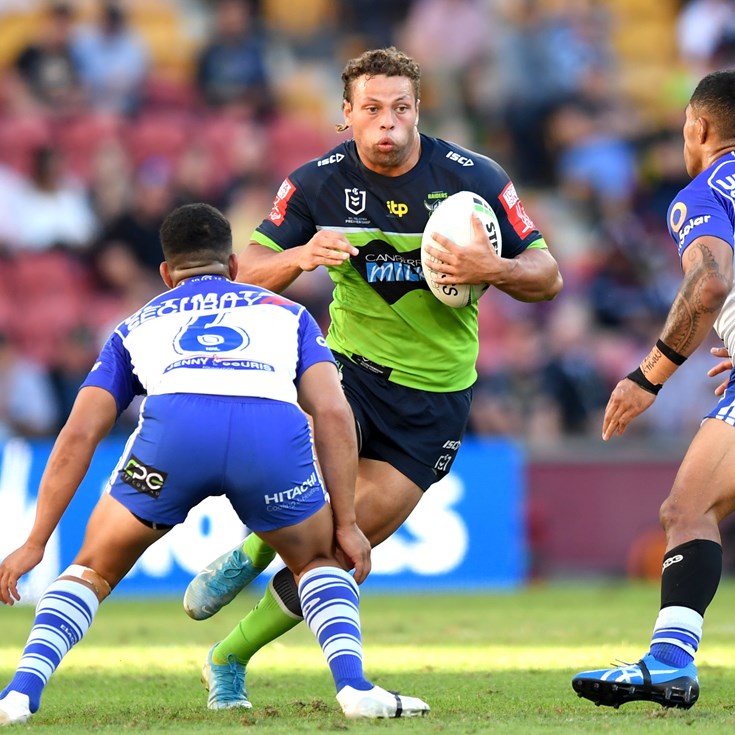 Seb Kris delivers for Canberra in season that almost never was