Newcastle go into their 2021 season opener against the Bulldogs at McDonald Jones Stadium with star recruit Tyson Frizell in their pack and a finals campaign under their belts but lacking all-important momentum.

The Knights suffered a third successive defeat in their only 2021 trial against Melbourne, capping a sequence stretching back to their round 20 loss to the Titans which features heavy losing margins of 20 (Storm), 26 (Rabbitohs) and 30 points (Titans).

To add injury to insult Newcastle look certain to be without gun fullback Kalyn Ponga until possibly round four.

Canterbury, on the other hand, may have avoided another wooden spoon thanks to points difference in 2020 but look capable of flipping the script on their more heralded opponents after a gritty come-from-behind win in their trial against Cronulla.

Knights: Hymel Hunt has overcome a hamstring injury and is a late inclusion on the wing in jersey 18. Gehamat Shibasaki drops out. In another late switch Sauaso Sue will start the game at lock and Connor Watson shifts to the bench.

Tex Hoy slots in at fullback and Kurt Mann at five-eighth.

Star recruit Tyson Frizell will launch his Knights career in the second row while Jayden Brailey is back from a knee reconstruction at hooker. Back-rower Mitch Barnett will reportedly take on the goal-kicking duties while Ponga is sidelined.

The Knights have opened the season with a win for the past three years.

Jack Johns and Simi Sasagi were the first two players cut from the squad 24 hours before kick-off. Shibasaki and Pasami Saulo were omitted an hour before game time.

There was some concern about Averillo's fitness, with playmaker Brandon Wakeham included on the extended bench as cover, but Wakeham and Ava Seumanufagai were the first two players cut from the squad on Thursday.

Train-and-trialist hooker Bradley Deitz has been named on the bench in Marshall-King's absence. The 26-year-old has been given an NRL exemption to play from outside the club's top 30 given Marshall-King’s injury with Sione Katoa starting as the Bulldogs’ other hooking option.

Former Rabbitoh Corey Allan will make his Bulldog debut at fullback with former Rooster Kyle Flanagan to steer the ship from halfback. The Bulldogs have won eight of their past nine games against the Knights.

Chris Smith and Tuipolotu Katoa were the last two players cut an hour before kick-off.

Mitchell Pearce v Kyle Flanagan: The Knights veteran endured a nightmare off-season away from the field but will be hoping a return to action, and the likelihood of a new deal in the near future, are a sign of better things to come.

Flanagan, on the other hand, faces all his pressures once he crosses the white line. Released by the Roosters after just one season, the young play-maker knows the heat is on after former Sharks team-mate Wade Graham gave him a torrid time in the trial.

Veteran prop David Klemmer carried the young Knights pack on his back last season and he will be expected to once again lead from the front in 2021. Klemmer was second in the NRL in post-contact metres, a mere three metres behind Penrith's James Fisher-Harris, and No.2 in off-loads, nine behind Eel Junior Paulo but 10 ahead of third-placed Martin Taupau. 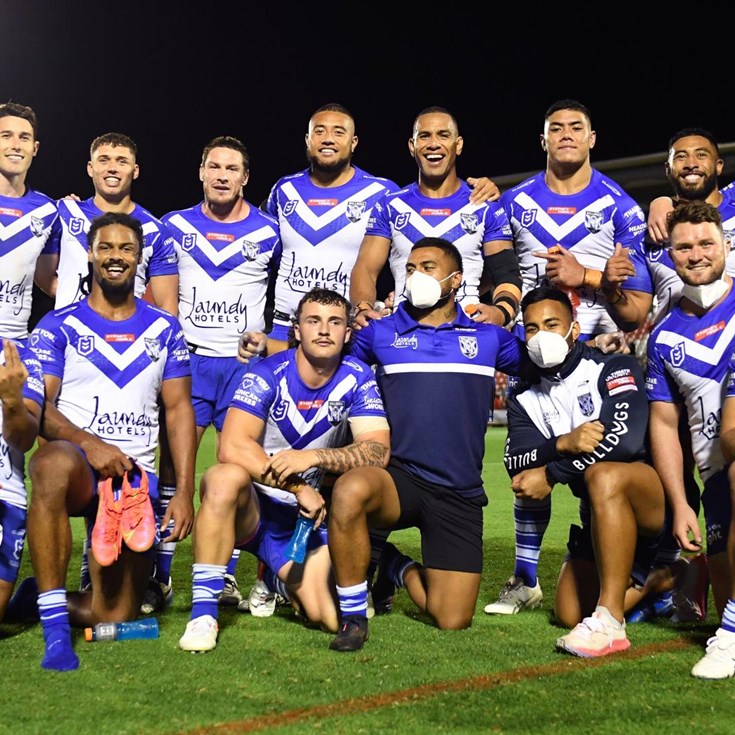