Aside from an unhappy first half of the grand final, pretty much everything went right for the Panthers in 2020.

But that golden season will count for little when the Cowboys visit Panthers Stadium on Saturday night as teams coached by Ivan Cleary and Todd Payten start the new season on level footing as far as the ladder is concerned.

Payten's players have spoken of transitioning to an up-tempo style of play over the summer and on Saturday we will get a first proper glimpse of that.

As for the Panthers, Cleary will want to see the selfless style of play and willingness to do the little things that were hallmarks of 2020 remain evident.

Panthers: The Panthers will line up 1-17 with Robert Jennings and Mitch Kenny omitted an hour before kick-off.

Moses Leota can't be expected to fill in for the experience left by James Tamou, but he'll need to replicate his consistent level of performance when he steps out as James Fisher-Harris's front-row partner. Bench forward Spencer Leniu will also be expected to help fill that void. The Panthers' bench is a work in progress with Scott Sorensen still sidelined by a hamstring injury.

Paul Momirovski won the race to be Stephen Crichton's centre partner ahead of Tyrone May, who claimed a bench spot, with Brent Naden not being considered for selection in the first four rounds after his positive cocaine test in grand final week. J'Maine Hopgood and Matt Burton were the two players left out 24 hours before kick-off.

Penrith are aiming for their 10th consecutive win at Panthers Stadium.

Cowboys: No late changes for the Cowboys. Scott Drinkwater has won the battle for the No.1 jersey with Valentine Holmes named on the wing. Veteran forward Josh McGuire will be eased back from a hamstring injury on the bench with Francis Molo partnering Jordan McLean in the front row.

Hookers Jake Granville and Reuben Cotter (jersey 19), who can also play in the back row, have both been named on the bench. Coach Todd Payten has confirmed that Cotter will play as a lock. Flyer Hamiso Tabuai-Fidow has a chance to strut his stuff in the centres.

Tom Gilbert was unavailable for selection after suffering a leg fracture during a training ground mishap.

Shane Wright and Murray Taulagi were dropped on the eve of the match and Ben Hampton and Lachlan Burr were cut an hour before kick-off..

The Cowboys have not won at Penrith since 2016.

Jarome Luai v Michael Morgan: Luai proved himself one of the game's best five-eighths with an impressive 2020 campaign. He is a constant threat with ball in hand. Morgan hasn't found the going easy since his 2015 grand final heroics but he remains a class player and a man his team-mates look to for leadership.

Including the finals, Penrith won 20 matches last year. The Cowboys have won 22 games in the past three years. A new season does bring with it new hope, but Penrith will rightly start as warm favourites. 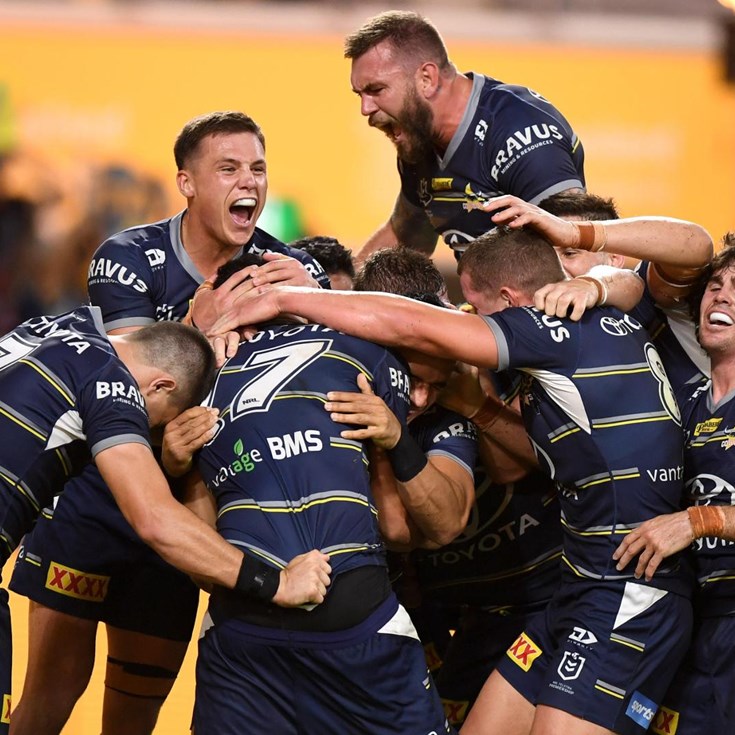 Frame by frame: A unique look at the 2021 NRL Telstra Premiership grand final

Presented By Sportsbet 2 weeks ago
04:35