The wounded Roosters certainly have a job on their hands to quell the high-spirited Warriors, who turned a 19-point deficit into a three-point win over the Raiders last week.

Captain Roger Tuivasa-Sheck nailed it in his post-match interview when he said his side had lost so many close games at the death, it was uplifting to finally win one.

The Roosters have the opposite emotions churning in their minds. They lost both halves in Luke Keary (ACL) and Lachlan Lam (knee) in a bruising 26-16 defeat by the Rabbitohs in round three. These are the types of players who win you games in the dying stages.

But three premierships in the past eight years means there's a fair bit of steel in whatever the Tri-Colours set their minds to do.

Roosters: Former Bulldogs hooker Benjamin Marschke comes on to the bench in place of outside back Matt Ikuvalu in the only match-day change to the home team's 17. Ikuvalu and Egan Butcher are the men to omitted from the squad.

Victor Radley makes a welcome return from a shoulder injury at lock for the 2019 premiers. Last week's No.13 Isaac Liu moves up to prop to replace Lindsay Collins (ankle).

Nat Butcher is the other new face on the interchange. Joseph Suaalii and Tukupa-Ke Hau Tapuha were trimmed from the reserves on Saturday.

Peta Hiku was ruled out with a knee injury that is expected to sideline him for at least a month. Former Bulldog Marcelo Montoya has been called into the centres to make his club debut in Hiku's place.

The Warriors have made a late switch to their starting side - Bailey Sironen has been dropped to the bench with Jazz Tevaga elevated to the run-on team at lock, with Tohu Harris switching to the second row.

Tom Ale and Kane Evans were cut from the extended bench 24 hours before kick-off. Paul Turner and Rocco Berry were dropped on game day.

Jared Waerea-Hargreaves v Addin Fonua-Blake: Sparks are bound to fly when one or the other way charges into the fray with the ball under his arm. They were New Zealand teammates in the Kiwis 2017 World Cup side before Fonua-Blake switched to Tonga.

He left Manly for the Warriors in the off-season so the big men are on a collision course once again. Another highlight will be the duel between Dally M-winning fullbacks in Roger Tuivasa-Sheck (2018) and James Tedesco (2019).

The may have lost players left and right but the Roosters still have the NRL's two leading try-scorers remaining healthy - Brett Morris (seven) and Tedesco (six). 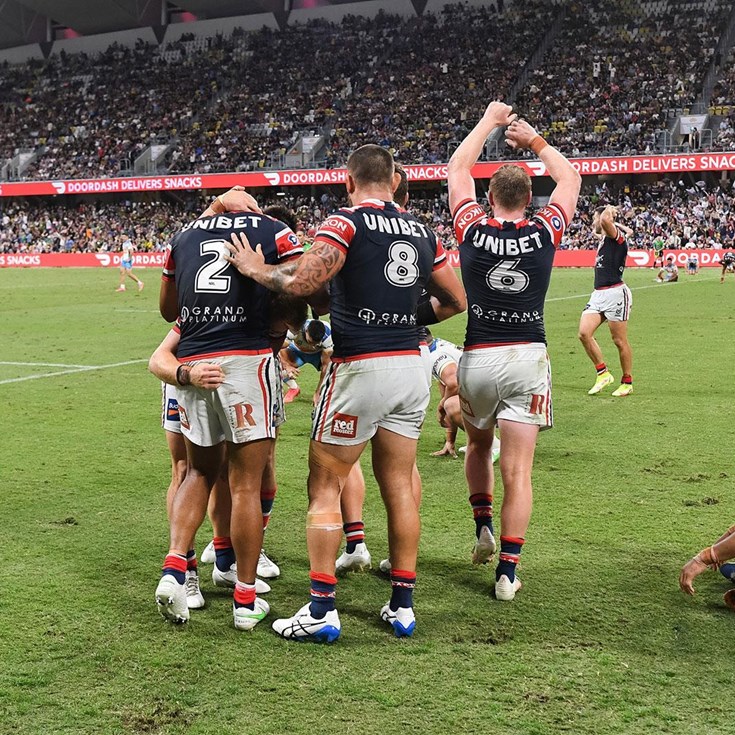