The Cowboys get a priceless chance to break their 2021 drought when they take on the crippled Sharks in a Saturday night clash shifted to Netstrata Jubilee Stadium due to Queensland's COVID-19 outbreak.

Cronulla suffered a horror injury toll in their 28-4 loss to the Eels at Bankwest Stadium, forced to play the second half with no-one on the bench after losing Wade Graham, Briton Nikora and Will Kennedy to concussion and Sione Katoa to a knee injury in the first 40.

North Queensland have endured a roller-coaster ride this season.

They bounced back strongly against the Dragons, without claiming the two points, after their 28-0 capitulation to Penrith in round one but slumped again to a 44-8 flogging at the hands of the Gold Coast last weekend.

Sharks: Cronulla are 1-17, with Will Kennedy and Wade Graham (head knocks) both cleared to face the Cowboys.

Winger Sione Katoa suffered a knee injury midway through the first half in Saturday's loss to the Eels and is looking at eight weeks out. He has been replaced by Mawene Hiroti.

Briton Nikora accepted a two-week ban for a shoulder charge on Clint Gutherson and his spot in the pack has been taken by Teig Wilton. The new face on the bench is Braydon Trindall.

Centre Jesse Ramien (suspension) will be available for round five while forwards Royce Hunt (knee) and Siosifa Talakai (shoulder) had their returns pushed back to about round seven.

Frankline Pele and Nene Macdonald dropped off the reserves list on game day after Andrew Fifita and Jason Taumoepeau were the two players left out 24 hours before the match.

The Sharks have won their past five games against the Cowboys.

Cowboys: Coach Todd Payten's patience has run out after three losses with Jake Clifford and Esan Marsters dropped while Mitchell Dunn (foot) and Reuben Cotter (head knock) have missed out through injury.

Justin O'Neill will move from the wing to the centres and partner Connelly Lemuelu, who has come in for his first game of the season. Youngster Hamiso Tabuai-Fidow will go back to the wing.

With Clifford gone, Ben Hampton has been brought into the side at halfback to partner Scott Drinkwater.

The back row has taken on a whole new look with Ben Condon coming in for his second NRL game to join Shane Wright and Josh McGuire.

Jake Clifford and Peta Hola were omitted from the reserves an hour before kick-off after Marsters and Griffin Neame dropped out of the squad the day before the match.

Second-rower Coen Hess will make his 100th NRL appearance from the bench with Payten hoping to "simplify" his role.

Matt Moylan v Ben Hampton: The Sharks will be looking to their veteran five-eighth to provide spark and inspiration after their draining loss to Parramatta.

Moylan is fit and playing well after two injury plagued seasons and will be eager to answer the bell. Hampton has been given the reins at North Queensland after a shoulder injury sidelined veteran Michael Morgan.

The Sharks have a five-match winning streak going against North Queensland and will be desperate to maintain that dominance despite being so low on cattle.

Current Cowboys Kyle Feldt (due back from suspension this week), Ben Hampton, Jake Granville, Jordan McLean, Coen Hess and Corey Jensen were all part of the last side to get one over the Sharks in 2018. 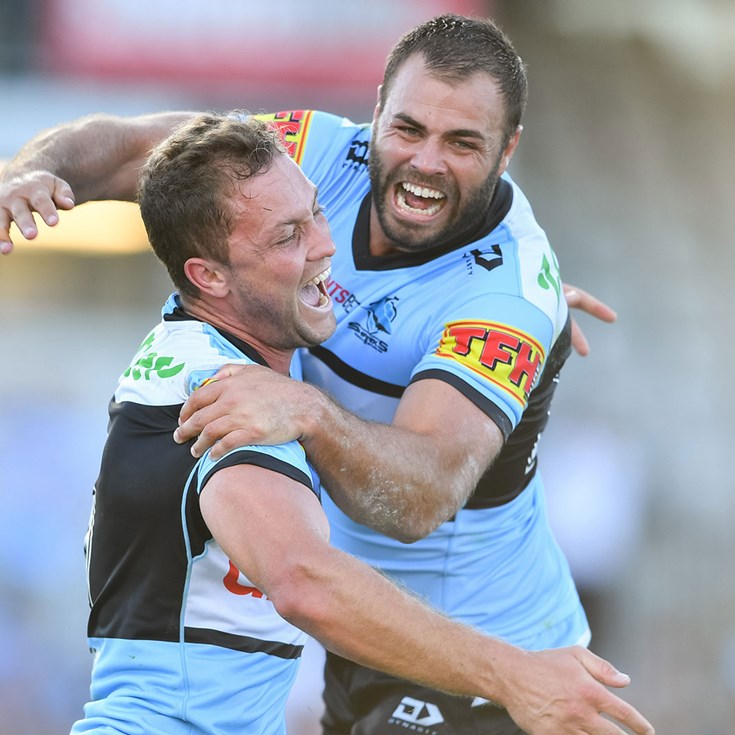