The is arguably the match of the round as it brings the runners-up from the past two grand finals together to determine who is the better-looking premiership material at this early stage.

The Panthers proved stronger by a whisker over the Storm two weeks ago and Ivan Cleary's side can again count on the Penrith faithful at BlueBet Stadium when the Raiders visit.

The competitor inside Ricky Stuart would love to orchestrate the Panthers' first loss of the season. But to do that he will need another strong defensive effort like his Raiders produced against the Titans on the back of 47 per cent possession.

They denied two Titans tries near the corner posts through desperation defence.

Panthers: The Panthers will line up 1-17 as named. Unsurprisingly, coach Ivan Cleary stuck with the same 17 that proved far too good for Manly.

Robert Jennings and J'maine Hopgood were omitted 24 hours before kick-off. Scott Sorensen was the last man cut an hour before game time and Jaeman Salmon is the 18th man.

The Panthers are aiming for a 5-0 start to the season for the first time in the club’s history.

Raiders: Ryan James and Iosia Soliola have been brought into the starting team an hour before kick-off with Ryan Sutton and Joseph Tapine reverting to the bench.

Tapine is returning from an ankle injury and was named to start on Tuesday but will be kept out of the early exchanges.

Semi Valemei and Dunamis Lui were cut 24 hours prior to kick-off. Sam Williams was cut an hour before kick-off and Corey Harawira-Naera is the 18th man.

Winger Jordan Rapana has scored 10 tries in 11 games against the Panthers.

The kicking games of Nathan Cleary and George Williams - especially in setting up tries for their outside men - will be crucial. The vision of these two in setting up attacking situations has them level at three try-assists each as they try to outwit each other here with boot and pass.

Cleary and Jerome Luai have a combined eight forced line drop-outs so far, which is a lot more than Williams and Jack Wighton's total of three. 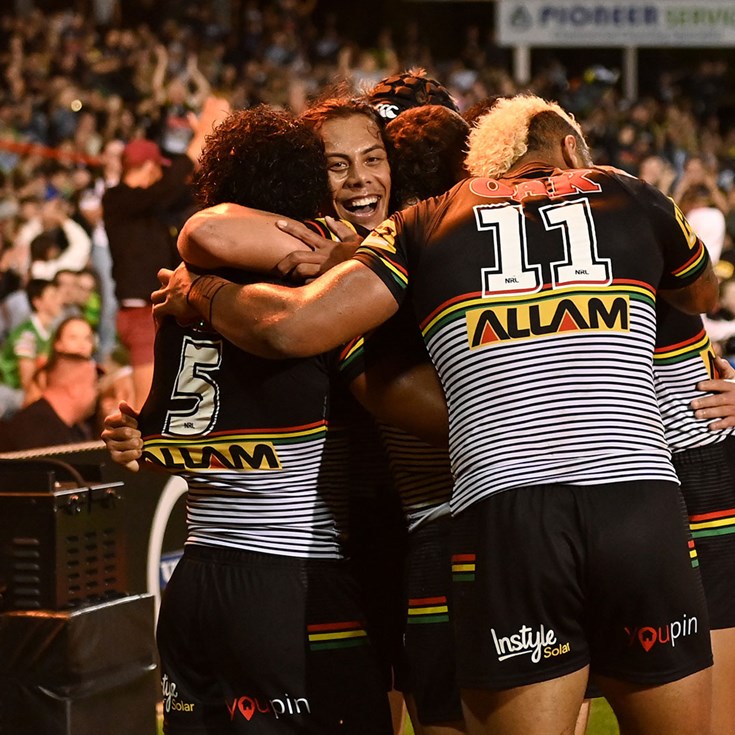