Melbourne Storm coach Craig Bellamy believes the ability to use Harry Grant and Brandon Smith in tandem out of dummy half can prove pivotal for his side this season.

A masterclass by Grant led the Storm to a 20-4 win over the Roosters in Friday night's heavyweight showdown at AAMI Park, but Smith also had his moments as the duo performed well in the same side for just the second time this season.

Grant's class shone brightest during an old-fashioned bruising contest between the two best sides of the past decade, the classy hooker setting up two tries and scoring one of his own to help the Storm rack up their fourth win of 2021.

The Storm led 4-0 after a lacklustre first half, but the game sprung to life after the break courtesy of the Queensland Origin star.

Grant had a hand in four-pointers to Jahrome Hughes and Ryan Papenhuyzen, before he spotted a gap and crossed for his own try in the 68th minute to ice a superb individual display.

"But I thought Brandon played strong for us tonight and they did a real good job in the first 20 minutes of the second half when they were going in tandem.

“Our improvement can come from the combinations of those two guys with the rest of the team and particular the spine and I think there are some good times ahead for this team."

Bellamy said he won't be rushed into a decision on how best to use Grant and Smith for the remainder of the season as their partnership is still in its early days.

"With Brandon starting it takes the edge off Harry, but we might swap it around," Bellamy said.

"Because Brandon does a great job in his other role (loose forward) as well, we will take it week by week.

"They are still working on their combinations in every training session and every game. Harry has only played four games for the Storm and has missed a lot of training with his injury after the trial.

It was billed as a clash between the two best fullbacks in the game and it was Papenhuyzen having the last laugh over James Tedesco with a try and 106 running metres as the premiers flexed their muscle in front of a raucous home crowd.

Tedesco didn't get many opportunities to show his attacking wares, with a 68 percent completion rate across the 80 minutes making it hard for the Roosters' potent attack to put any points on the board.

The Tricolours missed the scoring prowess of Brett Morris, who was a late withdrawal with calf tightness, and the loss of Siosiua Taukeiaho (ribs) and Jared Waerea-Hargreaves (shoulder) in the second half only added to their woes.

These teams have produced some classic contests over the years, but the opening 40 minutes could hardly be lumped into that category as defence dominated and both sides made uncharacteristic errors.

Papenhuyzen sent a scare through the Storm camp when he left the field for a HIA test in the fifth minute and in his absence, Cameron Munster missed a simple penalty goal that would have given the hosts the lead.

The sin binning of Victor Radley for a high shot on Munster gave the Storm a one-man advantage but the only points they could put on the board came courtesy of two Papenhuyzen penalty goals for a 4-0 lead at half-time.

Some late class from Tedesco

Something had to give in the second half and it was a sublime piece of dummy half play from Grant that did the trick.

The 2020 rookie of the year produced a pass that former skipper Cameron Smith would have been proud of to put Hughes over for the game's opening try and a 10-0 lead.

Just seven minutes later the Storm had their second, with Brandon Smith delivering the final ball on this occasion for the durable Papenhuyzen to take over the line for his seventh try of the season.

It was then left to Grant to seal the two points for the hosts when he darted over from dummy half.

A last-minute try to Matt Ikuvalu from a James Tedesco chip kick was little consolation for the Roosters, who will lick their wounds and prepare for a showdown with the Dragons on Anzac Day. 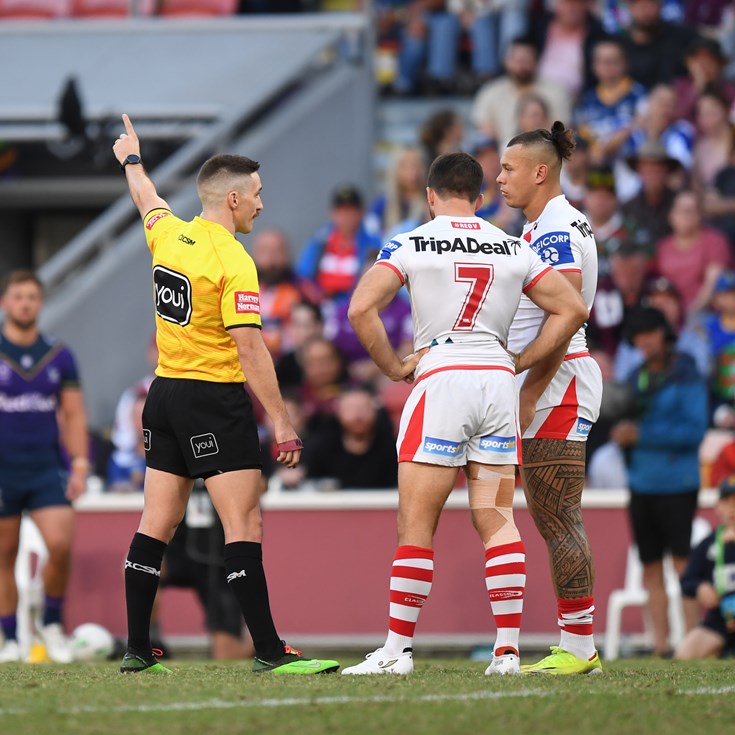 Fuimaono sent off for Papenhuyzen hit as Storm smash Dragons

Teddy carried us on his shoulders: Robbo in awe of his No.1 gun