Cronulla are hoping it will be a case of third time lucky against Canterbury Bankstown after successive late-game defeats to the Roosters and Knights.

The Sharks coughed up the lead in those matches with eight and three minutes left, respectively, and have tumbled out of the top eight as a result.

The clash with Canterbury presents the Sharks with a great opportunity to change their season's narrative and news that play-maker Shaun Johnson could be making his return adds to the positive vibes.

The Bulldogs have finally got their attack working after going scoreless in three consecutive matches but back-to-back three-try efforts haven't been enough to compensate for a leaky defence.

Canterbury are conceding 34 points a game in 2021 and have only held their opponents to fewer than 30 points in two of their six matches.

Sharks: Matt Moylan (quad) is out of the Cronulla side, with Shaun Johnson returning from his Achilles injury and starting at five-eighth while Braydon Trindall is added to the bench. Franklin Pele is the 18th man.

Josh Dugan will return in the centres after missing last week's game due to a head knock suffered in round five so Teig Wilton has gone back to the second row and Jack Williams to the bench.

Former Storm star Will Chambers was included as a reserve for his new club but was omitted on Friday, along with Jenson Taumoepau, and is likely to play for Newtown to gain match fitness.

Skipper Wade Graham remains sidelined as he continues his concussion recovery while Aiden Tolman will miss the match after taking an early guilty plea on a crusher tackle charge.

The Sharks have won six of their past seven games against the Bulldogs.

Bulldogs: Nick Meaney has been promoted from the reserves to fullback for the injured Dallin Watene-Zelezniak.

Dylan Napa and Luke Thompson are the new starting props with Jack Hetherington suspended and Renouf Atoni named on the bench after starting last week in the front row.

Chris Smith has been promoted from the bench to start in the second row while Jackson Topine is out with bone bruising on his knee and Ofahiki Ogden has been left out.

The three new faces on the bench are Brad Deitz, Ava Seumanufagai and Matt Doorey.

Brandon Wakeham is the 18th man, with Lachlan Lewis, Joe Stimson and Aaron Schoupp dropping out of the initial 21-man squad named on Tuesday.

Chad Townsend v Kyle Flanagan: If a series of events not linked to this pair had played out differently, Flanagan could be the one wearing the Sharks No.7 jersey in this match. Instead, after a season at the Roosters, he is now in Canterbury colours and hoping to get the better of his junior club.

Townsend, meanwhile, will want to put a pair of tough games against the Roosters and Knights well behind him.

If last-placed Canterbury can't get past the hard-luck Sharks this week they look in grave danger of blowing past their club record losing streak of 11 (1955/56 and 1965/66). The Bulldogs have lost seven in a row stretching back to round 20 last season and after their round seven date with Cronulla face consecutive games against the Eels, Dragons, Raiders, Titans, Panthers, Eels, and Dragons. 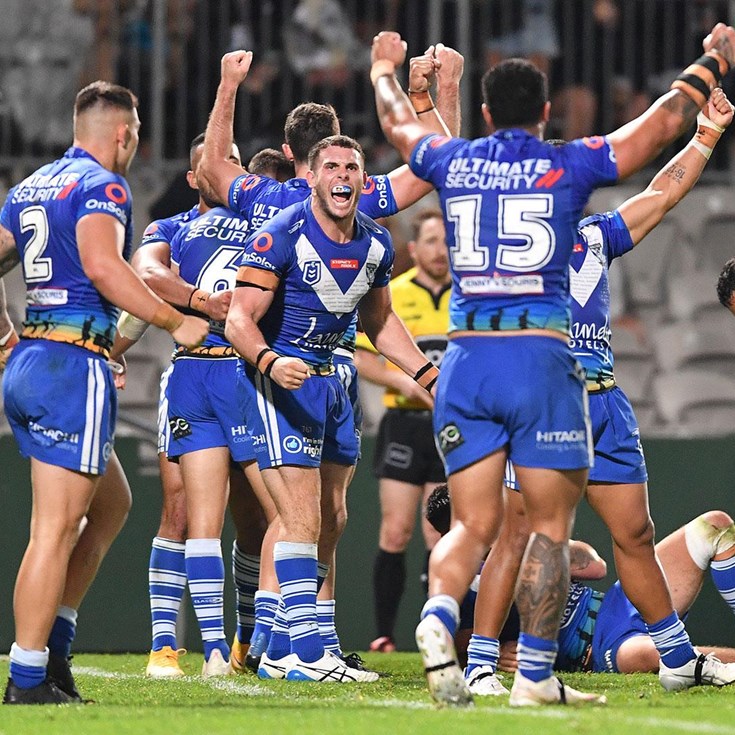 Re-live the final moments of Sharks-Bulldogs