David Fifita’s contender for Try of the Year wasn’t enough to prevent a Benji Marshall-inspired South Sydney from making it six wins in a row at Cbus Super Stadium on Friday night.

In what will be remembered as one of the most entertaining games of the NRL season, the stars for both sides produced champagne football in a high-scoring affair that produced moments of stand-and-applaud action as the Rabbitohs prevailed 40-30 over the Titans.

Fifita owned the first half, but ultimately it was Benji who stole the show.

The Kiwi superstar finished the night with two tries, three line break assists and a hand in almost everything the Rabbitohs did in attack as he starred alongside second-rower Keaon Koloamatangi to overhaul the 24-10 half-time deficit.

The Rabbitohs produced a near-perfect second half with no errors and a 20-point onslaught in 13 minutes that Wayne Bennett described as game-defining a half-time wake-up call from the coach.

"I wouldn’t call it a rev-up," Bennett said.

"We had to do something, we were heading into the abyss and we had a chance to regather ourselves, gather our thoughts and get our game back on track.

Marshall creates himself a double

"The first 10 minutes of the second half sealed the game for us because we took away all their field position, we picked up two tries and it was pretty much down to those 10 minutes in the second half and we had to nail it and if we didn’t we would’ve lost by another 20-odd points."

Marshall threw a superb cut-out pass to Alex Johnston and then pushed up in support to get the ball back and score beneath the posts for his second try of the night in the 71st minute and seal the win in front of 17,383 fans.

Promoted to the starting line-up for suspended fullback Latrell Mitchell, Marshall proved Bennett’s move to be a masterstroke as he ignited the second-half fightback.

Marshall, who played five-eighth with Cody Walker shifted to fullback, was everywhere and even threw one of his sublime round-the-body offloads for Johnston’s 58th-minute try.

Bennett couldn’t help but notice how some clubs are struggling to find answers in their halves but only the Rabbitohs were willing to offer Marshall a deal into his 19th season.

"I keep reading about clubs that are going to have overhauls of players or rosters and here is a guy that nobody wanted," Bennett said.

"He has been wonderful for us. We love having him and he loves playing for us so you can’t have a better relationship than that.

"He is just an average guy, down-to-earth and knows his game really well and knows all the processes that go into making a good game of football. His second-half performance tonight was pretty outstanding."

While Marshall got his side home, just imagine what South Sydney could’ve done if they had Fifita on their side.

David Fifita with a try you need to see to believe

Bennett revealed how he wanted the back-rower to join his club only for him to choose a rich deal at the Titans.

Fifita starred with three tries in the first half, brushing aside multiple defenders at a time as Bennett joked the only way to stop him had left his front-rower ruled out for the game under a HIA.

"Well I’ve coached a lot of games -nobody is unstoppable, but he is a player," Bennett said.

"Tackle around the legs. Junior [Tevita Tatola] got knocked out trying to do that so he is probably not so keen now.

"That’s why they paid the money they paid for him. I tried to get him to Souths but he didn’t want to come to Sydney." 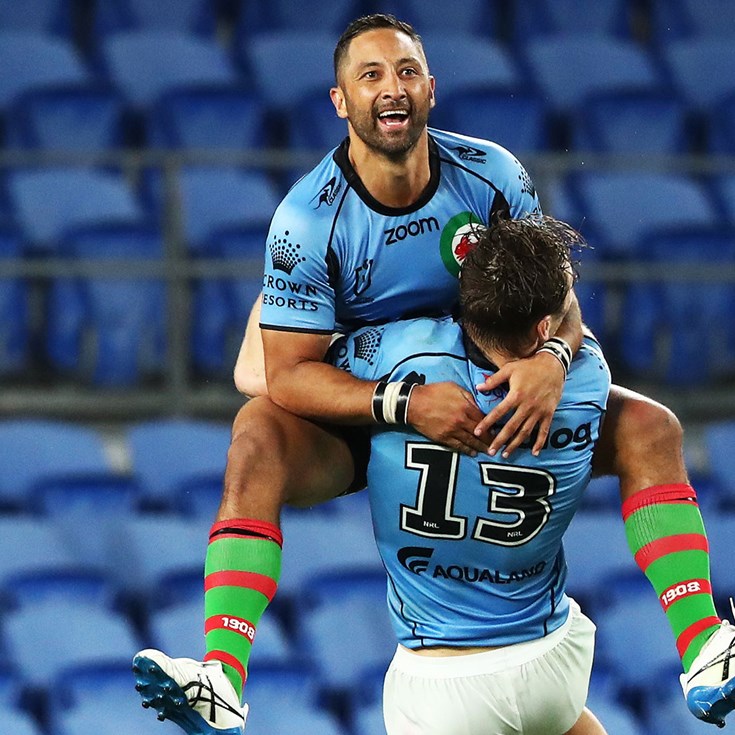 David Fifita gets his second hat-trick of the year