The Wests Tigers return to Campbelltown Sports Stadium for the first time since round two, coming off a morale-boosting win in Wollongong against the Dragons.

Coach Michael Maguire has tasked his side with matching that sort of effort week-to-week and they can expect a physical clash against a Titans side stinging from a last-up loss to the Broncos.

Justin Holbrook's men gave up a 22-0 lead to be run down at Suncorp Stadium last Friday but will be happy to travel to Campbelltown - a venue where they have won on their past two visits in 2017 and 2016.

They have conceded 112 points in their past three games and are staring down the barrel of a fourth straight loss if they can't fix up those defensive frailties.

Wests Tigers: With Tommy Talau out suspended, Moses Mbye has been named in the centres. Jacob Liddle is the new man on the interchange to cover for Mbye's elevation.

James Roberts (chest) will miss a few more weeks. Zac Cini enjoyed a fine debut on the wing and has retained his spot.

Zane Musgrove dropped out off the reserves list on game day with Michael Chee Kam the 19th man. Tom Amone and Shawn Blore were omitted from the squad 24 hours before kick-off.

Winger David Nofoaluma has scored five tries in his past four games against the Titans.

Titans: Ash Taylor has been ruled out as he battles to return to full fitness after off-season hip surgery. Tanah Boyd will take his place in the starting side.

Tino Fa'asuamaleaui's return from a shoulder charge ban is a huge boost for a Titans pack that has been outmuscled in recent weeks. Moeaki Fotuaika drops back to the interchange bench.

With winger Corey Thompson set to miss at least eight weeks with a syndesmosis injury, Beau Fermor comes into the centres and Phillip Sami moves on to the wing.

Esan Marsters and Jaimin Joliffe are new faces on the bench. McIntyre is 18th man with Jayden Campbell dropping out of the squad on game day. Erin Clark was omitted from the squad on Friday.

The Titans have won six of their past eight games against the Tigers.

Daine Laurie v AJ Brimson. In the talent-laden fullback position, this duo are slowly working their way up the pecking order. Their elusive running styles ensure opponents always have something to worry about.

The Titans have conceded 112 points in their last three matches. In their first five they allowed just 79. Until they can get their defence in order, talk of finals football will remain on the backburner. 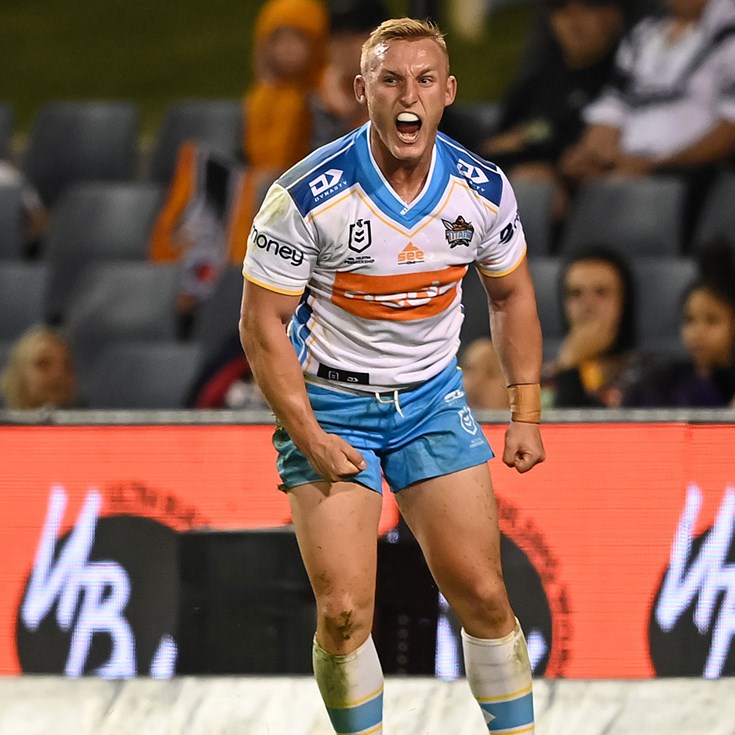