Melbourne are on a roll and it would be foolish to assume that injuries and State of Origin commitments will knock the second-placed Storm off track.

Jahrome Hughes is the only regular member of the Storm spine available for this match but Craig Bellamy has a track record of coming up with answers that ensure any pressure is transferred to Melbourne's opposition.

Nicho Hynes has been in incredible form whether picked in the No.1 or No.6 jersey with the team's mixture of hard heads and rising stars continuing to form a potent combination.

The Gold Coast have also lost four players to Origin duties but their erratic form of late, particularly their deflating round 12 loss to Cronulla, has them much less well-placed to cope.

Coach Justin Holbrook will be leaning heavily on the likes of captain Jamal Fogarty and veteran back-rower Kevin Proctor to get the Titans back on track and living up to the hype that had them pegged as top-eight material.

Storm: There are no last-minute changes with Isaac Lumelume named 18th man and Ryley Jacks the final match-day cut from the squad.

Sunshine Coast local boy Trent Loiero has come into the Storm's 17 with Tom Eisenhuth withdrawn from the side on Friday due to a concussion suffered in last week's win over Brisbane.

Chris Lewis is the new second-rower and Loiero is on the bench.

Kenny Bromwich (hamstring) is fit to play and will replace Maroons back-rower Felise Kaufusi in the second row while Dean Ieremia gets the call to take over from Blues winger Josh Addo-Carr.

Cooper Johns is named to start at five-eighth after being a late inclusion the past two weeks while Storm giant Nelson Asofa-Solomona gets another start in the front row.

Eisenhuth and Jordan Grant were the two players to drop out of the squad on Friday.

The Storm have won six from six at Sunshine Coast Stadium.

Titans: Tanah Boyd has been named 18th man and Darius Farmer is the final omission one hour from kick-off.

Hooker Mitch Rein (shoulder) and winger Anthony Don (hip) earlier dropped out of the Titans team to play the Storm with Greg Marzhew making his NRL debut on the wing and Erin Clark starting at hooker for the Titans. Rein and Don are expected to only miss one game.

Ash Taylor returns from injury to partner Jamal Fogarty in the halves and Tyrone Peachey has to be content with an interchange spot on his return from suspension.

Origin has forced Justin Holbrook to make a raft of changes including handing Titans legend Preston Campbell's son Jayden his debut at fullback in place of AJ Brimson and naming Joseph Vuna, younger brother of former Knight Cooper, on the bench for his first NRL game since he played four for the Warriors in 2018.

Jaimin Jolliffe replaces Moeaki Fotuaika in the front row, Sam Stone steps into David Fifita's large boots in the second row and Sam McIntyre takes over the No.13 jersey from Tino Fa'asuamaleaui.

Jahrome Hughes v Jamal Fogarty: The Storm No.7 is the sole holdover from Mebourne's first-choice spine and bears the heavy responsibility of directing the team's attack - a responsibility he has accepted with aplomb in the absence of Cameron Munster and Ryan Papenhuyzen. So far has Hughes elevated his play that only the freakish Nathan Cleary has clearly been better at halfback.

Fogarty also faces plenty of pressure trying to lead a Titans squad that has failed to live up to expectations. His impact has been limited in 2021, the Titan's one try, six try assists and four forced dropouts failing to flatter when lined up against his Storm rival's six tries, 10 try assists and seven forced dropouts. 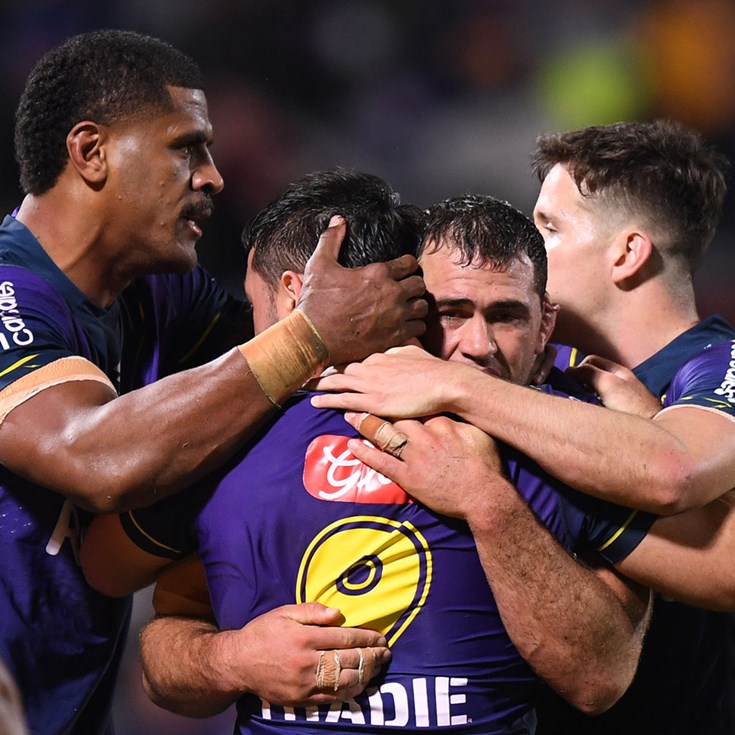