Manly skipper Daly Cherry-Evans needed just 48 hours to bury the demons of Origin I as he led the Sea Eagles to a thumping 50-18 win over the Cowboys at 4 Pines Park on Friday night.

Cherry-Evans was in everything as the Sea Eagles overcame a slow start to rack up their biggest ever win over North Queensland.

Among a host of stars for the home side, Reuben Garrick revelled in a game-day switch to fullback following the resting of Origin I man of the match Tom Trbojevic.

Garrick enjoyed his best game at the back after a couple of less convincing stints substituting for Trbojevic last year. Tonight he ran for a whopping 308 metres  including a length-of-the-field try to go with seven tackle busts and seven goals.

Cherry-Evans was a shattered Maroons captain just 48 hours earlier but rebounded impressively to guide his side to a commanding win in a game where the club paid tribute to club legend and rugby league Immortal Bob Fulton.

The 6,801-member crowd stood for a minute's applause after 175 seconds of play, a nod to Fulton's player number at Manly. His four granddaughters carried his jersey to the middle of the field before the opening whistle.

Manly coach Des Hasler felt the performance was a fitting tribute to Fulton.

"Over the last couple of weeks it's been an emotional time for his family and the club and the greater NRL family," Hasler said.

"It was very fitting and a great tribute to a great custodian."

DCE spots vacant space at the back and Walker scores

DCE's captain's knock included three try assists while his running game was at its best as he busted nine tackles in more than 130 metres.

It was a horror night for Todd Payten's men after surging to a 12-0 lead with their last-tackle options absolutely cruelling their hopes of even staying in the contest, while their defence though the middle should be of huge concern.

Fullback Val Holmes was well-contained back up from Origin duty on Wednesday and may have a concern for Origin II - he was placed on report for a possible shoulder charge right on half-time.

He has a similar charge already on his record from the end of the 2020 season and the loading would put him out for two games if cited.

A Marty Taupau error in the opening set allowed the Cowboys to attack, with Drinkwater threading a cross-field kick into the arms of Murray Taulagi, who did well in traffic to claim the ball and plant it down.

Drinkwater was at it again soon after with a lovely cut-out ball on the right edge to send Javid Bowen over untouched for a 12-0 lead inside 10 minutes.

Hasler wasn't too fazed by the team's slow start and praised the efforts of Cherry-Evans and Jake Trbojevic backing up from Wednesday's Origin.

"During this Origin period it's always uncertain," Hasler said.

"It probably wasn't our best start but they were able to come back and play some pretty good footy. It's always a difficult week leading into Origin with players being away but across the board we were pretty strong.

"Both boys were very determined. There was no way he was coming off at the end there either. It was a real good skipper's knock."

After being stunned early, Manly responded with a short kick-off that caught the Cowboys napping and while they didn't score off that set they had wrested back momentum.

Moses Suli was denied in the corner but Manly got the ball back for a high shot penalty and Kieran Foran dug into the line to deliver a great pass to put Brad Parker over in the 14th minute.

They broke the line and charged downfield off the next set with Haumole Olakau'atu leaping high to claim a Lachlan Croker kick in the 19th minute.

Suli and Croker combine as the Sea Eagles surge

Suli was denied again in the same corner from a long Cherry-Evans pass off a scrum but again it mattered little with Manly crossing soon after as Karl Lawton dived over from a quick Brad Parker play-the-ball in the 35th to claim the lead for Manly for the first time 16-12.

That was the start of a horror five minutes for the visitors; Manly scored again from the set, going the length thanks to some lovely passing between Croker and Suli on the left edge with Croker supporting to score.

Manly again scored from the set after points with just seconds to go before the break when Taniela Paseka made a midfield burst through Tom Gilbert, with DCE finishing the set with a kick out wide where Olakau'atu was on hand to beat three more to score for his first career double.

Tabuai-Fidow finds space on the left

The Cowboys desperately needed half-time but it didn't help them because they started the second half roughly how they ended the first – with terrible end-of-set execution and conceding tries.

A Cherry-Evans grubber ricocheting fortuitously for Foran to make it 34-12 less than five minutes into the second stanza before Garrick scooped up a Tom Dearden grubber near his own line and ran almost 100 to score a memorable solo try.

Dylan Walker won the race after a clever Cherry-Evans kick-ahead in the 65th minute before Hamiso Tabuai-Fidow finally got the Cowboys' third try, 65 minutes and 44 Manly points after their previous one, with a nice run on the left edge to beat Jason Saab in the 72nd minute.

Cherry-Evans had the final say though, lobbing a beautiful pass over to Brad Parker to score in the corner just two minutes from time to ice the win and raise the 50. 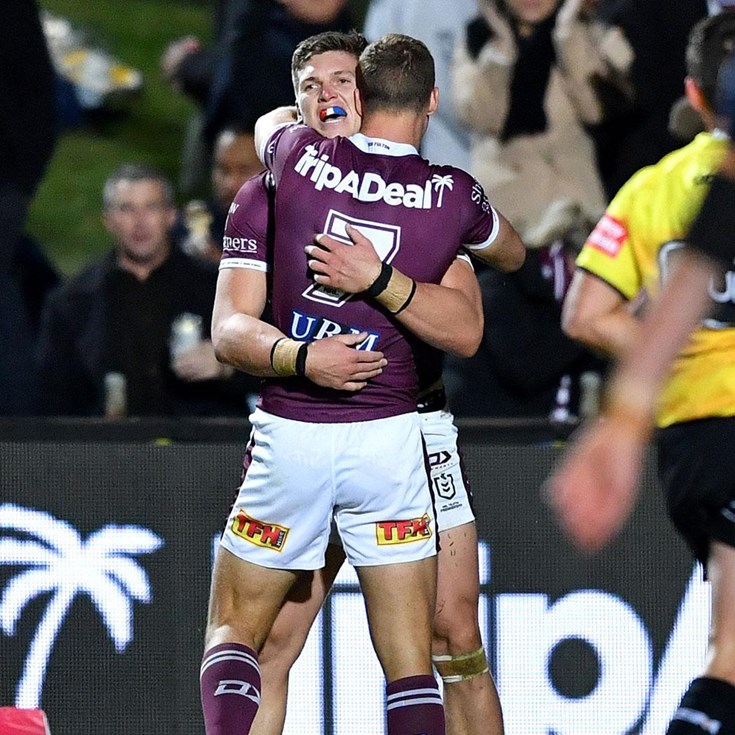