Mitchell Moses was the name on everyone's lips on Friday night as he chases a State of Origin berth but it was opposite number Matt Burton who had the last laugh to give the Panthers a 13-12 win.

The win was Penrith's 14th of the season but could possibly come at a cost for the Blues with five-eighth Jarome Luai booked in for scans on a knee injury suffered in the second half at BlueBet Stadium.

Luai played through the pain barrier to create some momentum for the Panthers late in the contest but it was Burton who stepped up with the field goal after an earlier attempt hit the left post.

It was Burton's first field goal of his NRL career after missing several attempts in a draw between the Panthers and Knights last season.

"It's a good feeling to ice it but it was a good game, the Eels came out firing and stuck it to us, we had to bring it back to them and match their intensity," Burton said.

"I don't really think about [past games] but in the moment I was thinking about [last year] when it hit the post.

"But as soon as I got the second chance I thought this is the time to pay it off."

Burton's efforts was another parting gift for the Panthers in his final season at the club but the Eels had a chance to win the match on the siren. Unfortunately for them, Moses' penalty goal attempt from 32 metres out and near the sideline sailed wide.

Broken play and it is Api times for Penrith

It capped a brutal contest and another Battle of the West chapter between the 2021 title contenders.

After being talked up as a replacement for Nathan Cleary in Origin III on July 14, Moses produced two kicks for Eels tries but the visitors struggled to find any in-roads into Penrith's gritty defence.

Life without Cleary proved an immediate struggle for the Panthers in attack with new halves combinationLuai and Tyrone May taking time to combine.

May was a late switch from the centres with Burton moving back to the left edge alongside Luai.

The Panthers led 6-4 at half-time in a tense contest before leading again by two points when Api Koroisau split the Eels defence with a solo effort with a quarter of the game remaining.

Panthers fullback Charlie Staines had a mixed evening deputising in the No.1 jersey with an error in the air that led to an Eels try before he didn't contest a Moses kick to hand the visitors a second.

May does it all himself for Penrith

A penalty goal to Moses levelled the scores with 24 minutes left on the clock as both sides went set-for-set in a high-intensity second half.

"We didn't play well in the first half, way too many errors and we tried to move the ball when we shouldn't have," Panthers coach Ivan Cleary said.

"We came here tonight focusing on teamwork, which we do every week but it's going to be more important with Nathan missing and the Origin guys coming back in.

"It was always going to be clunky but they were also difficult conditions, it was really dewy tonight. I thought the second half was much better."

Burton steps up to put his team in front

Gutherson went from hero to villain with a forward pass to Bryce Cartwright with four minutes left enabling the Panthers to take their first attempt at field goal but Burton's 20-metre strike hit the posts.

Moses was next to have a shot with two minutes remaining – the 43-metre strike sailing wide, before failing to boot home the match-winner on the siren.

Cleary was not happy with the last-minute call to award the Eels a penalty and a chance to win the game.

"I was angry, I think it's another example of our game encouraging playing for penalties," he said.

"That's how I felt at the time. He [Liam Martin] is heading back towards the ball. I feel like in our game it's encouraged. Any players watching tonight might do the same." 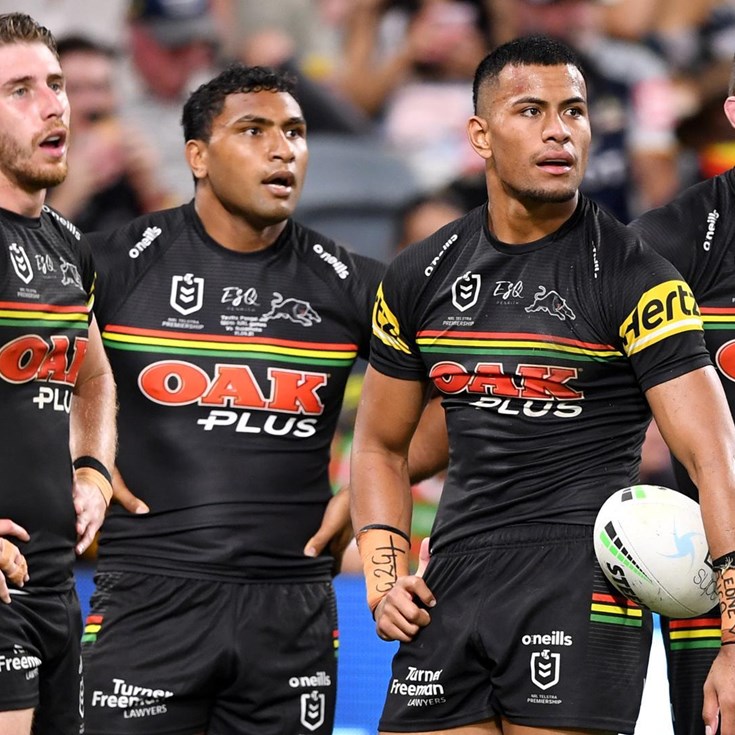 Presented By Sportsbet 4 hours ago
01:35