Canberra dug themselves out of a hole with a vastly improved showing in round 17 to take down the high-flying Sea Eagles.

Having won just two of 11 since round five, the Raiders were on the skids but with Joseph Tapine, Ryan Sutton and Hudson Young leading the charge they overcame the absence of Origin stars Jack Wighton and Josh Papalii to register a morale-boosting win.

The Sharks made it five wins from their past six matches by beating the Warriors and with Shaun Johnson in rare touch and a good draw heading towards the finals they are well placed to make a charge.

When the sides met back in round two it was the Raiders scraping home 12-10 as now departed Shark Chad Townsend endured a horror day with the boot landing just one from four.

Raiders: Jack Wighton and Josh Papalii are named to back up after Origin III but the prop has been moved to the interchange an hour from kick-off in a swap with fellow veteran Sia Soliola who will start.

Matthew Timoko has been handed 18th man duties and Trey Mooney drops out on the final 17.

Prop Dunamis Lui suffered a calf strain against Manly on Thursday and is expected to miss two games.

Matt Frawley and Harley Smith-Shields were the two players to drop out 24 hours before kick-off.

The Raiders have defeated the Sharks in their past five clashes.

Sharks: Josh Hannay has stuck with the same 17 that knocked off the Warriors but switched Siosifa Talakai into the starting side and Briton Nikora back to the bench.

Royce Hunt is 18th man and Luke Metcalf is the match-day omission.

Matt Moylan remains sidelined with a calf injury so Braydon Trindall stays in the halves alongside Shaun Johnson.

Will Chambers is sidelined again as he quarantines after a trip to Victoria for the birth of his third child.

Royce Hunt (knee) is listed among the reserves as he nears a return.

Billy Magoulias and Andrew Fifita were the players to omitted 24 hours before kick-off.

The Sharks have won five of their past six games.

Xavier Savage v William Kennedy: The Raiders rookie impressed on debut in the upset win over Manly with 102 run metres, three kicks defused and a pivotal try save on Brad Parker. Savage's willingness to get involved will stand him in good stead against a quality opponent. Kennedy doesn't get a lot of press but he has compiled a solid statistical portfolio in stats such as line-break assists, tries and try assists thanks to a number of influential performances this season.

The Raiders will be looking to extend a five-game winning streak against the Sharks. Cronulla haven't beaten Canberra since winning home and away in 2018. 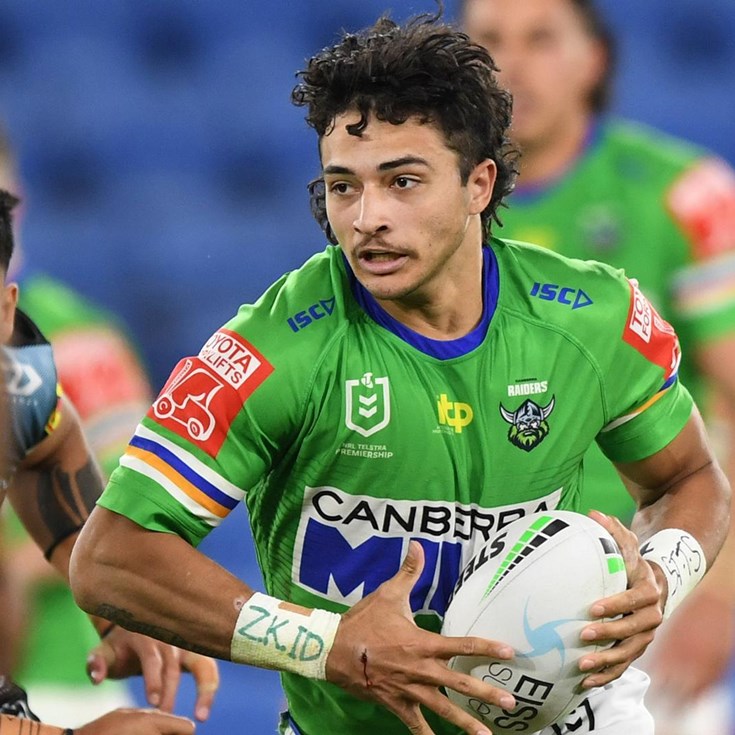 Savage gets Ricky's tick of approval for toughness