A Bulldogs side that has shown commendable persistence in recent weeks comes up against a Sharks side that has too often shown a soft underbelly as it loiters on the fringe of the top eight.

Too many Sharks failed to show up for last Saturday's clash with Canberra and the subsequent 34-18 defeat left Cronulla clinging to eighth spot on percentages ahead of the Raiders and Knights.

The side's record of seven wins and 10 losses, combined with a negative points differential, is a measure of the Sharks' underachievement and they can't keep on relying on the sides around them continuing to stumble if they have genuine finals aspirations.

The Bulldogs have bounced back well from their 66-0 hammering at the hands of Manly, pushing the Roosters before losing 22-16 and then giving South Sydney a real fright on the way to a 32-24 defeat.

Bulldogs: Just one change to the 17, with Renouf Atoni moving from the reserves list to the interchange. Falakiko Manu will be the 18th man.

Dummy-half Jeremy Marshall-King returns from suspension and a reshuffle in the pack sees Ava Seumanufagai promoted from the interchange to start in the front row with Luke Thompson switching to lock and Josh Jackson to the second row.

Joe Stimson is the new face on the bench. Ofahiki Ogden and Kyle Flanagan were omitted from the extended bench 24 hours before kick-off.

The Bulldogs can achieve two wins in a season against the Sharks for the first time since 2004.

Sharks: Teig Wilton is out. Briton Nikora starts with Andrew Fifita joining the bench. Jonaiah Lualua was the other player omitted from the squad on Saturday.

Billy Magoulias will be the 18th man for Cronulla.

Royce Hunt is on track to play his first game of the season in a timely return from a knee injury with experienced prop Aiden Tolman accepting a one-match ban this week.

Toby Rudolf moves from lock to replace Tolman in the front row with Jack Williams promoted to the starting side.

The Sharks have won six of their past eight games against the Bulldogs.

Luke Thompson v Aaron Woods: The English middle forward has been one of Canterbury's best performers this season, turning up on a weekly basis to do the hard yards required in attack and defence. He has averaged 136 run metres and 35 tackles per game. Woods, who has been told to look elsewhere for next season, will have to step up with his bookend Aiden Tolman suspended. Woods has played all 17 of Cronulla's matches this season while averaging 120 run metres. The veteran prop has collected three tries along the way.

The last-placed Bulldogs have just one player in the top 50 for missed tackles, Adam Elliott (No.17, 45 misses), even though they have conceded more points than all but North Queensland and Brisbane. Cronulla, in contrast, have the No.1 player for missed tackles, Toby Rudolf (68), and another three in the top 30 despite their eighth-placed ranking for points conceded. 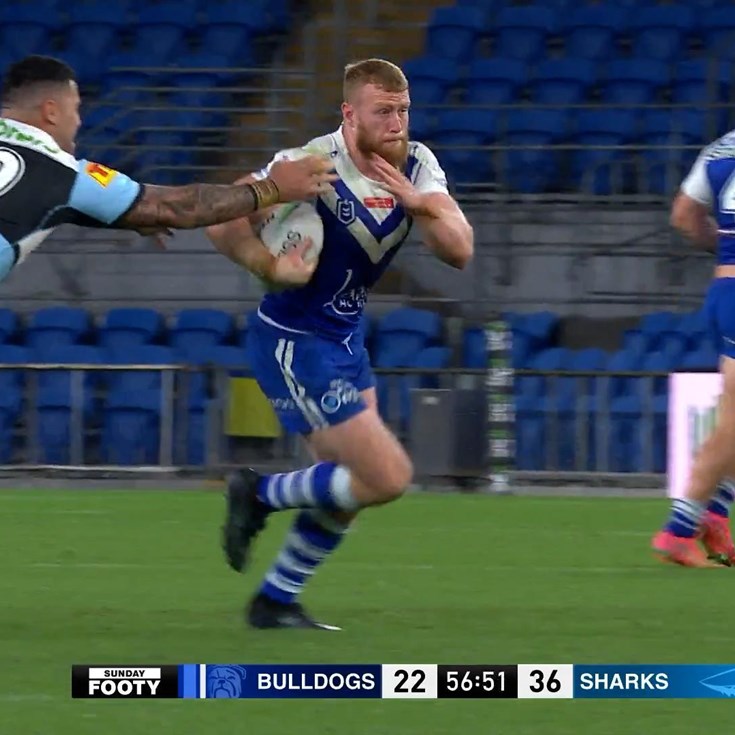