It's desperation stakes with both Canberra and St George Illawarra badly needing a win to stay in the dogfight for a spot in the finals.

And the Dragons' cause hasn't been helped at all with the loss of skipper and halfback Ben Hunt (broken arm) for a month.

Both teams slumped to morale-sapping defeats in round 20, the sluggish Raiders having their three-game losing streak snapped in a 34-24 loss to finals rivals Newcastle while an undermanned Dragons squad was thumped 50-14 by Souths for their third heavy loss in succession.

Canberra, crucially, have the positive reinforcement of their recent win streak to lean on but the Dragons must rely on the boost derived from key players returning after serving COVID breach bans.

It couldn't be closer on the table, the two teams equal both on points and differential with the Raiders given the nod for eighth spot based on their having scored more points so far this season - 383 to 382.

Both teams also have a tough run into the finals with Canberra facing Melbourne, Manly and the Roosters in their last four games while the Dragons have the Panthers, Roosters and return date with the Rabbitohs.

Given the circumstances getting the two points here could be season-defining.

​Ryan Sutton returns from a chest injury at lock so Hudson Young shifts to the second row and Corey Harawira-Naera moves to the bench.

Dunamis Lui and Siliva Havili were the first two players cut from the squad 24 hours before kick-off.

The Raiders have won three of their past four games against the Dragons.

Cody Ramsey (wrist) will play after missing last week's loss to the Rabbitohs.

Corey Norman shifts from centre to five-eighth and Jayden Sullivan drops to the reserves to allow for Ramsey and Zac Lomax to form the new centre pairing.

Sullivan and Daniel Alvaro were the first two players cut from the extended squad on Thursday.

The Dragons have conceded 114 points in three losses since their bye in round 17.

Adam Clune v Sam Williams: Adam Clune needs to adequately fill the void left by Hunt and his kicking game. The departure of George Williams opened the door for Sam to take the No.7 jersey. He needs to control proceedings and keep his side in control of both their play, and their emotions. If the Dragons are to make the finals, Corey Norman and Jayden Sullivan need to give their teammates good field position and decisive ends to sets.

There’s something about the Green Machine which throws a spanner in St George Illawarra’s works - in the past 20 years they have played 27 times with the Dragons victorious on just six occasions. 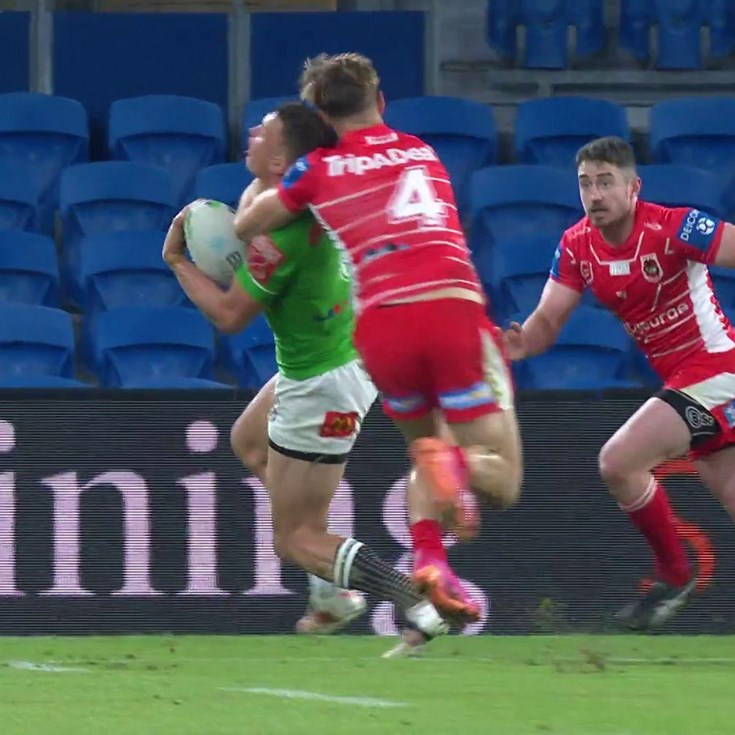 Sims charged for tackle on Smith-Shields