After surviving a tense battle with the Sharks to remain in the top eight, the Knights can't afford a slip-up against the bottom-placed Bulldogs.

With the Knights' points differential the worst of the seven teams battling for the last two spots in the eight, finishing in a tie for eighth spot isn't an option.

The Bulldogs will again search for some positives to end another unhappy season.

The arrival of more than half a team's worth of talent before the 2022 campaign means those on the books now need to prove their worth.

Going back to last year, Canterbury have won five of their last 41 matches.

Bulldogs: Lachlan Lewis starts at five-eighth in place of Jake Averillo, who is out with a foot problem and a calf strain.

Corey Allan, a late withdrawal due to illness on Sunday, is back on deck and straight into the starting side.

Matt Doorey is 18th man, with Watson Heleta dropping out of the squad an hour before kick-off. Falakiko Manu and Chris Patolo were left out on Friday.

The Bulldogs have won eight of their past 10 games against the Knights.

Knights: Tyson Frizell has accepted a one-game ban for a high tackle on Sharks fullback Will Kennedy with Brodie Jones stepping up to start in his place.

The loss of Daniel Saifiti to a knee injury sees David Klemmer move in to the starting side.

Jirah Momoisea will make his NRL debut from the bench after overcoming a ruptured Achilles earlier this year.

Chris Randall will provide utility cover from the bench this week with Roosters-bound livewire Connor Watson to start.

Nathaniel Sasagi is the 18th man. Pasami Saulo dropped off the reserves list on game day after Jack Johns and Phoenix Crossland were omitted 24 hours before the game.

The Knights are aiming for two wins in a season against the Bulldogs for the first time since 2013.

Luke Thompson v David Klemmer. Thompson returns from suspension and Klemmer is likely to shoulder more of the load considering the knee injury suffered by Daniel Saifiti last weekend. Both these players love to lead forward packs with their actions, not words. 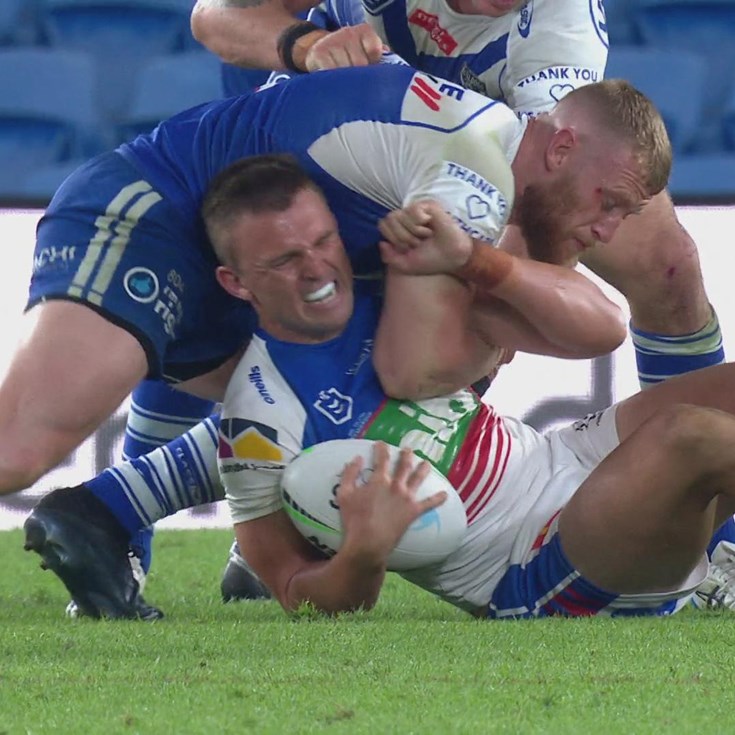 Okunbor demanding serious consideration for try of the year

Barnett with the huge effort play for Saifiti