Latrell Mitchell's season could be in jeopardy with the star Rabbitohs fullback charged with a grade two reckless tackle for an incident that left former teammate Joey Manu with a suspected fractured cheekbone.

South Sydney recorded a 54-12 win against their bitter rivals but the 57th-minute incident involving the pair overshadowed the one-sided contest with Mitchell sin-binned after his shoulder connected with Manu's face.

An emotional Manu remonstrated with Mitchell as he left the field and was taken straight to hospital with what his coach Trent Robinson said was a depressed cheekbone fracture.

Robinson was left fuming at Henry Perenara's decision-making in the NRL Bunker process throughout the incident with Manu instigating a clash with Mitchell a minute after the collision to flag his injury. On Saturday morning Mitchell was charged by the match review committee with grade two reckless high contact, and he faces a suspension of between six and nine matches.

Mitchell served four weeks for dangerous contact on Wests Tigers winger David Nofoaluma earlier this year. If charged, any guilty finding for the Manu incident will affect the fullback's chances of featuring for the Rabbitohs in the coming weeks.

The match review committee will announce any charges coming out of the match on Saturday.

Robinson lashed out at the decision not to send Mitchell off for the rest of the game, calling the Bunker "an absolute farce" over the Manu incident.

"They get forced into finally making a call, and then they send him for 10 in the bin. Ten in the bin? It's laughable."

He was equally as frustrated with Mitchell's effort despite acknowledging his ongoing fondness for the former Roosters premiership-winner.

"Trell plays on the edge and that is what makes him a great player to watch," Robinson said.

"I'm angry at him for that incident. I absolutely love him and I'll say frustrated at that point because he's just cost one of his good mates the rest of the season and fractured his cheekbone.

"It's not on. It really hurts. But also Latrell plays the game a certain way and it frustrates opposition fans and it would've frustrated ours but we got to enjoy him for a long period of time.

"But you can't hit someone with that much force and not suffer the circumstances."

Rabbitohs coach Wayne Bennett returned serve to Robinson in his post-match press conference before opting to steer clear of the Mitchell incident.

"Trent's got a couple of those players [who play on the edge] himself that he coaches, so I don't know what he's looking over the fence at us for," Bennett said.

"We'll handle our own situation and will address it if we have to. It’s a matter on report before the judiciary so I'll just leave it at that.

Mitchell returned to the field with 12 minutes remaining to ice South Sydney's third-straight win over the Roosters with a try that included him throwing the ball towards players from his former club.

Not new territory: Bennett confident Bunnies can fire in finals without Mitchell

"It's all emotion, the moment gets to them," Bennett said.

The Bunnies forward pack ran through a depleted Roosters outfit in the first half to set up a 24-6 lead before the side repelled a mini fightback from the Tricolours.

A four-minute double to veteran prop Mark Nicholls – the first of his nine-year career – signalled the Rabbitohs' dominance in the ruck early while Alex Johnston finished with a hat-trick.

Adam Reynolds' night appeared over in the first half after he limped from the field with a knee injury but the Bunnies playmaker returned late when South Sydney appeared to have lost their way in the second half.

Robinson's woes continued immediately after the break with experienced forward Siosiua Taukeiaho leaving the field with a knee injury after being twisted awkwardly in a tackle by Liam Knight.

Knight was placed on report for the incident before the Roosters prop managed to return later in the second half with a heavily strapped knee in another incident that drew ire from Robinson.

Frustration and love: Robinson shares his thoughts on Latrell Mitchell

Ben Thomas (head knock) also failed to return for the Tricolours while forwards Isaac Liu (high contact) and Fletcher Baker (crusher) were both placed on report for separate incidents.

The Roosters narrowed the lead to 24-12 in the 48th minute with Sam Verrills crossing before the Rabbitohs ran in five tries in the final quarter of the match to compound Manu's injury.

"I was really proud of them," Robinson said.

"We came out after halftime and got to 24-12. We got stripped way too easily on the edge and that was a tactical thing.

"It was right there and we had it at 24-12. Trell goes to the bin but then we go down the other end and let a try in.

"They're the best team in the comp at shifting the ball. That's what cost us the game." 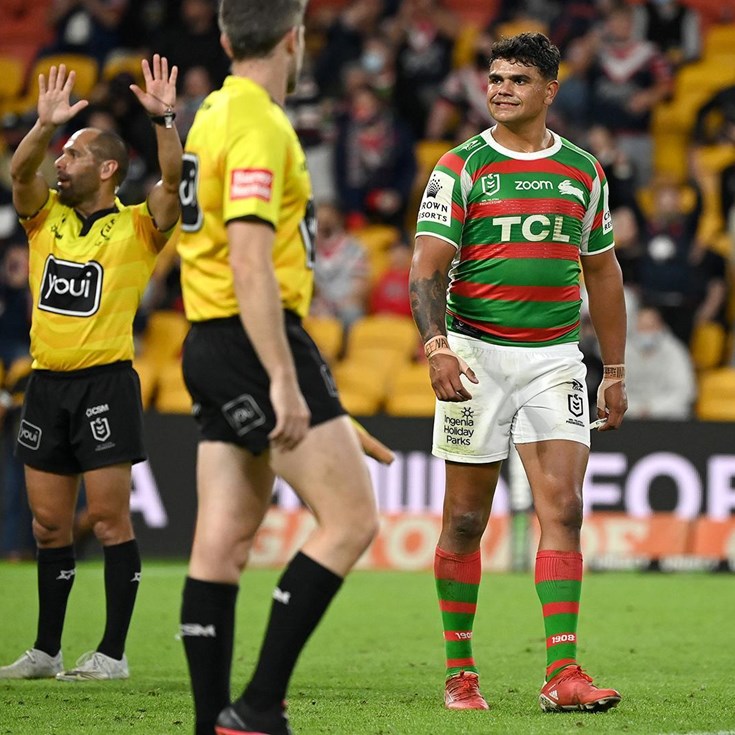 Alex Johnston grabs another hat-trick against the Roosters