Alex Glenn fittingly finished his career on a high as Rabbitohs-bound pivot Anthony Milford put on a clinic to inspire the Broncos to victory over the Knights.

Injuries to prop Payne Haas (high-ankle sprain) and hooker Jake Turpin (suspected fractured jaw) were the only downsides for Brisbane in their 35-22 triumph at Suncorp Stadium on Saturday.

Newcastle coach Adam O'Brien wasn't too concerned heading into a finals clash with the Eels given he rested a slew of players while David Klemmer is expected to overcome a rib cartilage injury.

O'Brien benched star fullback Kalyn Ponga and halfback Mitchell Pearce after 45 minutes to keep them fresh for next week.

Brisbane led 18-4 at half-time and went on with the job before the Knights found their rhythm and trimmed the margin.

The afternoon was all about captain Glenn, who will enter retirement as the fourth most-capped Brisbane player with 285 games.

Coach Kevin Walters said the one-club second-rower, who debuted in 2009, "typifies for me what a real Bronco looks like".

"He gives his all every week and he's had some great years here and captained the club, so it was fitting for Alex," Walters said.

"And I thought they really had a good crack today for him and that's what's most pleasing from my end ... very happy for Alex and all those guys moving on that they could finish with a win."

After seven seasons and a grand final appearance for the Broncos, it was also an emotional farewell game for five-eighth Milford.

The enigmatic playmaker looked unburdened as he produced 234 metres, three line breaks, a try assist, a field goal and a try.

While Walters opted not to keep Milford next season, he still holds the 27-year-old Samoan international in high regard.

"It's been a tough year for a lot of players and Milf's in that category. He's a happy lad in there now and he's off to Souths next year, so they've got a good one."

Representative winger Xavier Coates is also among the departing group with the Queenslander to join Melbourne in 2022.

The Broncos are set to finish the season in 14th place with seven wins, an improvement on the three victories they tallied in 2020.

Walters sees a Red Hill resurgence on the horizon.

"We're a big club, we're a strong club, and we need to reward those people that support us. Today was a good reward for those people. Is there more to come? My word there is," he said.

"The NRL's tough. It's tough going. It is - for coaches, players, staff, everyone involved. Even the media, it's tough.

Some more Milford magic leads to a try

"If you don't aim up every week, you get found out. And there were some games this year where we weren't where we needed to be and we got caught out.

"But I know there's a different mentality in that dressing room now about playing for each other and playing for the club and all that the club represents."

Broncos forward Kobe Hetherington scored in the fifth minute after Coates knocked back a Milford bomb to halfback Albert Kelly.

Brisbane extended their lead as Milford and Kelly combined in the lead-up to Herbie Farnworth assisting veteran winger Corey Oates.

It took some trademark Ponga brilliance to get the Knights on the board in the 27th minute with the fullback popping up on his favoured left edge and slinging a cut-out ball to Enari Tuala.

Brisbane play to the whistle for the opener to Hetherington

The Broncos looked to have responded with a magnificent long-range try as Farnworth streaked away before perfectly kicking ahead, but Tesi Niu was ruled to have bobbled the putdown.

The roles were reversed five minutes later with Nui placing a grubber for Farnworth, who made no mistake of the grounding.

Milford then collected a parting gift in the second half, sending Farnworth through a gap and backing up to touch down.

Starford To'a's try for Newcastle was cancelled out by an intercept effort from promising Broncos rookie Selwyn Cobbo.

All effort until the end, Glenn came up with a crunching cover tackle on Pasami Saulo to save a try. The revered leader was met with emotional embraces from his teammates at full-time. 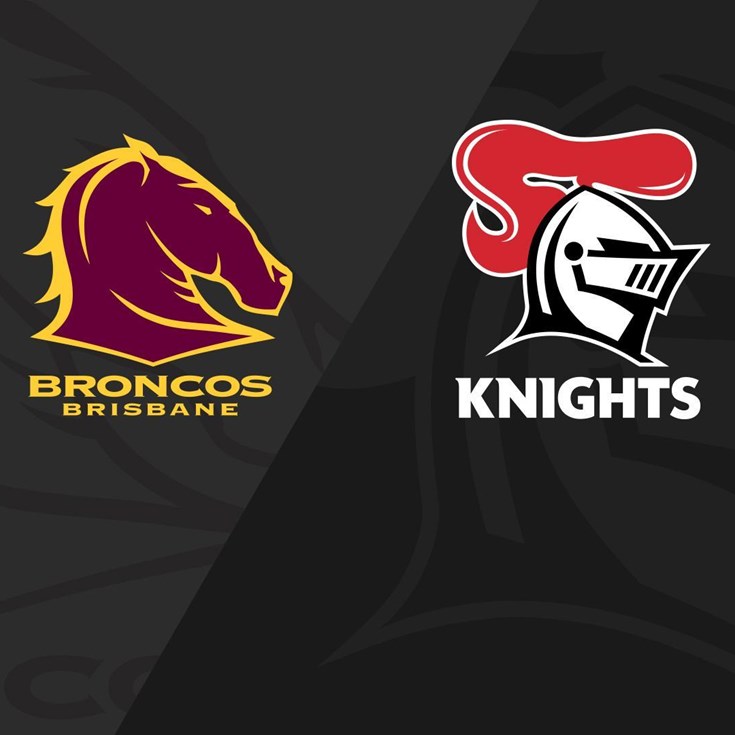