The fifth-placed Roosters will be the red-hot favourites for Saturday's elimination final but that won't bother a Titans side coming off arguably its best performance of the season.

Trent Robinson's injury-ravaged squad has performed admirably despite having millions of dollars of its salary cap on the sidelines to come within a whisker of a top-four finish.

They warmed up for the finals with an impressive win over the Raiders.

The Titans' 10-14 record was enough to scrape into eighth spot with a better differential than the Sharks but they saved their best till last, piling on a big score against the Warriors in a game they had to win by at least 11 points.

Gold Coast, as the only remaining Queensland team in the playoffs, should at least have the crowd on their side even though they'll be lining up a long way from home.

With a few attacking weapons, they represent a challenging task in week one of the finals.

Roosters: Jared Waerea-Hargreaves (knee) a confirmed starter after missing for each of the last two weeks.

Isaac Liu starts at prop with Siosiua Taukeiaho to come off the bench. Victor Radley returns to the starting pack, pushing Egan Butcher to the bench.

Dale Copley is the 18th man with Ben Thomas dropping out of the playing squad an hour before kick-off. Ben Marschke and Naufahu Whyte were the two players omitted 24-hours before the match.

The Roosters have won their past seven games against the Titans.

Titans: Kevin Proctor (shoulder) returns to the second row, while David Fifita remains on the bench as he has for six of the Titans' past seven games.

Fifita will require a pain-killing injection to his ribs on Saturday prior to taking the field after damaging cartilage last month.

Sam McIntyre is the 18th man, with Toby Sexton dropping off the reserves list on game day. Greg Marzhew and Anthony Don were dropped from the squad 24 hours before kick-off.

Over half of the Titans' line-up will be playing their first NRL finals match.

James Tedesco v Jayden Campbell: Tedesco has been simply brilliant through the closing rounds of the season, leading the way with some huge performances.

AJ Brimson could have been a season-ending loss for the Titans but Campbell's irrepressible form has given the Titans a new edge in attack and his scintillating two-try effort against the Warriors has him primed for a big game in his maiden finals match.

His tally of 17 is also the most in a season by a Titan, eclipsing David Mead and James Roberts (both 16). The second-best try-scoring forward this year is the Roosters' own edge weapon Sitili Tupouniua (12). 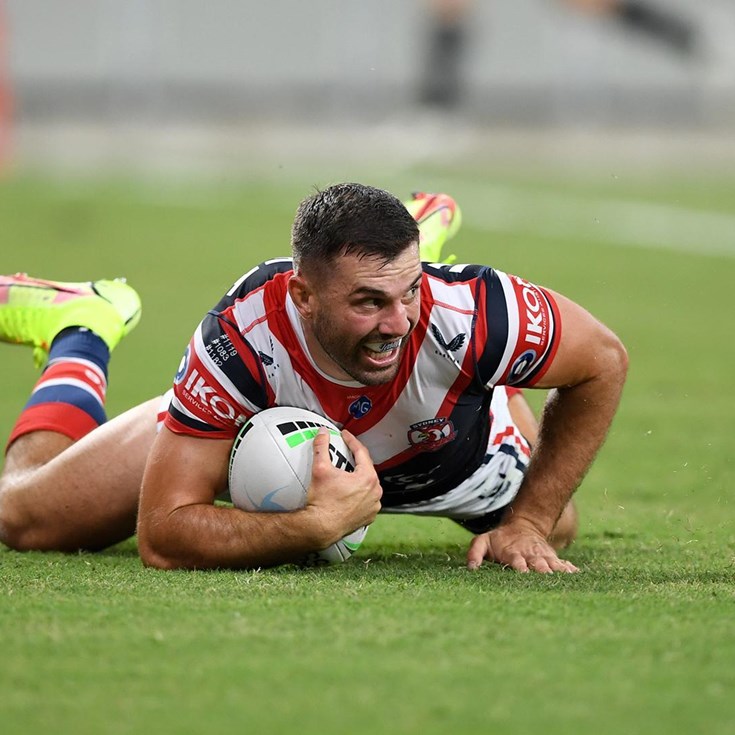