Player ratings for the Sea Eagles in their Telstra Premiership qualifying final clash with the Melbourne Storm at Sunshine Coast Stadium.

1. Tom Trbojevic: Tried hard, topping the run metres for Manly with 151, but was mostly well-contained by a swarming Storm defence. Never stopped trying to make something happen. Was outplayed by Ryan Papenhuyzen. 5/10

2. Jason Saab: Tried hard, constantly fronting up for hard carries out of the red zone, and was rewarded with Manly's first try when he out-jumped opposite number Isaac Lumelume. Doubled up with an enthusiastic kick-chase in the second half. 8

3. Brad Parker: Was solid in defence and ran hard but opportunities to shine were scarce. 5

4. Morgan Harper: A nightmare first half included two drops and a controversial disallowed try. Things didn't get much better in the second half. 3

Air Saab scores a much-needed try for the Sea Eagles

5. Reuben Garrick: With Manly constantly on the back foot and running mate Tom Trbojevic well-contained the winger didn't really get a sniff. Produced a nice grubber to force one repeat set then created Manly's second by reefing a brave punt downfield on zero tackle from his 20m line. 6

6. Kieran Foran: Staunch defensively but couldn't impose himself in attack. 5

7. Daly Cherry-Evans: Tried hard to get his side back in the contest with some incisive kicking and produced the Sea Eagles' first points with a pinpoint bomb for Saab. Defensive error gifted Papenhuyzen with a try. 5

8. Josh Aloiai: Ran and tackled hard when on the field but only played limited minutes (38). 4

15. Karl Lawton: Workmanlike but was unable to find any holes in the Storm ruck defence. Defended with conviction to rack up 35 tackles. 5

10. Martin Taupau: Made good ground early and showed up defensively but errors crept in to take the gloss off. Another who failed to hit 40 minutes. 4

11. Haumole Olakau'atu: An improved effort after a subdued few weeks. Enthusiastic running produced some half-breaks on the right but didn't result in anything of significance. 6

12. Josh Schuster: Hardly sighted before being put on report for a dangerous tackle on Jahrome Hughes. 4

13. Jake Trbojevic: Typical whole-hearted effort as he tried to stem the tide. Topped the tackle count with 48 and produced one good flick pass but the ball was turned over immediately. 6

14. Dylan Walker: Threw himself into the game both in attack and defence, producing some of Manly's rare good moments. Only player other than Turbo to hit triple figures in metres (12 runs for 102m). 6.5

16. Sean Keppie: Received just 26 minutes with the contest well over before he even took the field. 2

17. Taniela Paseka: Charged hard into the defence and was rewarded with good metres, his nine carries tallying 88m. 6

20. Curtis Sironen: Played junk minutes at the end of the game but tried to get involved. 3 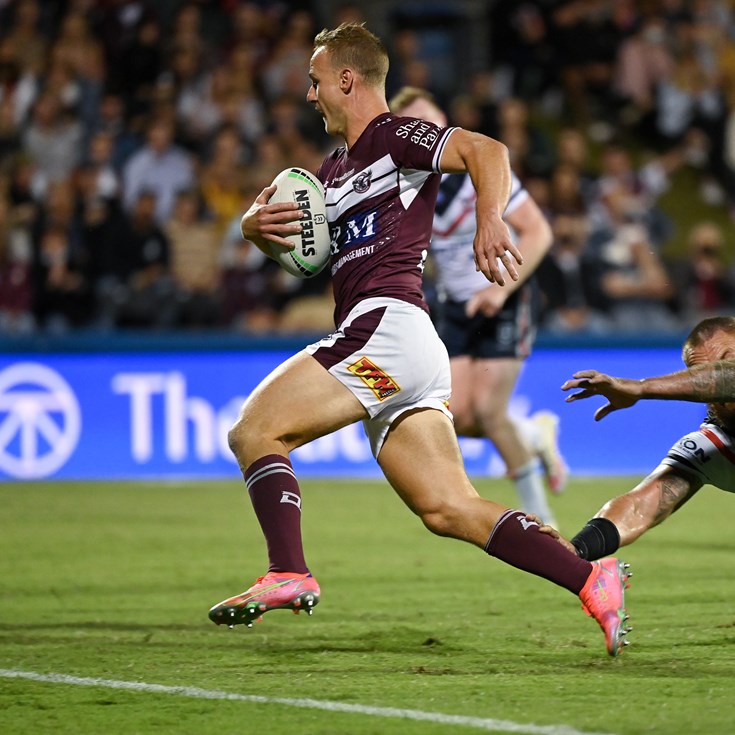