Steve Roach was the country's leading prop during the late 1980s. Wollongong-raised Roach was a mainstay of NSW and Australian teams during this period, when he became a cult figure at Leichhardt Oval.

At 178cm, Roach was known for his powerful runs close to the rucks. Large, skilful hands enabled him to become a wonderful ball player, and he combined this with a fearless, sometimes fiery approach.

Roach's representative career began in 1984 when he was called into the NSW side.

Barring injury, he was a regular selection until 1991, except in 1989 when frequent excursions to the sin-bin contributed to his omission. A broken ankle curtailed Roach's representative career, after 17 Origin appearances and 19 Test caps.

The value of ''Blocker'' Roach to the Tigers was emphasised by two heartbreaking grand final losses when his presence was sorely missed. In 1988, he was unavailable because of a four-week suspension for a tackle on Penrith's Chris Mortimer in a semi-final playoff.

In 1989, when the Balmain pack was the most dominant for much of the season, Roach helped the Tigers to a 12–2 halftime lead over Canberra. However, he and Sironen were controversially replaced late in the second half, and the Tigers succumbed in extra time 19–14.

“Blocker was a wonderful mix - a big, bruising bloke who... possessed the best and most subtle ball skills since the great Arthur Beetson." 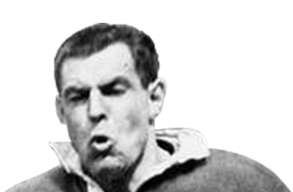