The key team changes and NRL Fantasy form guide heading into the seventh round of the 2018 Telstra Premiership season.

Bulldogs: Unsurprisingly the Dogs are unchanged after thumping the Cowboys last week. Raymond Faitala-Mariner's 71 on Saturday pushed his season average past the 50-point mark and he's heading towards borderline keeper territory. Moses Mbye is still yet to score below 40 apart from his injury five minutes into round 4.

Roosters: A few changes here, with Mitchell Aubusson starting at centre and Joey Manu moving to the wing with Reece Robinson dropping out, and Frank-Paul Nuuausala joining the bench. Sio Siua Taukeiaho is named among the reserves. Ryan Matterson has emerged as a keeper contender with scores of 71 and 79 in the last fortnight bringing his average for the season up to 55. He's scored three tries in the past two games to go with 40+ tackles in both weeks, and now has three scores above 60 (all from 80 minutes) and three below 45 (one 80 minutes, two 60 minutes). Elsewhere Latrell Mitchell has found some form while James Tedesco is scoring fine in Fantasy even when he struggles to make an impact in games.

Warriors: Solomone Kata has an ankle injury but has been named anyway, while Simon Mannering has been named to make his first start of the season in the second row. Mannering's price is plummeting after a couple of games off the bench. Leivaha Pulu is out with a foot injury and Albert Vete joins the interchange. Shaun Johnson is averaging just under 59 despite only crossing for a single try so far this year, while Tohu Harris remains super consistent.

Dragons: No changes. St George Illawarra romped to a 40-20 win over the injury-hit Sharks last week but worryingly they still appeared to split the Fantasy points between them. Matt Dufty needed two tries to reach 50 while Euan Aitken scored his fifth of the year to make 45, and on current evidence they may need to keep finding the tryline to be Fantasy keepers. In saying that, the Dragons have been on fire this year so it's not beyond the realms of possibility that they both keep scoring.

Broncos: Jack Bird holds onto his role in the halves with Kodi Nikorima to return from injury via the bench, with Tevita Pangai jnr named to start and Sam Thaiday moving back to the interchange. Bird (44) could become a consistent option for the troublesome centre position if he holds onto a role in the Brisbane halves long-term. Corey Oates scored 70 last week but the more interesting news was the performances of cash cows Jaydn Su'A (60) and Jamayne Isaako (54). At $323,000 and with a negative break even Su'A will be a popular buy but his scoring has been inconsistent – he made 10 and 28 in his first two games of the year before making just 19 in 71 minutes against the Knights in round 5.

Storm: Will Chambers is back in the Melbourne 17, replacing Young Tonumaipea. Ryley Jacks made a solid return to NRL footy in every way last week – he was error-free, did all the little things right, his team got the win and he scored 42 Fantasy points. More of the same could earn him close to $150,000 in price rises if he holds onto the halfback spot ahead of Brodie Croft. Cameron Smith's 23 against the Sharks a few weeks ago already feels like a distant memory after scores of 84 and 64 in the past two weeks.

Rabbitohs: Sam Burgess returns to the side at lock and is now available as a dual-position 2RF/FRF in Fantasy, with Cameron Murray a chance of being a late inclusion in the starting side after being named among the reserves. Jason Clark moves back to the bench and Kyle Turner drops back to the reserves. Damien Cook is arguably the best captaincy option in Fantasy right now. Richie Kennar has just about hit peak price although his 21 break even is achievable, while Adam Doueihi didn't get on the field last week and is a definite sell for those who still have him.

Raiders: Unchanged. Canberra got a win last week but still aren't producing many big Fantasy scores, with the returning Josh Papalii their only player to hit 50 against the Eels. Joey Leilua managed 44 without a try following his double the week before, Nick Cotric is coming off back-to-back 40s but managed just 8 in round 4, while Jarrod Croker is averaging 40 over the past month. At least one of those three is likely to become a keeper in the tricky centre position by the end of the season.

Wests Tigers: Elijah Taylor returns at lock and Pita Godinet is on the bench with Chris Lawrence (hamstring) and Josh Reynolds (shoulder) out of the side. Try not to panic, but Luke Brooks is coming off scores of 77 and 74, and neither looked like a fluke. The Tigers No.7 is in great form, but has never been a Fantasy option before now. He averaged 35 in the first month of the season, but if he's capable of becoming a 50-point player this year he's good value now at $671,000. He's still a riskier option than established guns like Shaun Johnson or Daly Cherry-Evans though. Robbie Rochow has pretty much peaked after $207,000 in price rises.

Knights: Brock Lamb has been replaced by Jack Cogger in the halves, while Mitch Barnett is back from suspension at lock and Daniel Saifiti drops out. If you're in the hunt for a point of difference you could do worse than Aidan Guerra, who has scored above 50 in every round bar one (when he made 42), plays in the first major bye round if he doesn't get picked for Origin, and is owned by just 2.5% of Fantasy teams.

Cowboys: Is Jason Taumalolo back? He's coming off an 81, his average is back above 51, and his price has fallen by $130,000 so far this season. He'll also play in round 13, the first major bye round. He has been outscored so far this year by big-minute second-rower Coen Hess, who remains $15,000 cheaper, while Johnathan Thurston is an urgent sell for those who still have him.

Titans: Nathan Peats (ribs) and Dale Copley (hamstring) are out, with Tyronne Roberts-Davis joining the backline and Mitch Rein starting at hooker where he should enjoy a few weeks of price rises and presents an intersting cash-down option. Ryan James's return from suspension bumps Max King to the bench. Jai Arrow has been named to play despite suffering back spasms last week and should bounce back from his 38.

Eels: Plenty of changes for the struggling Eels this week with Bevan French (shoulder, round 9), Beau Scott, Tepai Moeroa (concussion) and Kirisome Auva'a (ribs, round 9) out. Jarryd Hayne returns to the side on the wing, with Brad Takairangi at centre, and Will Smith and David Gower joining the bench. Clint Gutherson made a solid return in an otherwise forgettable game for Parramatta against Canberra last week, scoring 40, and he's definitely a potential keeper if and when the Eels start winning games again.

Sea Eagles: Unchanged. Even in a losing side Jake Trbojevic (60), Tom Tbrojevic (54), Apisai Koroisau (64) and Martin Taupau (51) scored well last week, while Daly Cherry-Evans could be in for another big game against the winless Eels. Lachlan Croker just held onto his price with a 25 last week and can be sold at any time.

Sharks: Plenty of changes here, with Paul Gallen (knee) definitely out, Wade Graham (hamstring) probably out – he's in the reserves – and Andrew Fifita (knee) possibly out despite being named to start. It's certainly better news than it could have been after initial fears Fifita had done his ACL on Friday night. Scott Sorensen and James Segeyaro join the bench while rookie Jack Williams is a good chance of playing despite being named in the reserves. There's also another fullback reshuffle with Josh Dugan to wear the No.1 and Matt Moylan bumping Trent Hodkinson out of the five-eighth role, while Jesse Ramien starts at centre.

Panthers: Josh Mansour is out with a broken cheekbone with Dallin Watene-Zelezniak returning from his broken jaw on the wing, and Corey Harawira-Naerea is named at centre. Dylan Edwards has been Penrith's best Fantasy performer this year with 47 points a game at fullback, Trent Merrin and James Fisher-Harris are now dual-position forwards, while the in-form James Maloney has earned $205,000 in price rises in the past three weeks ($134,000 in the past fortnight since his season-high 85). 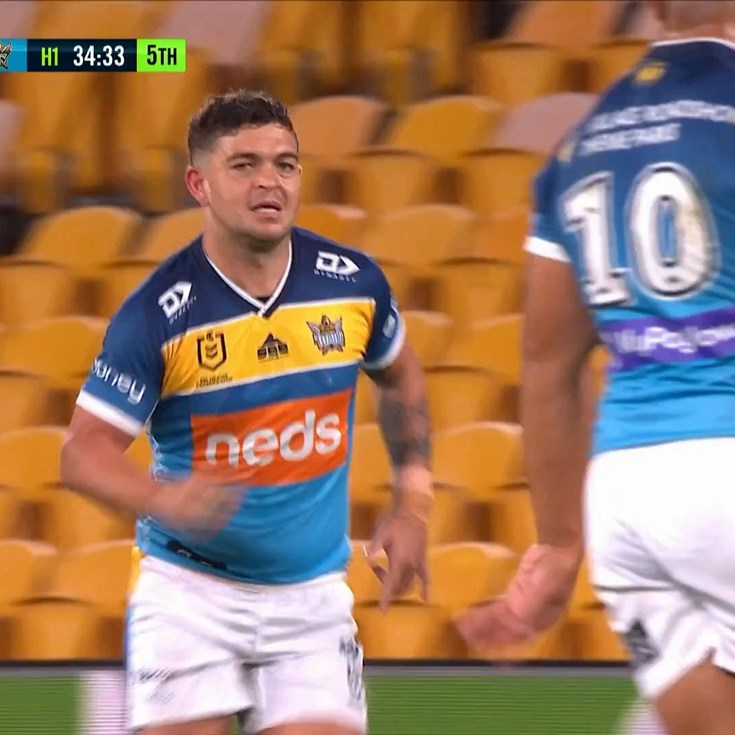