The Rabbitohs finally lost, the Tigers are still roaring and the Roosters put rivals on notice with a thrashing of the Sea Eagles. Check out NRL.com expert Jamie Soward's latest thoughts in this week's Power Rankings.

1. Sydney Roosters (last week: 3)
Not much opposition against Manly but I saw something in that game that gives me the theory that the less structure they play, the better they're going to be because their defence is so good. Their forward pack isn't massive but it's a real working pack and they just look very comfortable in defence. Attack-wise, the less structure the better. The Roosters are building nicely and could be headed to another premiership.

2. Melbourne Storm (2)
A tough place to play but defensively they were sound, and I've said all year that Melbourne do the big games better than anyone else, and they just keep doing it. Cam Smith is on fire with his game management and directing his team around. As long as he's on the field the Storm look like they're going to make it to the grand final.

3. South Sydney Rabbitohs (1)
A disappointing loss just because of the manner they lost it, being shut out for such a long period of the game. The real disappointing thing for Souths was that it was such a big game for a club legend like John Sutton in his 300th game. They looked tired, but they're still strongly placed for a top-four spot and are still one of the favourites.

4. Cronulla Sharks (4)
They keep winning at home and I like how they're tracking. The second half wasn't great but they showed they are one of the teams to beat because they know how to do big games. Andrew Fifita was outstanding and looks like he might've found his feet again after the rep period with Tonga.

5. St George Illawarra Dragons (6)
Great win on the road. I tipped the Cowboys but the Dragons showed they are a real force and it'll do their confidence the world of good. It's a tough environment against a team that had nothing to play for so you don't know what you're going to get. They showed a lack of respect to the Tigers the week before but they went up there and got the job done and that'll narrow their sights for the top four.

6. Brisbane Broncos (7)
I asked for it earlier in the year and I'll ask again - will the real Broncos please stand up. They get beaten by 30 one week and then put up 50 the next week. Milford and Nikorima just played footy against the Panthers, and maybe that's the key - just go out and play and not try to game manage too much. The Broncos looked really good.

7. Penrith Panthers (5)
Wayne Bennett is the master of the bounce back and Penrith got blown away. I'm not sure going into camp a couple of days early worked for the Panthers. They got punched in the face and didn't respond, and this is the worry coming out of Origin. The best thing for them is that play teams out of the top eight over the next month.

8. Wests Tigers (11)
I still don't believe they can make it but funnier things have happened. A great effort to beat Souths, but you always knew the Bunnies weren't going to finish the season without another loss. Moses Mbye is so important to what the Tigers are trying to do. He's something they've lacked - a dominant, fast fullback who's constantly in the right position at the right time.

9. New Zealand Warriors (9)
This team is on tenterhooks at the moment. They needed a win against a top-eight side at home but it wasn't to be and they have a pretty poor record against top-eight opponents. Yes, it was a tight game but when you're in and around those seventh and eighth spots you can't afford to lose home games. I think the Warriors have missed an opportunity this year.

10. Newcastle Knights (10)
Connor Watson took too long to get into the game but when he did he had a big influence on the result. His utility value for that side next year is going to be priceless. I like the way they hung in through the forwards. (Danny) Levi got his running game back, and the master Mitchell Pearce just controlled things. It showed how important a regular dominant No.7 is.

11. Canberra Raiders (8)
Probably should've won and some controversial calls went against them, but what everyone glossed over was that their first half wasn't good enough. They got out-played and it showed why they aren't a top-eight side. That first half simply wasn't good enough for a team wanting to play in the finals.

12. Parramatta Eels (13)
One step further away from the wooden spoon after getting their fourth win. Didn't set the house on fire against the Dogs but they're certainly still showing that desire to keep competing. The challenge for that squad is to finish off the year strong and go into next season with something to play for.

13. Canterbury Bulldogs (15)
The game against Parramatta won't go down as the clash of the year, but the bright light for the Bulldogs is that they get Nick Meaney from Newcastle next year. That's about the only real positive for the Bulldogs at the moment in terms of watching them play. It's not pretty.

14. Manly Warringah Sea Eagles (12)
Some of the efforts against the Roosters were not up to a first-grade standard. Some guys like Joel Thompson, Brian Kelly and the Trbojevic brothers tried, but the Sea Eagles are bare bones at the moment and it doesn't look like improving real soon.

15. Gold Coast Titans (14)
I could've easily had the bottom four teams together. To lead 24-10 away from home, they just shut up shop (was disappointing). There was some big moments in that game that Ash Taylor needs to take control of and he's been disappointing the last two weeks. He's struggling to control games and understand what his team needs at crucial times.

16. North Queensland Cowboys (16)
Really thought they missed a chance to get away from the wooden spoon and that they'd be a lot better than they were. The late change of Te Maire Martin to fullback probably didn't work because he's a ball-running five-eighth. The Cowboys are at the lowest of the low right now. 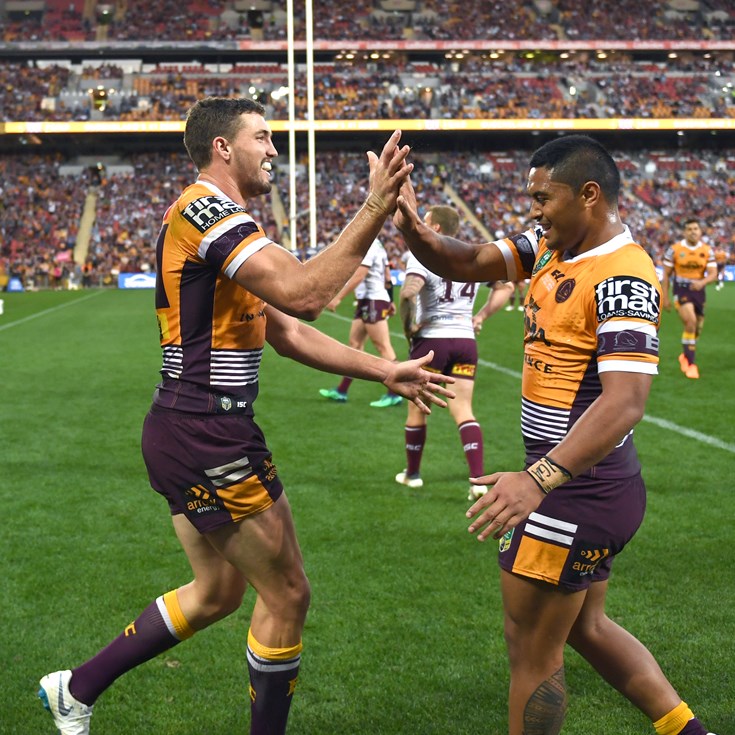